It was just yesterday when we observed the record collapse across the Japanese curve when first the 10Y JGB plunged to an all time low -0.10%, followed promptly by 30Y yields dropping 21bps – the biggest absolute drop in over 3 years and biggest percentage drop ever – to a record low 47bps following Japan’s 30Year auction on Monday night. As we further noted, since Kuroda unleashed NIRP, the entire JGB curve has been crushed and the Monday night rush for long duration debt flattened the curve to record lows. 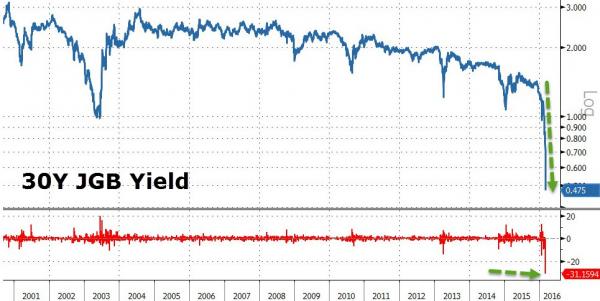 What a difference a day makes.

Just 24 hours later trading of Japan’s government bond futures was halted for less 30 second after the price of the contracts dropped as much as 0.6 percent. As Bloomberg reports, the dynamic circuit breaker on the Osaka Securities Exchange was activated at 12:32 p.m. and was applied to March contracts according to Masaki Takahashi, who works in the market management department at the Osaka Securities Exchange.

The website of the OSE parent Japan Exchange’s website said the circuit breaker is triggered “to temporarily halt trading in order to allow investors to calm down when the market is overly volatile.”

The reason for the trading halt is that a day after sliding to the lowest yield on record, on Wednesday the benchmark 10-year bond tumbled, pushing yields up eight basis points to minus 0.015 percent as of 2:51 p.m. Yields rebounded after dropping more than five basis points to a record minus 0.1 percent Tuesday. The selloff was triggered after an increase in selling into the BOJ’s POMO when the bid-to-cover ratio for debt with 10 to 20 years to maturity rose to 3.58 from 2.93 last week, indicating stronger investor demand to sell, and that investors were looking to offload inventory to the BOJ.

Here is the dramatic surge in yields, the biggest jump since February 12. 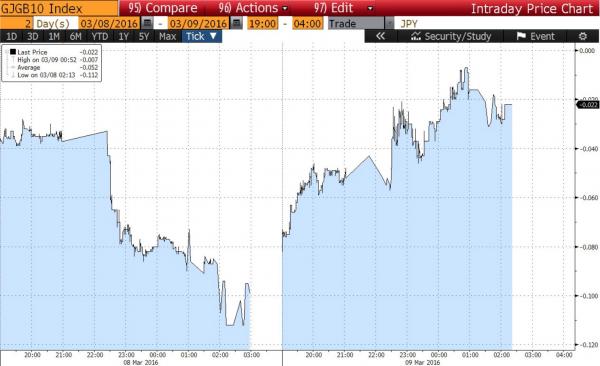 And here is the moment the price collapsed triggering the circuit breaker. 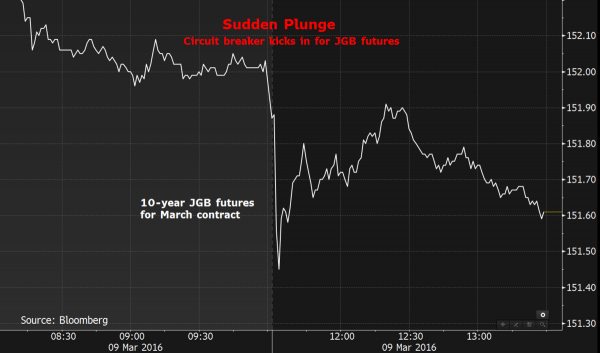 And so the market chaos even among the “safest” of securities, the result of central bank intervention, continues. Bloomberg’s Richard Breslow summarized it best:

Even with QEs creating what look an awful lot like bubbles, it’s been fair to say, those distortions reflected the reaction function of how central bankers interpreted the state of play. Yield levels, let alone negative rates, and volatility are making these guideposts increasingly questionable.

If you look at the yield curves of much of the world, you’d be hard pressed not to conclude we are very much still experiencing a severe global recession. Central bankers may strongly disagree, yet Japanese 10-year JGBs haven’t seen 2% this century. German bunds have backed up to 21bps. Both are likely to increase QE. The U.S. is tightening (?) and 10- year yields are still down 42bps on the year

The Fed wants to raise rates but insists on re-investing the take on its massive portfolio. They act like fund managers protecting their AUM.

The Osaka Stock Exchange had to invoke circuit breakers today on the March JGB future for excessive volatility. Buying panic yesterday to front-run today’s QE buying led to panic selling today into BOJ bids 22 bps through Monday’s close. Oh, and did I mention, ahead of an auction tomorrow. The take-away is mayhem, not analysis.

And now we look forward to an even greater surge in volatility first ahead of tomorrow’s ECB meeting, and then first the Fed and BOJ next week, who – just like everyone else – have no idea what is going on any more.

Written By
Other Writer
More from Other Writer
Source: http://bawerk.net/2015/12/11/how-peak-debt-constrain-the-fed-from-moving-rates-higher/ We have argued for a long time that 2016 will...
Read More