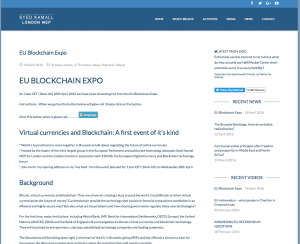 As a group leader within the European Parliament Dr Syed Kamall MEP, the Chairman of the European Conservatives and Reformists Group, has the opportunity to host an exhibition within the Parliament during his 5 year term. He has chosen to have the exhibition on virtual currencies and blockchain technology, an event which is being organised by The Cobden Centre in association with EDCAB.

Attendees will include the World Bank, IMF, OECD, Bank for International Settlements, Europol and the United Nations (UNICRI). It will be the first time these institutions have come together for a blockchain event. They will be joined by academics, startups, established companies and thinkers.

“I am delighted to be hosting this exhibition on blockchain and virtual currencies in the European Parliament. The technology offers some very exciting opportunities but as legislators internationally, we must also make sure that consumers have trust in it,” commented Dr Syed Kamall MEP. “This is a unique opportunity to have some of the world’s top economic institutions here to discuss the issues we need to consider in the European Parliament.”

In theory it could mean that large sections of the economy could trade without centralised intermediaries like banks. The event will discuss the opportunities and the challenges the technology brings and the extent to which regulation will increase confidence in or hinder innovation.

“It is important that we raise these questions”, say Dr Kamall, “we must be innovative, we must look at these technologies and we must also make sure the public and institutions are able to trust it too”.

The Cobden Centre who are organising the event are particularly keen to see how far this technology could go. Founded by UK Member of Parliament Steve Baker, who sits on the Treasury Select Committee, and entrepreneur Toby Baxendale. Mr Baker commented, “At a time when the destructive effects of worldwide, sustained, extraordinary if not emergency monetary policy are becoming evident, this conference on virtual currencies and the blockchain could not be more timely. Market societies need free-market money and at last, as Hayek foresaw in the 1970s, technology is enabling that essential development.”

The Cobden Centre has been interested in this technology for several years and has promoted it as a way of enabling freer trade worldwide. Assets such as stocks, bonds and even intellectual property can be recorded and transferred using distributed ledger systems. The leap in technology has been compared to the invention of the internet as it will allow people to trade and communicate using systems without any centralised control.

“Blockchain technology makes not only private currencies but entire monetary and financial ecosystems possible without the need for central bank management” said Max Rangeley, the editor and manager of The Cobden Centre. “The global economy is about to take a large shift in the direction of decentralisation and disintermediation.”

The exhibition within the Parliament takes place over four days, from the 18th to the 21st of April, with roundtable discussions taking place on the Wednesday. There will be presentations from the IMF, Nasdaq, Bank for International Settlements and OECD among others on how the future of blockchain will unfold. The exhibition is non-commercial and is purely to provide information to policy makers.

Source: http://www.alhambrapartners.com/2015/08/18/the-fomc-gets-slower-still/ Looking back now, January was such a weird month. You had, on the one hand, the barely restrained giddiness of the mainstream…