Economic forecasting, no matter how complex the underlying model may be, is essentially about extrapolating historical trends. We showed last week how economic models completely fail to pick up on structural shifts using Japan as an example. On the other hand, if an economy doesn’t really change much, as in the case of Australia over the last thirty years, model “forecast” are generally quite accurate. However, spending millions of dollars to do the job of a ruler doesn’t seem like wise resource allocation to us. That said there’s obviously a very limited market for model based GDP forecast and most of them are not exchanged among pure market based players, but rather between governmental funded agencies. True, Wall Street spews out their sell-side GDP propaganda on a regular basis, but claiming international banking is anything akin to a free market is absurd. GDP forecasting is something only wasteful organizations do and that should tell you all you need to know about these exercises in futility. 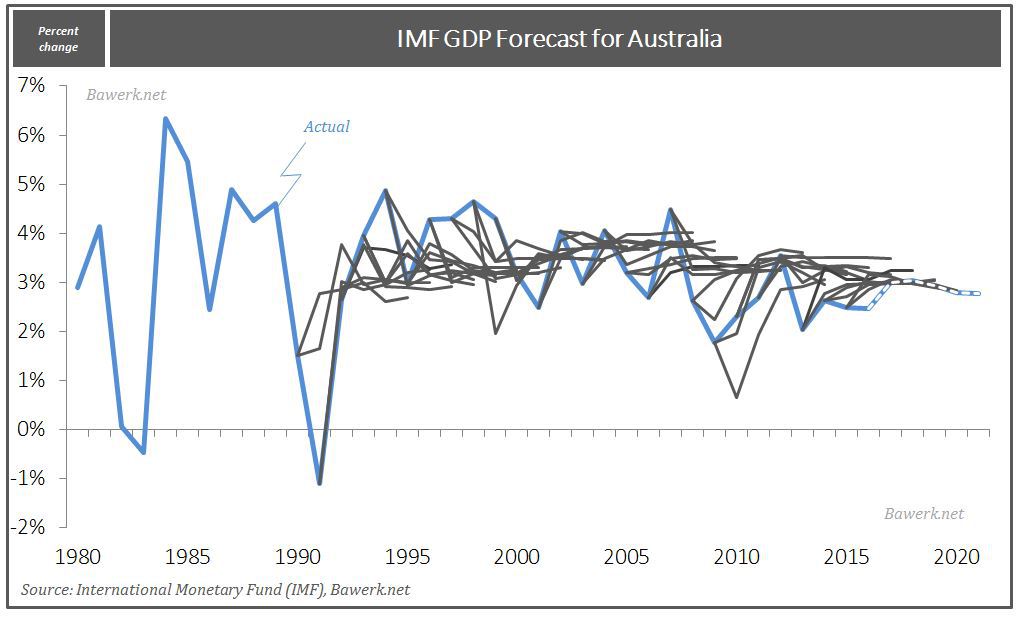 Take the latest IMF forecast for China as a half decent example. According to the IMF, the credit junkie known as China, which needed one trillion dollar in fresh credit in the first quarter alone to create GDP “growth” of somewhere between 6.3 and 6.7 per cent (265 billion dollars for the quarter) will continue to race ahead with six per cent growth for the foreseeable future. The Chinese economy is 100 per cent dependent on ever more money and credit expansion to maintain its completely unsustainable momentum and will very soon come crashing down. And by the way, China’s reported GDP numbers are obviously grossly overstated anyway. 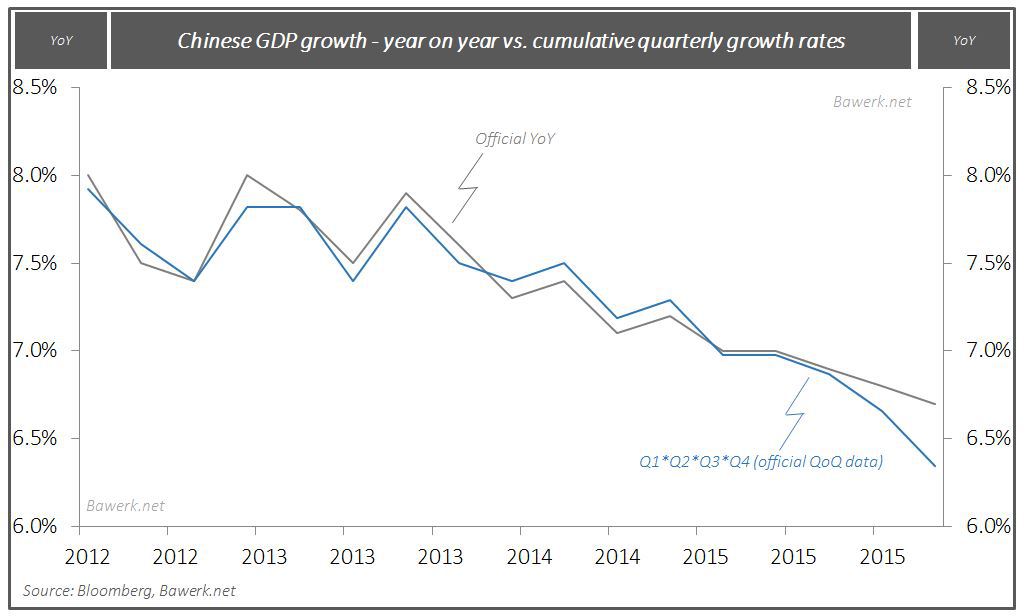 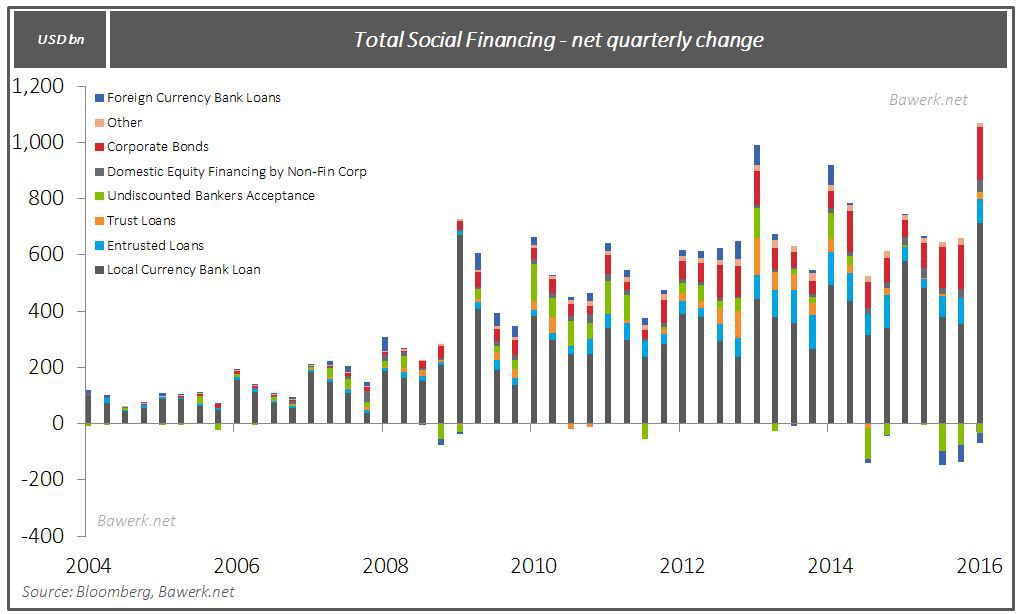 Peddling IMF-fiction though becomes even clearer when we reverse engineer their GDP forecast based on traditional growth models. We know the Chinese labour force is shrinking and the millions of underemployed peasants which used to be the backbone of China’s success are close to exhausted. As the labour force contracts and more resources are spent on taking care of the unproductive members of society savings, and hence investments, will also contribute less to growth going forward.

So how do IMF economists come up with their 6 per cent forecast? Simple, they add to the total factor productivity assuming China with its credit dependence and excess capacity somehow will suddenly become much better at allocating and utilizing its resources. The problem with this line of thinking is that a more efficient resource allocation today will crush all those factories with excess capacity. In other words, to boost TFP a short term recession is a necessity. Avoiding the recession, id est using ever scarcer capital to fund zombie businesses will wreak havoc with future TFP growth.

In conclusion, the chart below is utter nonsense as the internal dynamics between capital, labour and productivity does not add up. 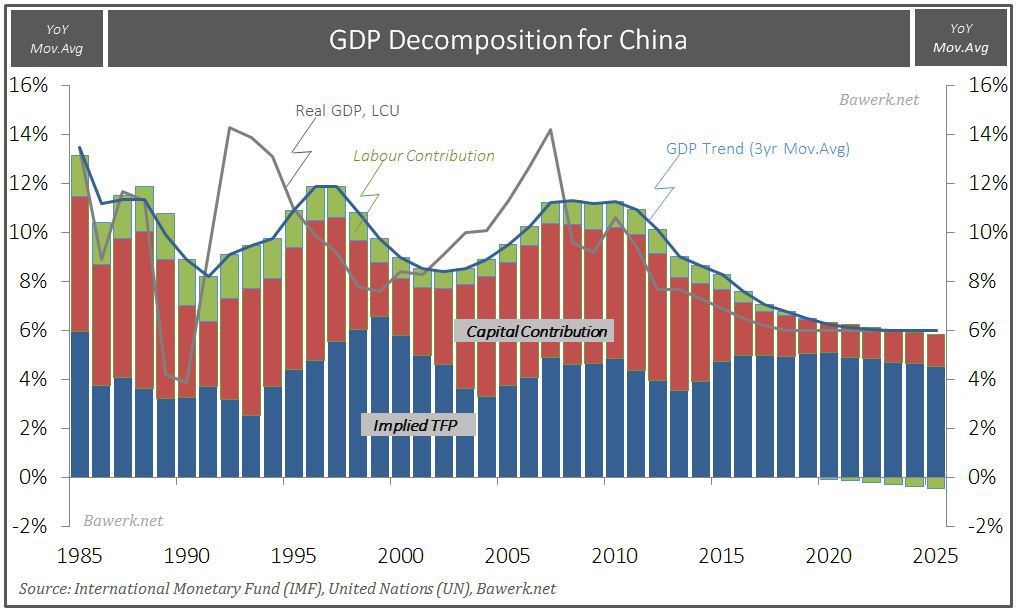 True believers want to think China will continue to grow at breakneck speed and the IMF is feeding them what they want to hear to lift animal spirits accordingly. When the house of credit-cards comes crumbling down the IMF will once again be proven to have completely missed an obvious structural shift as the Chinese economy will linger on like Japan has done over the last three decades.

Written By
Other Writer
More from Other Writer
By Doug French Every 10 years or so there is a banking crisis....
Read More