“So there is another reason why Europe isn’t growing and it’s one the central bank can do nothing about. Namely, the 19 governments of the Eurozone and the super-state in Brussels have essentially outlawed it. If you want to know why growth is so tepid just examine the Eurozone’s massive barriers to enterprise and work in the form of taxes, regulation, welfare state extravagance, crony capitalist subsidies and privileges and labour law protectionism.

In a word, the problem is not that private sector credit is too niggardly; it’s that the leviathan state has crushed the ingredients of supply side enterprise and growth. When the state budget consumes 50% of GDP, and its tentacles of regulation and intrusion penetrate most of the rest, the central bank’s printing press is impotent.”

The history of economic central planning is not exactly glorious. The Soviet Union’s economy finally collapsed in the late 1980s, but not before over 20 million of its citizens had been murdered. The People’s Republic of China started implementing meaningful economic reforms in 1978, after having terminated the existence of over 45 million of its own people. Central planning in Nazi Germany was admittedly successful in bringing down the domestic unemployment rate, but the success of its wider economic legacy is debatable. Günter Reiman in ‘The Vampire Economy: doing business under Fascism’ highlights the process involved in, for example, a German carmaker of the regime purchasing 5,000 rubber tyres: 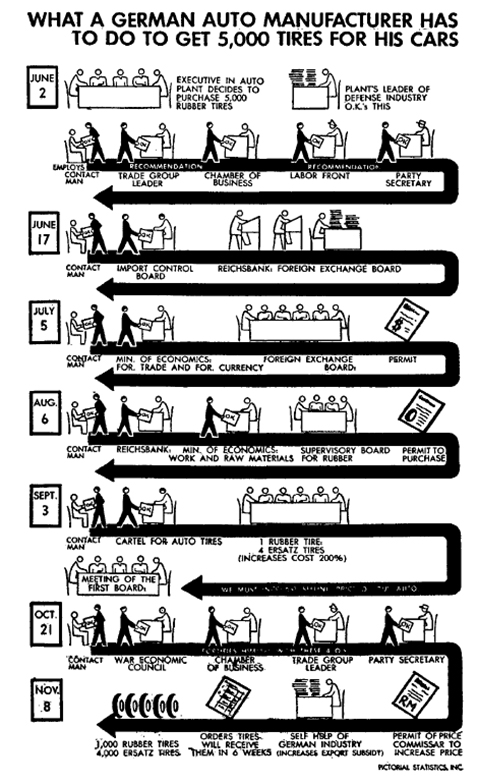 The process culminates in the delivery of 1,000 rubber tyres and 4,000 ersatz tyres, albeit after five months.

Ludwig von Mises, in his magnum opus ‘Human Action’, wrote on ‘The impossibility of economic calculation under socialism’:

The paradox of “planning” is that it cannot plan, because of the absence of economic calculation. What is called a planned economy is no economy at all. It is just a system of groping about in the dark. There is no question of a rational choice of means for the best possible attainment of the ultimate ends sought. What is called conscious planning is precisely the elimination of conscious purposive action..

The mathematical economists are almost exclusively intent upon the study of what they call economic equilibrium and the static state. Recourse to the imaginary construction of an evenly rotating economy is, as has been pointed out, an indispensable mental tool of economic reasoning. But it is a grave mistake to consider this auxiliary tool as anything else than an imaginary construction, and to overlook the fact that it has not only no counterpart in reality, but cannot even be thought through consistently to its ultimate logical consequences. The mathematical economist, blinded by the prepossession that economics must be constructed according to the pattern of Newtonian mechanics and is open to treatment by mathematical methods, misconstrues entirely the subject matter of his investigations. He no longer deals with human action but with a soulless mechanism mysteriously actuated by forces not open to further analysis. In the imaginary construction of the evenly rotating economy there is, of course, no room for the entrepreneurial function. Thus the mathematical economist eliminates the entrepreneur from his thought. He has no need for this mover and shaker whose never ceasing intervention prevents the imaginary system from reaching the state of perfect equilibrium and static conditions. He hates the entrepreneur as a disturbing element. The prices of the factors of production, as the mathematical economist sees it, are determined by the intersection of two curves, not by human action.

But Marxist economic theory has other strings to its bow. It has not just murdered tens of millions of people, bankrupted entire nations, and provoked international warfare. It has also provided employment for literally dozens of economists at British universities and newspapers.

Mario Draghi, the unelected Goldman Sachs alumnus now attempting to macro-manage the Eurozone economy via the European Central Bank, was engaged in a bitter-sounding spat with German politicians last week. Germany’s finance minister, Wolfgang Schäuble, had made the not unreasonable assertion that

“It is indisputable that the policy of low interest rates is causing extraordinary problems for the banks and the whole financial sector in Germany. That also applies for retirement provisions.”

“We have a mandate to pursue price stability for the whole of the Eurozone, not only for Germany. We obey the law, not the politicians, because we are independent, as stated by the law..”

It also became progressively political:
“With rare exceptions, monetary policy has been the only policy in the last four years to support growth.”

But neither Mario Draghi nor the European Central Bank has a mandate to support growth. That is not his job. David Stockman again:

But here’s the thing. The world’s greatest monetary charlatan is nearly out of tricks. He pointedly backed off from helicopter money today because the Germans have obviously drawn a line in the sand. And he can’t push NIRP much farther without breaking what remains of Europe’s sclerotic socialist banking system. And if he tries even more negative carry money under TLTRO it will assuage the margin pressure on European banks but not make the Eurozone’s debt besotted households and businesses a wit more credit-worthy or inclined to borrow.

Mario Draghi is not acting in isolation. The world’s major central banks are now acting entirely outside whatever spurious authority they believe they have amassed for themselves – undemocratically – since the Global Financial Crisis first ignited.

The mandate of the US Federal Reserve System, for example, is “to provide the nation with a safer, more flexible, and more stable monetary and financial system”. After over a century of Fed overseen credit cycles and banking crises, it is legitimate to ask: safer and more stable compared to what ?

As the American economist Thomas Sowell points out,

Socialism in general has a record of failure so blatant that only an intellectual could ignore or evade it.

Someone should tell Mario Draghi, perhaps.

The asset allocator is tasked with a similar problem. How can one sensibly invest when all prices have been distorted and no prices can be taken at face value (assuming they ever could) ? The answer, surely, is to focus solely on those areas of the global marketplace which have the characteristics of high quality, matched by the attributes associated with the possession of a ‘margin of safety’. Along with an association with high quality, ‘margin of safety’ in the financial markets of 2016 implies very specifically the absence of conspicuous overvaluation. Bonds no longer qualify in any real sense, but value equities still do. Happily, investible pockets of them still exist, despite the best efforts of the arch-exponents of mission creep to demolish the working economy.

Written By
Tim Price
More from Tim Price
“There is no simple, painless solution. The world has to reduce debt,...
Read More