When BofA’s Michael Hartnett releases his monthly Fund Managers’ Survey, the one chart we always focus on is the one showing what the “smart money” investors, aka those polled clients who make up the survey (and the same ones who we reported earlier have been selling this bear market rally for the eleven consecutive weeks) are most worried about, or as they put it: what are the biggest “tail risks.”

The first chart below shows that as recently as January, what kept everyone up at night by a substantial margin, with 45% putting it as their top fear, was a China Recession, followed by an EM debt crisis. 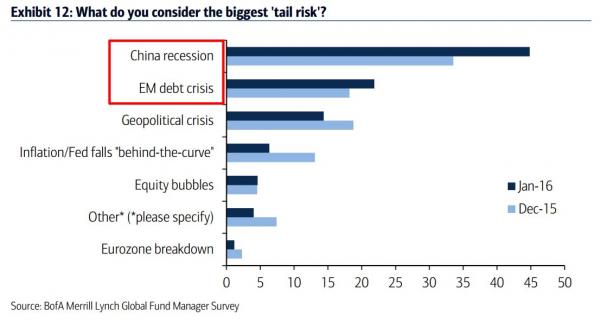 That changed dramatically just the next month, when the biggest fear in February had nothing to do with a Chinese recession or an EM Debt crisis, and everything to do with the dreaded “R” word right inside the gold ole’ US of A. In fact, four of last month’s top “tail risks” were brand news, and in addition to a US recession, these included energy debt defaults, quantitative failure and a topic we have been covering since mid-2015, China’s relentlessly encroaching capital controls. 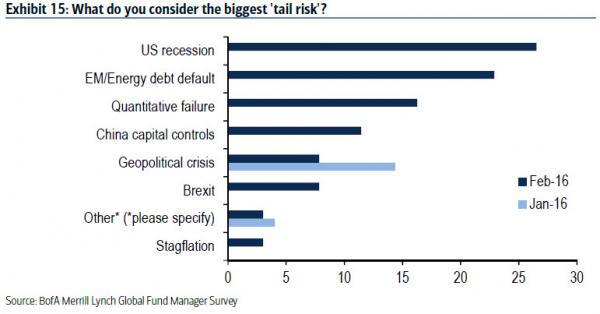 Then in March, concerns of a US recession receded dramatically, no doubt in response to the price action in the markets and instead all eyes were on the Fed, where “quantitative failure” was the top concern among 18% of those polled, just fractionally ahead of Recession with 18%, and China devaluation with 14%. While energy debt default has slid to fourth place with 14%, we are confident this will become a major topic again in the not too distant future (incidentally, a China recession was nowhere to be found at this time). 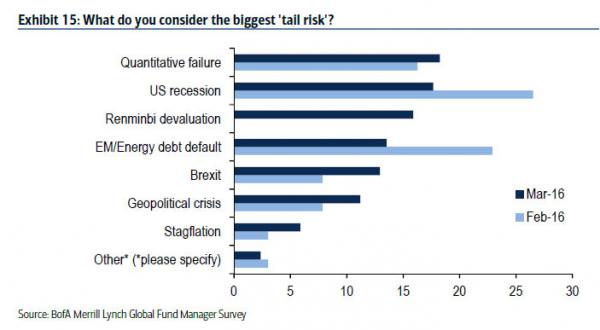 Finally, in April, the top “tail risk” remains the same: “Quantiative Failure” and for good reason – the only reason stocks are where they are is because of the Fed’s dramatic and dovish reversal in the aftermath of the Shanghai Accord, which in itself was a “failure” for the hawkish Fed unveiled last December when Yellen launched a rate hike cycle (which for now remains solidly in the one and done camp). It is understandable why market participants are worried: if the Fed errs not only on the hawkish side but on the dovish one as well, all bets are off.

What is curious is the sudden jump in worries about Brexit: after first appearing in February at the tail end of the list of concerns, and then rising in March, the concern that the UK may leave the Eurozone is now the second biggest fear, surpassing US recession which is now in theird place. Rounding out the rest of the top fears are old favorites such as Renminbi devaluation, Energy debt defaults, Geopolitical Crisis, and another relative newcomer: Stagflation. Keep a close eye on this one – now that gasoline prices are suddenly spiking and core inflation has spiked (without a commesurate increase in wages) this will be a topic that becomes far more popular in the coming weeks. 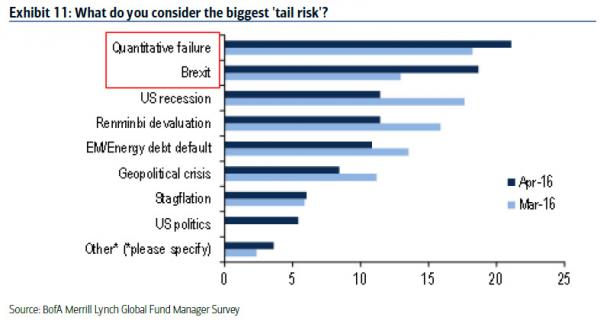 In October 2010, I wrote in the Amphora Report titled Guess What’s Coming to Dinner: Inflation! that sharply higher agricultural commodity prices were going…