In the 1970s economists started to incorporate rational expectations into their models and not long after the seminal Kydand & Prescott (1977) article named Rules Rather than Discretion: The Inconsistency of Optimal Plan was published. Their work has been driving the mainstream macroeconomic debate ever since. The question raised in this debate is how policy-makers can credible commit to promises made today when future events may cause short-term pain if restricted by stringent rules from taking action?

For example, in the Treaty on the Functioning of the European Union Article 125 it clearly states that “the Union [or any Member States] shall not be liable for or assume the commitments of central governments, regional, local or other public authorities…” it also says in Article 123 that“[o]verdraft facilities or any other type of credit facility with the European Central Bank or with the central banks of the Member States… …in favour of Union institutions… …shall be prohibited, as shall the purchase directly from them by the European Central Bank or national central banks of debt instruments.” Both rules are there to credibly commit to not bail out EU nations either through ECB inflation or with other member states tax euros. Needless to say, after SMP, OMT, ELA, EFSF, ESM, maturity extensions and interest rates reductions these rules turned out to be useless. Rational actors obviously adapt their behaviour accordingly as the European Union turns into tragedy of the commons where moral hazard abounds. Actually, the whole monetary union has been a monetary tragedy of commons since its inception as credit expansion in one country did not have any of the adverse effects associated with either falling exchange rates or gold outflows. The euro area essentially incentivises maximized inflation with no natural correcting mechanisms apart from gargantuan capital consumption that goes along with it.

Such adverse outcomes have naturally led economists to revisit the “Rules vs. Discretion” debate in terms of monetary policy. The Fed Oversight Reform and Modernization Act (H.R. 3189 passed House November 19 2015) explicitly states a rule on how the Federal Reserve should conduct its monetary policy. According to H.R. 3189 the Federal Funds rate shall be calculated as sum of the following a) the rate of inflation over the previous four quarters, b) one half of the percentage deviation of the real GDP from an estimate of potential GDP, c) one half the difference between the rate of inflation over the previous four quarters and two percent and d) two percent. For those of you privy to economic history, you see that this is the original Taylor rule as proposed by John Taylor in 1993.

In the chart below we have calculated this rule and compared it to the actual federal funds rate. Historically they have tracked each other relatively well as witnessed by the narrow red and blue areas. This was also a time when the US economy was thriving, so people naturally look at the two time series and concludes that the only way to get back to uninterrupted prosperity is for monetary policy to return to its old ways. From about 2000 we see two large and persistent red areas suggesting monetary policy was too accommodative relative to underlying fundamentals. The first large red area created the biggest bubble the world has ever witnessed. In response to that calamity, the Federal Reserve created an even larger and more protracted red area as represented by the second difference to the Taylor rule implied funds rate. What kind of bubbles and misallocations this policy experiment created only time will tell. Adding forward guidance, QE and MEP to the equation, the federal funds rate has probably been even lower as shown with the so-called shadow rate in the chart.

This obviously does not sit well with our money masters in the Eccles Building as it put the blame squarely on them for creating the deepest recession since the 1930; so they come up with their own versions of the Taylor rule. We calculated also their version of the rule (green line) with emphasis conveniently focused more on the so-called output gap. However, even with this rule today’s funds rate should be more than three per cent. To rectify such blasphemy, former chairman Bernanke made his own calculation, and unsurprisingly, this particular estimate follow the actual rate perfectly. 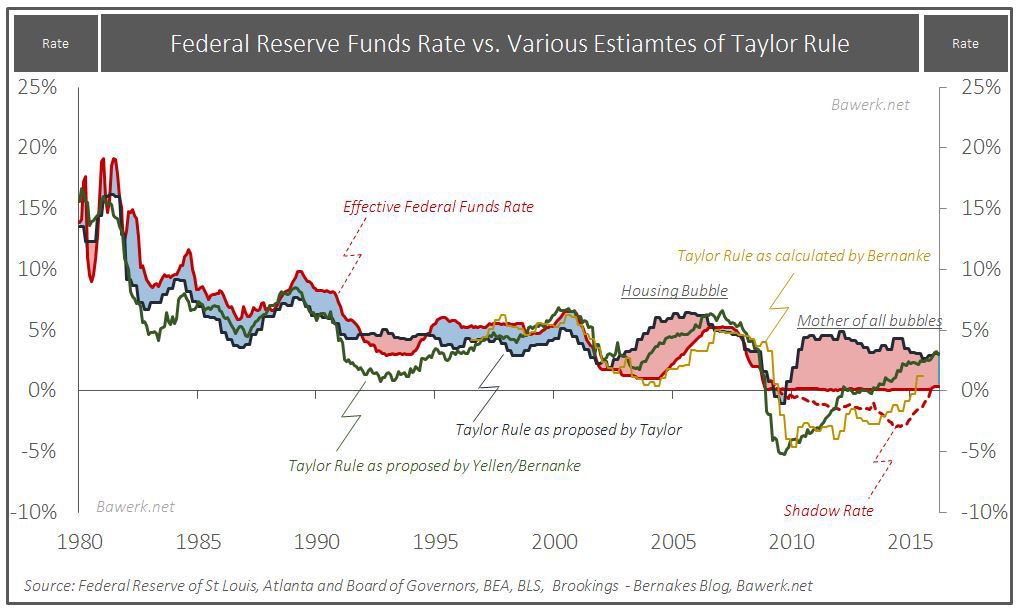 In our view it is beyond doubt that the FOMC is the main culprit for today’s over-leveraged, unstable low growth environment, but it is still interesting to note how even rules can provide such dramatically different conclusions. It does not give much credence to the whole rule vs. discretion debate when the rules themselves are discretionary applied.

The point being missed completely by both sides of the debate is that economics is not a natural science, but a social one. It is impossible to construct scientifically valid rules to an ever changing social system. The optimal rule in 1993 is not optimal in 2001 nor in 2008.

Let’s look at one of the key input variables in Taylor rule calculations; namely the potential GDP used to estimate the output gap.  This is instrumental for policy-makers when they set their rate of interest, either rules based or discretionary determined.  While the layman may feel inundated by concepts like potential GDP they are immensely simple trend calculations. In less than five minutes we created a potential GDP series just as good as any by regressing real GDP versus time and extrapolating from that.  Believe it or not, but this is what drives monetary policy actions directly affecting billions of people and trillions of transactions every day. From the distance between the trend calculation and actual measured GDP (which is both a poor metric for a nations well-being and subject to large revisions) policy-makers fix the most important price in the whole economic system; the intertemporal coordinating mechanism between saving and investment. These are highly educated people who would balk at the very idea of fixing prices for, say, gasoline, but have no qualms with fixing the rate of interest. It is also interesting to see howpotential GDP falls as actual GDP falls. Excel will give you a circular reference error if attempting the same trick, but such inconsistencies does not seem to bother our central planners. 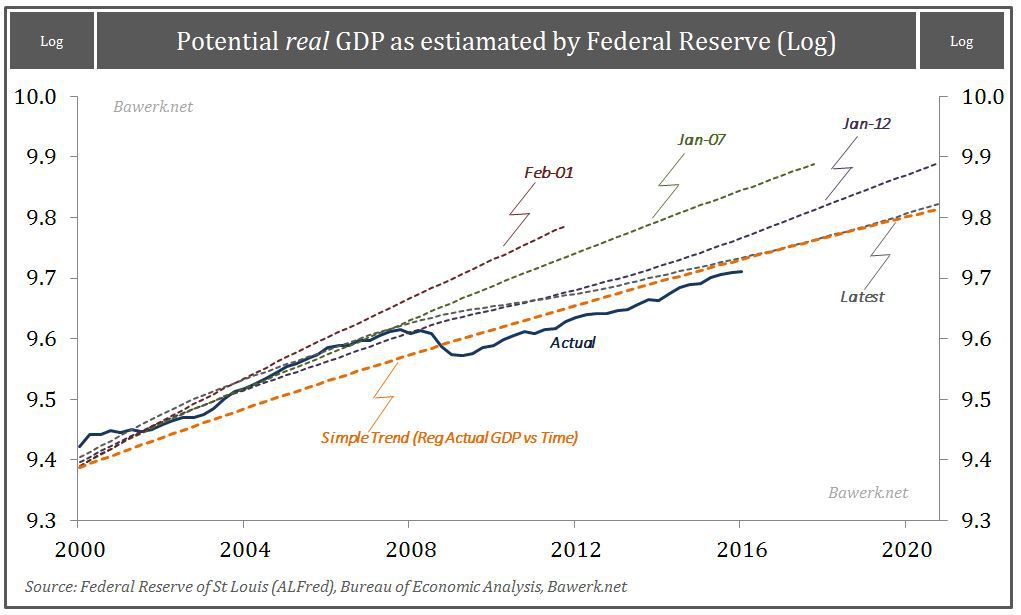 Monetary policy may seem technical as clever people debate among themselves whether the optimal policy rule should be one part inflation and one part output gap or one part inflation and two part output gap with various degree of flexibility in its interpretation. In reality it is just a bunch of academics looking at an extremely simplified mathematical representation of the world under the pretense of knowing the consequences of their actions. They do not. It is all made up as they go along and the repercussion for their hubris will be borne by all of us. It is glaringly obvious to us that the extraordinary decisions made by our money masters over the last decade will end in an extraordinary correction of malinvested capital. Applying the scientific method of natural science on a social system is the gravest error of them all.

Written By
Other Writer
More from Other Writer
In May, Japanese Finance Minister Taro Aso and colleagues warned of their...
Read More