The Federal Reserve really wants to raise rates, but they do not dare as the consequence of interrupting an unprecedented level of capital misallocation is too grave to face head on. So our money masters continue their low interest rate policy; pulling society further and further into a capital structure that cannot be sustained long term. In other words, scare capital is consumed in order to feed the present structure of production. Low rates thus cement what cannot be upheld and the suppression of volatility entailed by such policies simply mean internal inconsistencies accumulate without any functioning correction mechanism. Think of it as two continental plates pushing against each other; it is obviously better with thousands unremarkable earthquakes spread over time than a sudden burst of centuries with built up tension. Soviet Union did not have any functioning price system and they manage to run their economy for decades without recessions, until 1989 that is…

Our economic system should optimally experience a recession daily so unremarkable that no one even notice as these tiny corrections will help keep the system sustainable and balanced. Weeding out imbalances before they can do harm. World central bankers on the other hand suppress these corrections and consequently create conditions for massive disruptions. Controlling short term volatility inevitably leads financial dislocations large enough to bring down the whole system.

Today we will show how this may manifest itself for the US federal government as the Federal Reserve is eventually forced to raise rates, possible faster than anyone today imagine possible. In one scenario it is entirely possible that central bank credibility falls among the general public, leading to lower demand for cash and inversely increases demand for goods. In this particular scenario, prices, measured in currency units, spirals out of control and the only thing the central bank can do at this stage is to create the gut wrenching recession needed to tame price inflation. Volcker was forced to do it in the early 1980s from a far better starting point than todays.  The latest consumer price inflation report issued by the Bureau of Labor Statistics does indeed show some price pressure in the dollar system with the “core” rate running ahead of target for the fifth month in a row as of April. 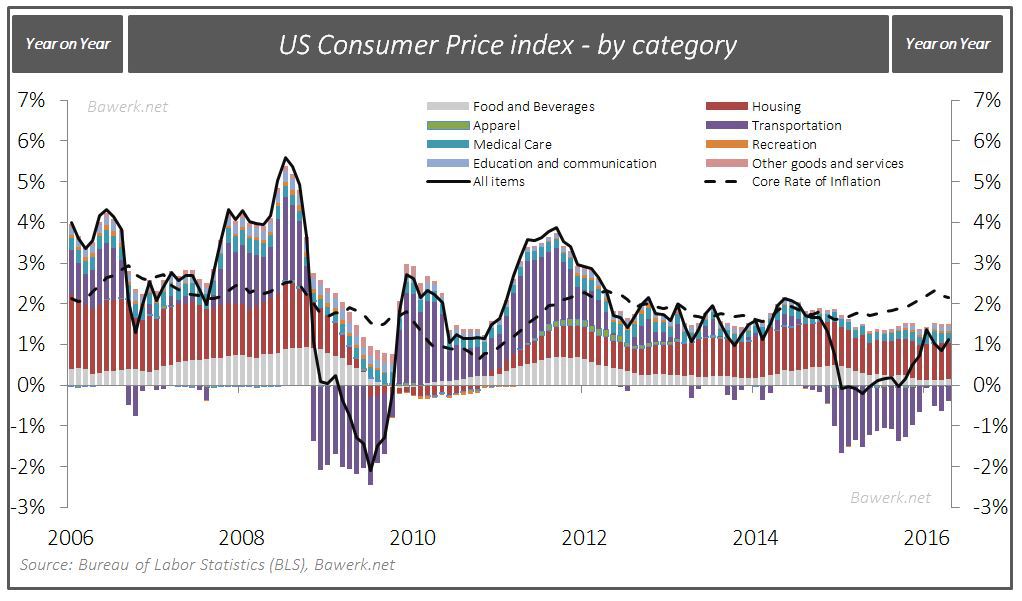 For now, assume the FOMC will follow its latest dot-plot, lifting rates to 0.875 per cent by year-end 2016, 1.875 by December 2017, 3.00 in 2018 and 3.25 from there on. Further assume a stable yield curve with longer dated rates following the Fed funds rate smoothly upwards. Needless to say, if the FOMC does lift rates it is highly likely the yield curve will invert as the US economy, on the brink of recession, cannot cope with higher interest rates. However, for the sake of argument assume the future will look like the chart below 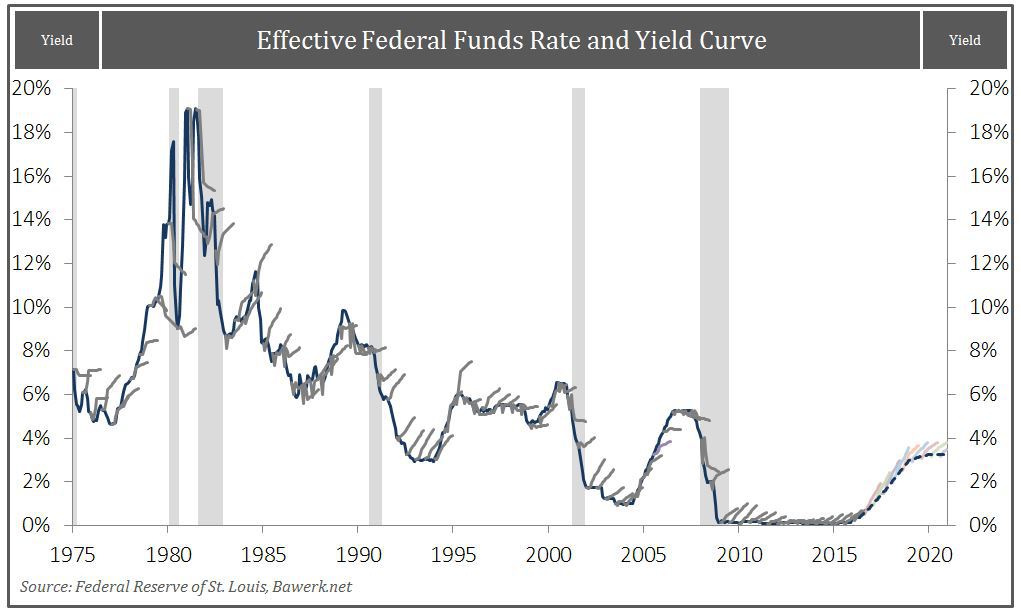 The Fed Funds rate is at 3.25 per cent by 2019 while the 10-year is assumed to be a mere 3.8 per cent. In this scenario everything is going according to our money masters plan. Inflation remains low and the US economy grows around 1.5 – 2.0 per cent in real terms and nominal GDP starts out by growing at just over 3 per cent and subsequently falling gently to a rate of 2.3 per cent by 2020. Marketable debt increases slightly faster than historical norms (last 15 years) due to population ageing.

Note that we disregard intergovernmental debt as interest paid on these will only be shifted among departments. However, when looking at debt to GDP they need to be included since principal down payment will necessarily come out from the same tax base as all other government expenditures. 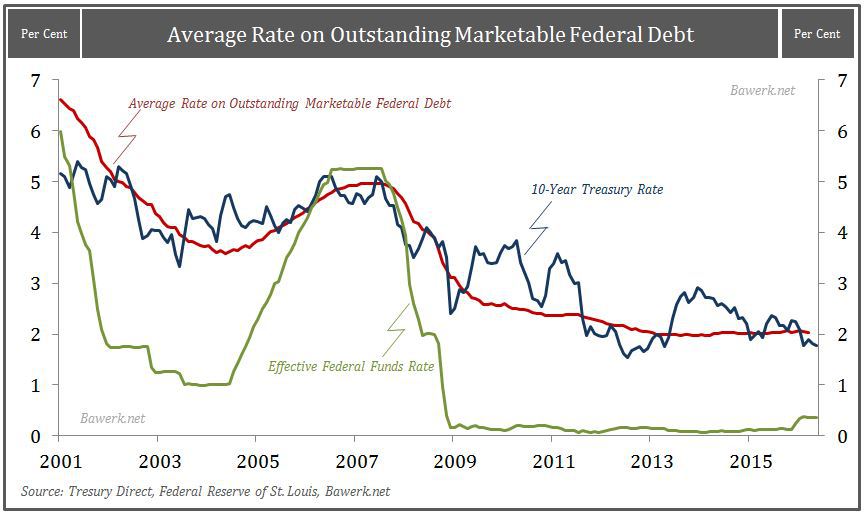 As the central bank not only suppressed the short end, but also the entire yield curve by incentivizing private investors to change their focus in a so-called portfolio rebalancing channel and outright purchases of notes and bonds, the US Treasury was prudent enough to increase its maturity profile to reduce roll-over risk and lock-in low rates today. 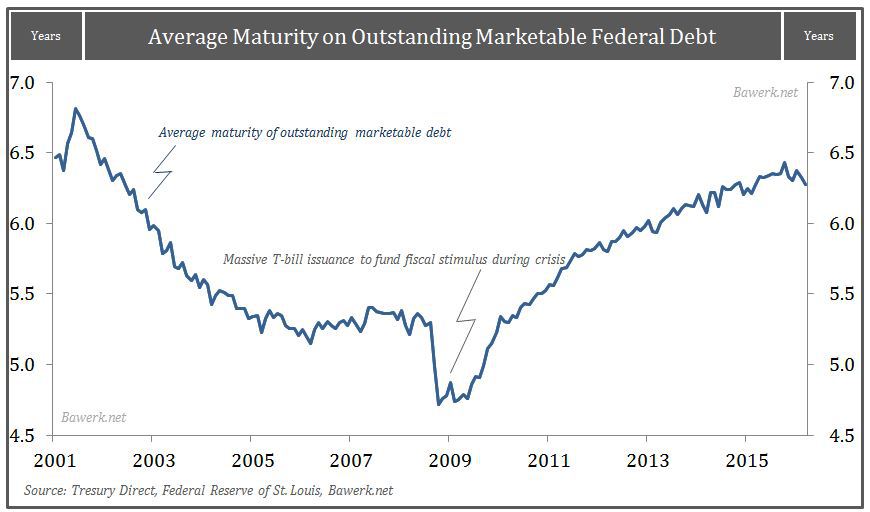 Despite the relatively long maturity profile, higher interest rates will quickly lead to higher debt servicing cost due to the sheer size of the USD13.4 trillion worth of outstanding marketable debt. By 2020 this level could easily reach more than USD20 trillion. We actually think it conservative to assume the Federal Government will be paying more than USD800 billion in 2020 just to service outstanding marketable debt! 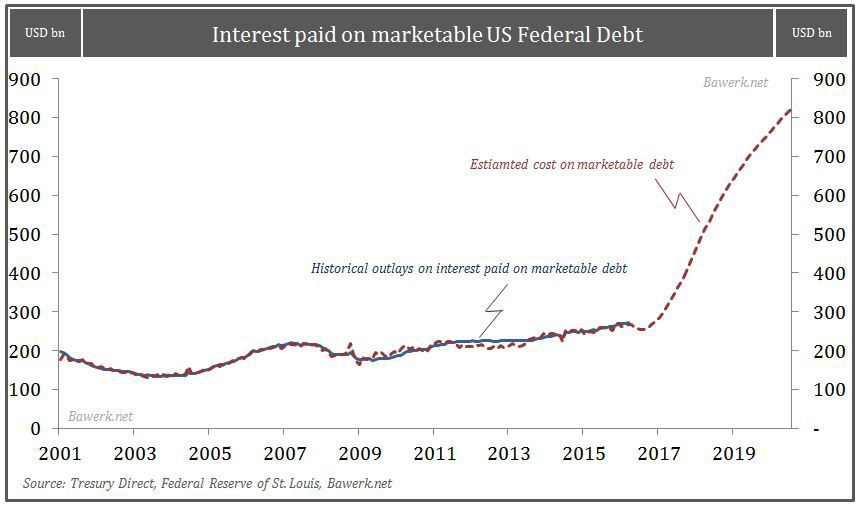 While inflation will help nominal GDP grow along with the debt, the Federal Government will still be paying a similar share of its nominal GDP in 2020 as the Greeks and Italians pay to service all their debt today.  At this point, it is worth noting how interest rates and hence interest payments suddenly becomes non-linear at crucial inflection points where investor confidence is lost. When the euro crisis first erupted this is exactly what happened to troubled nations. Confidence is easily lost among investors when a nation is on an unsustainable trajectory. 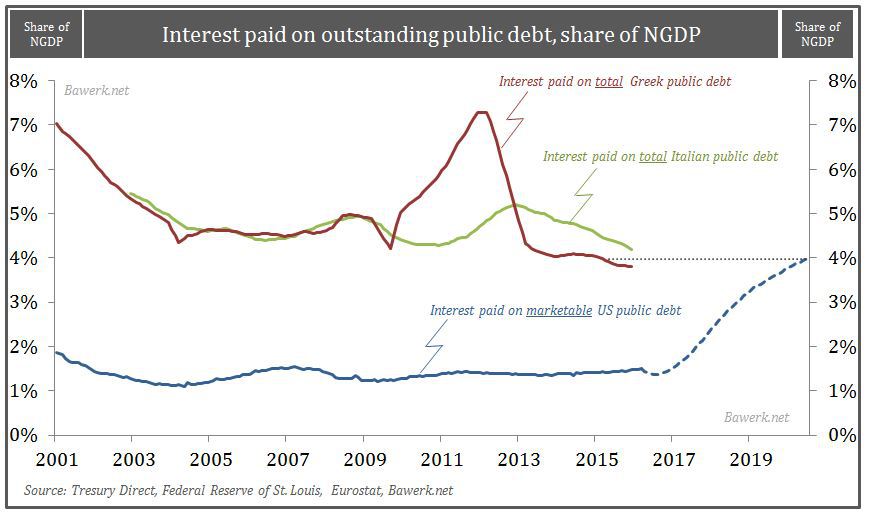 As an FYI, the Italians are paying a fraction of what they would in a free market due to ECB rate suppression. If the Italians were paying according to the average pre-crisis rate on public debt they would have to cough up almost 6.5 per cent of nominal GDP just to service their debt by now. 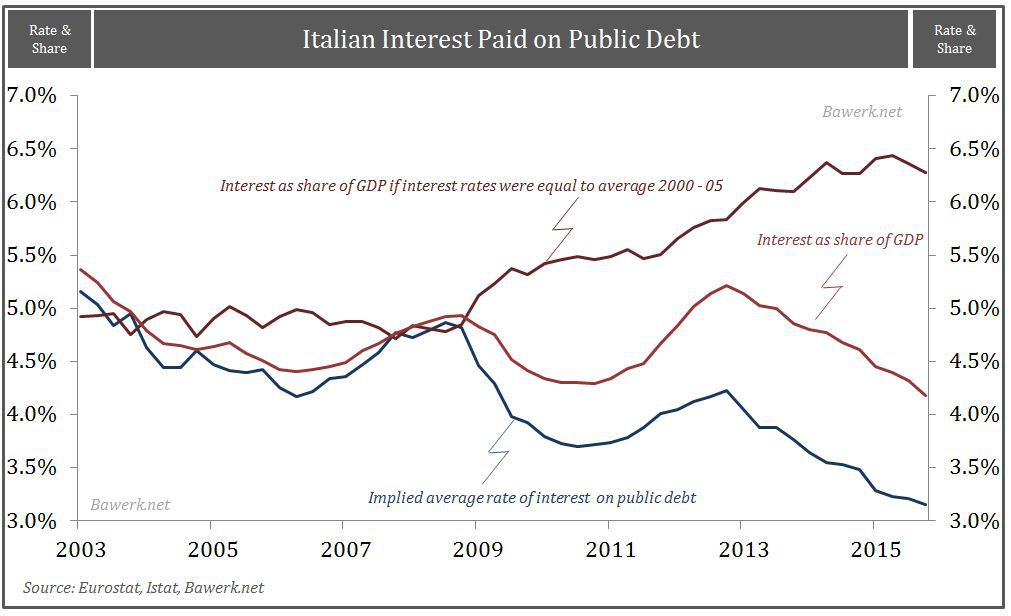 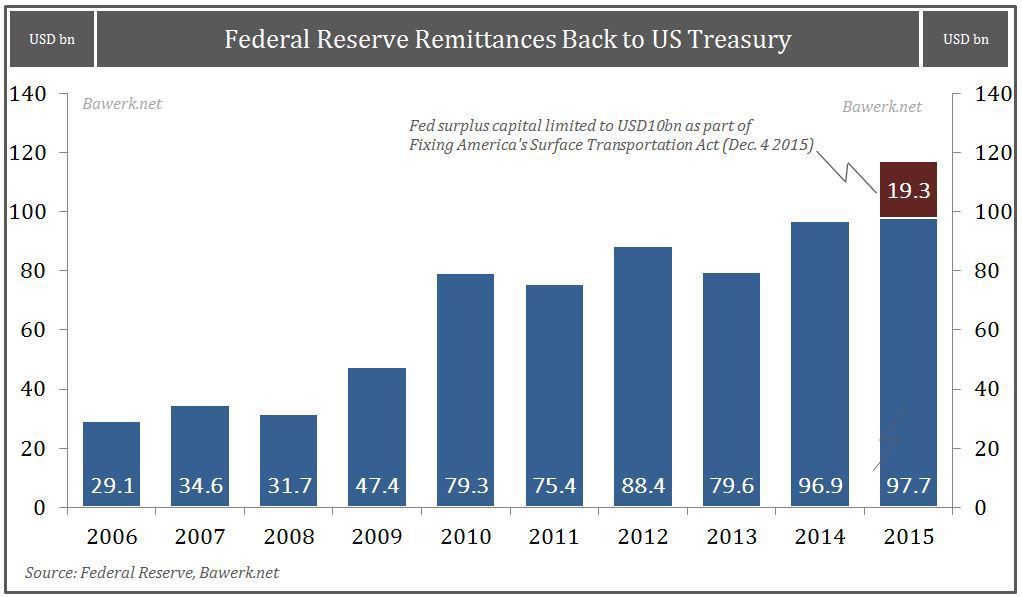 However, as the most overleveraged financial institution in the world are forced to mark-to-market their massive losses on bonds as rates are moving higher, the Federal Reserve must maintain earnings in order to recapitalize itself. In other words, the transition from one interest regime to another makes Fed holdings of US treasuries very real indeed. Fed remittances will no longer be available to the US Treasury. 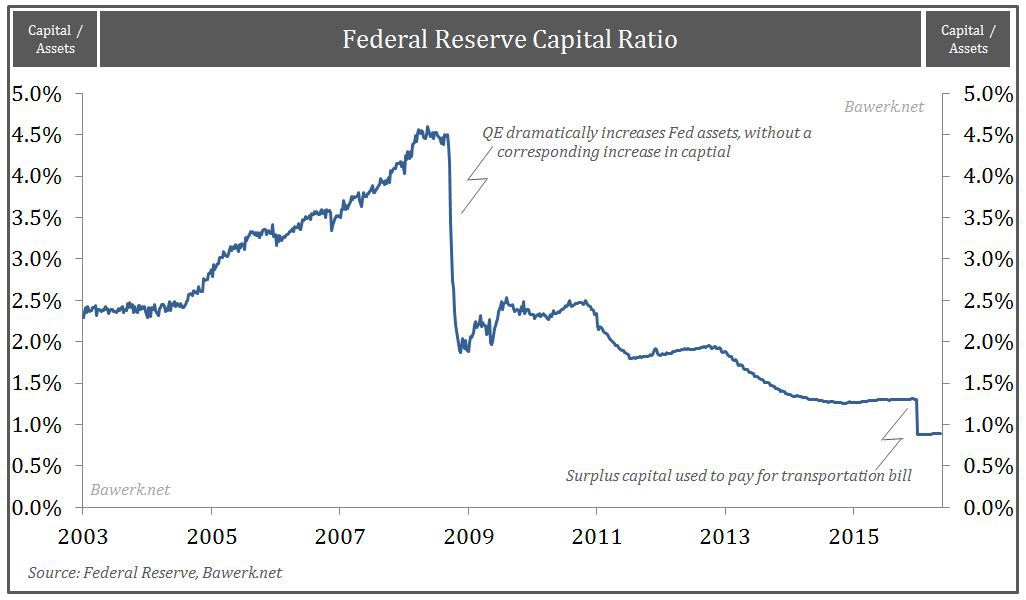 In conclusion the Federal Reserve has created a semblance of normality, but by suppressing interest rates they have enabled non-linear, and very possible ugly outcomes, to become entrenched in US public debt dynamics. The euro crisis from 2010 to this day show how difficult it can be to regain investor trust when the unsustainability is first revealed for all to see.

Written By
Other Writer
More from Other Writer
by Benn Steil and Benjamin Della Rocca at CFR https://www.cfr.org/blog/fed-tightening-more-it-realizes Before the 2008 collapse of Lehman Brothers,...
Read More