It took a while to play through, but our assessment that China would increasingly become the petro-state lender of last resort is starting to come good. The primary reason for that is producer states are rapidly running out of time to present full scale political implosion on the back of chronic economic pressures. For all the hype around current ‘price recovery’, it means absolutely nothing for most producer states. It’s becoming painfully obvious that the prevailing geopolitical price of survival is structurally out of sync with geological costs of production. Ten dollars here, ten dollar there; it doesn’t really matter: Either China ‘steps up or steps out’ as the lender of last resort to keep fragile petro-states in the black at this stage. You’d think that’s a relatively easy call to make, but it’s anything but for Beijing. Prop up one petro-state, and the same standard will be applied across the board. Let one fail, and political contagion risks become very real across China’s entire supply base. That defines the very core of the lender of last resort conundrum for China. Where does Beijing want to draw its petro-state lines?

The most obvious (and extreme) test case is of course Venezuela. Beyond PSUV politicking around President Maduro, referendum recalls and whether the party can stagger on to 2019 without having to hold a national ballot, the country is economically collapsing. Nobody can get access to basic goods, kidnapping rates are through the roof, both of which happen to be directly linked to the government’s clear aim to cut imports as far as possible (towards $20bn this year) to try and service external debts. Beyond government control of food lines via ‘local supply and production committees’ with some pretty blunt tactics from the National Guard and police to contain massive social unrest, it’s still nowhere near enough to prevent outright default without Chinese help. Little wonder Venezuela is begging Beijing for another $8bn credit line, with postponed payments on PDVA’s oil backed debts to for at least a year, where China would basically provide ‘more cash’ and take less equity crude to buy Venezuela more 2016-17 time. 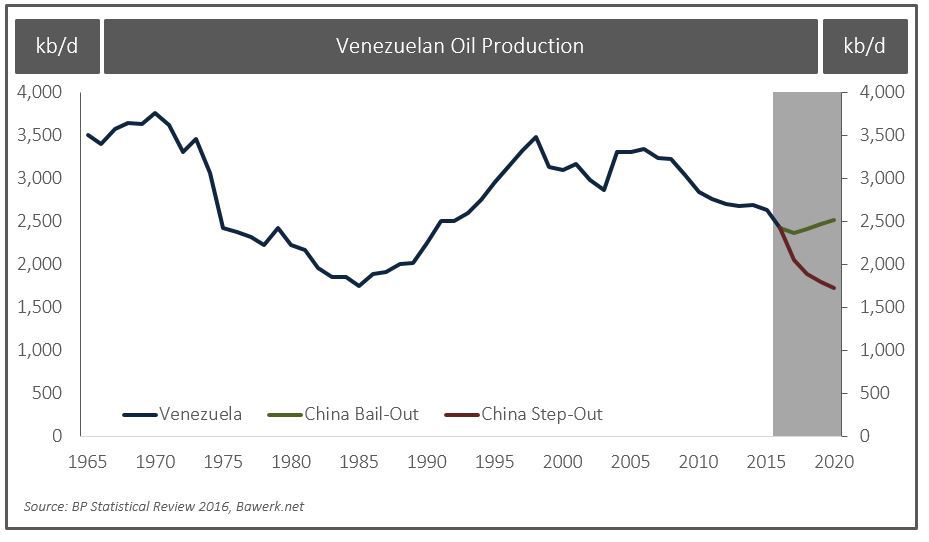 Whether China goes for it remains to be seen, but it’s in little doubt if it decides to keep Maduro on life support, it’s then going to be cutting far more cheques to buy President dos Santos another election in Angola (August 2016). That would entail exactly the same ‘more cash vs. less equity crude’ mantra from Luanda, with Southern Iraq using the the same copy / paste story in Rumaila. Obviously you could add Ecuador, South Sudan and even Caspian players into the mix, but wherever you look, China has the same fundamental call to make: How many petro-players does it want to keep on its books, and at what strategic price, given that all means easing up on equity barrels as the mainstay of Chinese supply side optionality. Let’s not forget, petro-states are the absolute definition of ‘moral hazard’ when it comes to side stepping fiscal realities for as long as politically possible, at least if someone else is willing to pay for it.

Unsurprisingly our readers won’t be amazed to hear that we don’t see this as a one size fits all conundrum for China’s response, but rather a three tiered attack. Step one will be making a clear example out of some of Beijing’s smaller supply side interests to let them collapse. That’s not because China wants to establish any kind of precedent to that effect, but because they’ll want larger players such as Venezuela and Angola to understand that any interim loosening of terms is still categorically playing by Chinese rules and Chinese interests. In effect, that’s step two. ‘Cheap’ Chinese money will become extremely politically expensive for any petro-states deemed worthy of keeping alive. As the third, and final step in that process, also expect China to become much smarter at covering its political bases across producer states to protect longer term sunk costs. In Venezuela, that means owning the PSUV, the opposition MUD, and most of all, the military. In Angola, it means stitching up the dos Santos clan, but also reaching deeper in MPLA cadre to see what comes out of the succession wash. In Iraq, it means much closer engagement with Southern Shia militias to protect assets, in addition to far broader Baghdad / Abadi based politicking. When the time comes, rest assured that’s also going to mean much closer links with the Revolutionary Guards in Iran as long term political cover. Sure, China has a serious conundrum as lender of last resort, but it’s one they’ll put a radically new spin on things compared to old IMF edicts. This time, it will be genuinely politically painful….

With a hat tip to Associative Economist, Arthur Edwards, we reproduce below an excerpt from Riegel’s book The new approach to freedom. The Right-Wing…