“The state is that great fiction by which everyone tries to live at the expense of everyone else.”

“When goods do not cross borders, soldiers will.”

The Brexit vote presents an opportunity for renewal, revolt or relapse. Reform could unlock productivity and reduce inequality. A new government with a strong majority and a liberal agenda could transform the UK. Let us not waste this golden opportunity for transformation.

The first French use of the term “Perfidious Albion” dates from the 13th century; that we voted to leave the EU seems almost natural in this, historical, context. It was, nonetheless, a shock and one which the Brussels elite are unlikely to forget: hopefully they may learn to forgive. Now that the die is cast and the UK has crossed the Rubicon, rather than regret, we should look ahead to navigate the fen of stagnant waters and, as Wordsworth in his poem London 1802, implores the ghost of Milton:-

We are selfish men;

Oh! raise us up, return to us again;

And give us manners, virtue, freedom, power.

Change is seldom without its challenges but we have a once in a lifetime opportunity to engender prosperity, increase productivity and reduce inequality, if we embrace the liberal virtues of self-reliance and smaller government. In this essay I suggest just some of the ways in which we can transform the fortunes of the UK economically, culturally and spiritually. But first I want to look back to the referendum of 2014.

In the aftermath of the first Scottish referendum in September 2014 – on whether to remain part of the Union –  John Butler wrote a brilliant article for the Cobden Centre – From Bravery to Prosperity: A Six-year plan to make Scotland the wealthiest Anglosphere region of all encouraging the Scots to remember the great tradition of the 18thcentury Scottish Enlightenment. In it he made a number of recommendations which I have paraphrased below:-

Parsimony: without savings there is no capital for investment. Debt is deferred saving and is a drag on future growth.

Develop Human Capital: investment in education and training for growth industries such as healthcare and technology.

Sound Banking: Scotland should forbid any bank from conducting business if they receive financial assistance from the Bank of England or UK government.

Self-Reliance: decentralisation of government to local and regional bodies which are more answerable to their electorate.

Presbyterianism: the heady combination of faith, hard work and thrift based on a moral and legal code of anti-corruption.

Last month, the, still, United Kingdom voted to leave the EU. Many, especially the young, have been shocked and dismayed by the decision and it is likely that the Scots, who voted in favour of remaining, will have another referendum about whether to remain in the Union or replace the UK as the 28th member of the EU.

Many uncertainties exist and the transition from EU membership to a new independent relationship with Europe will take several years to forge, however, rather like the opportunities available to Scotland, in the devolving of power from Westminster, so the UK, as it leaves the EU, can seize this chance to renew itself economically, culturally and spiritually.

For the next five years any “bad news” can be blamed on Brexit. During this period we must become self-reliant. Given the demographic challenges facing this sceptre isle we need to consider the steps required to put our finances on a sustainable footing. The age of retirement needs to be raised more rapidly – when the Old Age Pension Act passed in 1908, life expectancy was 51.3 years for men and 55.1 years for women; in 2015 the ONS reported this had risen to 86 and 89 years respectively. Education and training, also, needs to be delivered in a more cost effective manner. Technology, which will directly increase productivity, is well placed to take the strain but investment has been inadequate.

By reducing government debt and scaling back government borrowing we can release capital to be invested in the private sector. Many aspects of government could be privatised: resources are better allocated when price, rather than government edict, acts as the signal. A maximum size of government spending relative the GDP should be introduced in order the redress the egregious excesses of the last 43 years. The chart below shows the evolution over the period:-

This second chart shows the steady rise since 1900 excepting the sharp increases during the two world wars:- 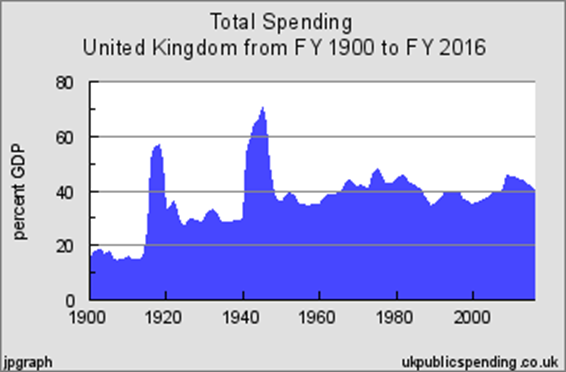 This 2005 article from the Heritage Foundation – The Impact of Government Spending on Economic Growth discusses the diminishing returns of government largesse once spending exceeds 15% of GDP. If we could but rein spending back to 25% of GPD it would be so much more beneficial in the long run – I fear, however, that the social backlash would be profound. The chart below of the Rahn Curve offers a vivid illustration:- 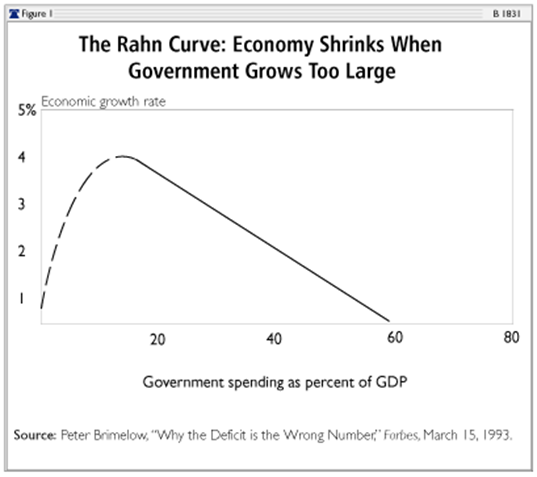 From perfidy to panacea

Here is an outline plan to transform the UK into a dynamic, growing economy in the years ahead, it focusses on a handful of areas, many more reforms could be undertaken:-

Tax Reform: A flat-tax system with no loop holes, paid by individuals rather than corporations. Companies are owned by individuals who pay tax on dividends and capital gains on disposal – it is economically wasteful to tax the owners twice and creates an arbitrage whereby debt becomes a more attractive means of raising capital than equity.

Planning Reform: The UK is one of the most densely populated developed countries in the world. We need more housing both for social and economic reasons. The current regime, where permanently restricted supply creates price inflation, skews the allocation of capital throughout the UK towards rentier projects. With a population of 64mln, only 143,000 houses were built in the UK last year. Policies similar to those of Germany – population 80mln, new houses 270,000 – would transform the allocation of investment. The chart below shows the evolution of the two house price indices over the last 10 years – note the difference between the right hand and left hand scale:-

Banking Reform: The financialisation of the UK economy has reached a point where productive, long term capital investment is in structural decline. Increasing bank capital requirements by 1% per annum and abolishing a zero weighting for government securities would go a long way to reversing this pernicious trend.

Monetary Reform: The key to long term prosperity is productivity growth. The key to productivity growth is investment in the processes of production. Interest rates (the price of money) in a free market, act as the investment signal. Free banking (a banking system without a lender of last resort) is a concept which all developed countries have rejected. Whilst the adoptions of Free banking is, perhaps, too extreme for credible consideration in the aftermath of Brexit, a move towards the free-market setting of interest rates is desirable to attempt to avert any further malinvestment of capital.

Labour Market Reform: A repeal of the Working Time Directive and the Agency Workers Directive would be a good start but we must resist the temptation to close our borders to immigration. Immigrants, both regional and international, have been essential to the economic prosperity of Britain for centuries. There will always be individual winners and losers from this process, therefore, the strain on public services should be addressed by introducing a contribution-based welfare system that ensures welfare for all – migrants and non-migrants – contingent upon a record of work.

Educational Reform: investment in technology to deliver education more efficiently would yield the greatest productivity gains but a reform of the incentives based on individual choice would also help to improve the quality of provision.

Free Trade Reform: David Ricardo defined the economic law of comparative advantage. In the aftermath of the UK exit from the EU it would be easy for the UK to slide towards introspection, especially if our European trading partners close ranks. We should resist this temptation if at all possible; it will undermine the long term productivity of the economy. We should promote global free trade unilaterally through our membership of the World Trade Organisation. In the last 43 years we have lost the art of negotiating trade deals for ourselves. It will take time to reacquire these skills but gradual withdrawal from the EU by way of the EEA/EFTA option would give the UK time to adjust. The EEA might even prove an acceptable longer term solution. I suspect the countries of EFTA will be keen to collaborate with us.

I realise that many of these reforms are likely to meet with profound antipathy from vested interest groups and conservatives. There are also many risks associated with the implementation of these reforms and significant uncertainty, surrounding their fiscal impact, during the transition from the existing to the new regime. I believe, however, that many of these proposals are tenable because they can be introduced gradually. We have a golden opportunity, which I hope we do not squander, to transform the UK from pariah to paragon.