A fall in the US velocity of money M2 to 1.44 in June from 1.51 in June last year and 2.2 in May 1997 has alarmed many experts. Note that the June figure is the lowest since January 1959 (see chart). Some commentators are of the view that this points to a severe liquidity crunch, which could culminate in a massive stock market collapse and an economic disaster in the months ahead. 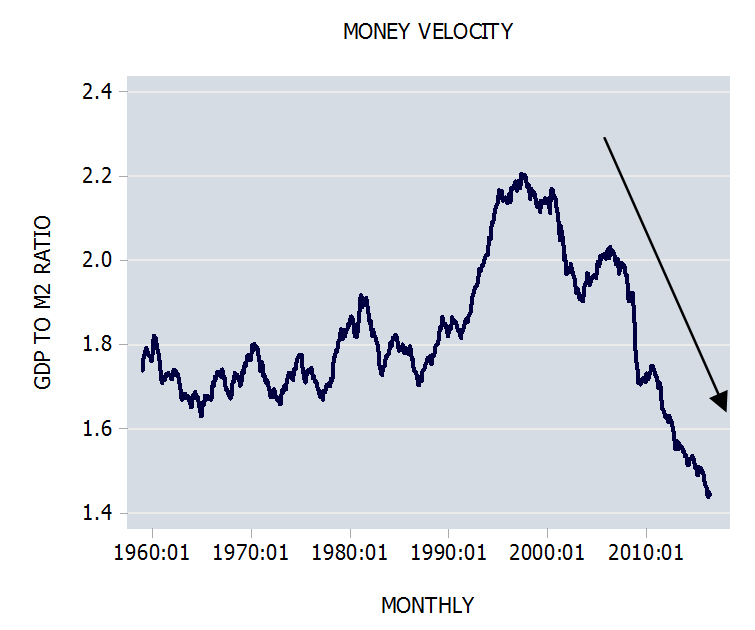 The $500 billion of money is boosted by means of a velocity factor to become effectively $3000 billion. This implies that the velocity of money can boost the means of finance.  From this it is established that

This expression can be summarized as

Where V stands for velocity, P stands for average prices, T stands for volume of transactions and M stands for the supply of money. This expression can be further rearranged by multiplying both sides of the equation by M. This in turn will give the famous equation of exchange

This equation states that money times velocity equals value of transactions. Many economists employ GDP instead of P*T thereby concluding that

The equation of exchange appears to offer a wealth of information regarding the state of the economy. For instance, if one were to assume a stable velocity, then for a given stock of money one can establish the value of GDP. Furthermore, information regarding the average price or the price level allows economists to establish the state of real output and its rate of growth.

Does the concept of velocity of money make sense?

From the equation of exchange it seems that money together with velocity is the source of funding for economic activities. Furthermore, from the equation of exchange it would appear that for a given stock of money an increase in velocity helps finance a greater value of transactions than money could have done by itself – obviously then that the decline in velocity should be seen as a great concern.

As logical as it sounds, neither money nor velocity have anything to do with financing transactions. Here is why.

Consider the following: a baker John sold 10 loaves of bread to a tomato farmer George for $10. Now, John exchanges the $10 to buy 5kg of potatoes from Bob the potato farmer. How did John pay for potatoes? He paid with the bread he produced. Observe that John the baker had financed the purchase of potatoes not with money but with bread. He paid for potatoes with his bread using money to facilitate the exchange. In other words money fulfils here the role of the medium of exchange and not the means of payment. The number of times money changed hands has no relevance whatsoever on the bakers’ capability to fund the purchase of potatoes. What matters here is that he possesses bread that can be exchanged by means of money for potatoes.

How is it that the fact that the same $10 bill used in several transactions can add anything to the means of funding? Imagine that money and velocity would have indeed been means of funding or means of payments. If this was so then poverty world-wide could have been erased a long time ago. Moreover, since rising velocity is supposed to boost effective funding then it would have been to everyone’s benefit to make sure that money circulates as fast as possible. This implies that any one who holds on to money should be classified as menace to society for he slows down the velocity of money and hence the creation of real wealth.

Velocity does not have an independent existence

Contrary to popular thinking velocity has not got a “life of its own”. It is not an independent entity – it is always value of transactions P*T divided into money M ie P*T/M. On this Rothbard wrote (Man Economy and State p 735)

But it is absurd to dignify any quantity with a place in an equation unless it can be defined independently of the other terms in the equation.

M*(P*T)/M = P*T, which is reduced to P*T = P*T, and this is not a very interesting truism. It is like stating that $10=$10 and this tautology conveys no new knowledge of economic facts. Contrary to popular thinking the velocity of money doesn’t have a life of its own. It is not an independent entity and hence it can’t cause anything. We can then conclude that the fact that the so called velocity of money fell to the lowest level since 1959 doesn’t by itself suggest that the stock market and the economy are poised for massive collapses in the months ahead.

3 replies on “Should we be concerned with the fall of money velocity?”