Laws of politics have been turned upside down. The Intellectuals Yet Idiots can make no sense of it. The underdog who ‘tell it how it is’ appeal to people while established reasoning does not.  Politicians used to pit people against each other and bribe key electoral groupings with the spoils of ‘democratic’ victory to maintain power; well aware that the “…[process] will [only] endure until the day [politicians] discovers that it can bribe the public with the public’s money.” From that day onwards, western democracies have been on a slippery slope as the state consumes and redistributes ever more of society’s productive capital. When taxes became exploitative, the state went into debt. When workers’ real wages stagnated, the central bank subsidized further indebtness. Generations of capital accumulation prior allowed this monstrosity to continue for decades; blurring cause and effect. When the debt machine stalled in 2008, people started to feelsomething was seriously wrong with the system. Political hacks with their old tricks could no longer bribe and lie because people started blaming them for the hardship. However, years of indoctrination under the auspice of political correctness left the constituency unable to express their feelings. Self-declared besserwissers with fancy Ph.D. degrees would aggressively strike down on any genuine expressed feeling of unease by branding them as unschooled racists, bigots or simple-minded children. Debt slaves had to accept their lot in society as there were no outlet for them to vent their increasing frustration. With hindsight, it is obvious that this political and financial pressure cooker would explode, and that is exactly what we are living through right now. We are definitely on the cusp of a major break with the old; rendering simple extrapolations useless as a forecasting tool.

Politically the left-right divide is way to narrow. Thinking inside this box constricts the mind to such an extent that one will be unable to understand what is going on and how this might end.

The striking ineptitude pundits reveal when trying to analyze today’s political dislocation stems from two simple facts. First, they cannot wrap their head around the fact that some nations apparently drift far left (Spain, Portugal, Italy), while others far right (US, UK, Germany, France) and some in both directions at the same time (Greece). This is easy to understand when acknowledging that the world is not drifting in various directions, but rather just expressing the same message in different language. This misunderstanding stems from the misguided left-right divide whereby the left is advocates of international socialism while the resurgent right is arguing for the same socialism, but rather for the nation state – national socialism. These two systems are almost identical in their opposition to globalization while zealously favoring centralized control of the national economy. Their message is the same; less global trade, more state spending on national projects. Voters will easily jump from the former to the latter when times turn for the worse.

The old left-right divide was, and still is, indistinguishable for the open minded. The following chart attempt to show how we look at the political spectrum. As can be seen, the left-right axis is nothing more than a childish quarrel on which special interest group is entitled to most of the spoils. This model is broken, consumed by its own greed, and the world of politics is rapidly drifting into good old fascism. Whether it is in the form of Trump, Clinton, Hollande, Le Pen, CDU, AfD, Podemos or Golden Dawn is not important. What is important is the fact that this shift is happening under the pretense of some big intellectual battle of good versus evil. It is not. It is pure evil and we are lead astray by the different way of delivering the message. 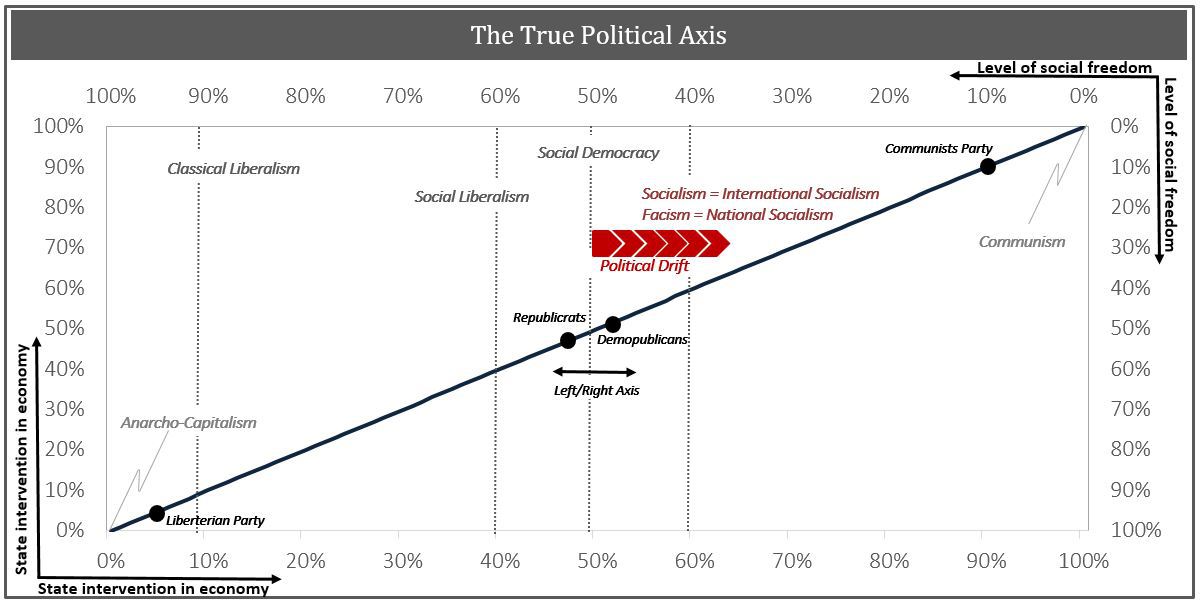 Naturally such grave disparity lead people to conclude it is either the fault of the rich or global competition, when in reality the enormous amount of capital consumption allowed by Keynesian policies is the real culprit. 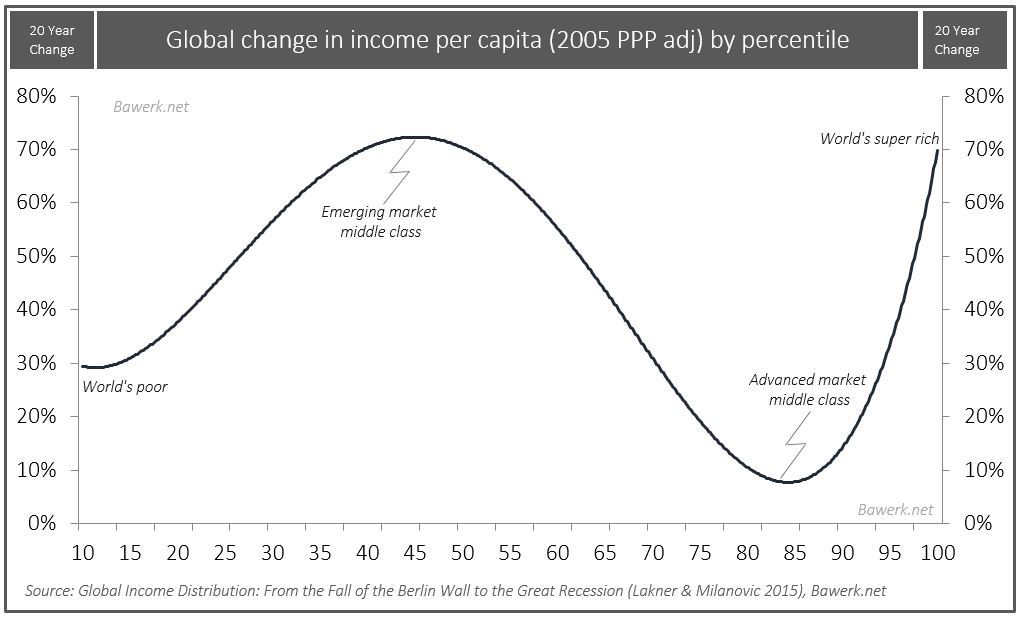 Today’s policies are efforts to maintain the old status quo and can only prolong the middle class suffering. This will obviously lead to more political drift that will quell growth and prosperity, calling for increased used of failed policies ad infinitum.

History teaches us where this will end.

Written By
Other Writer
More from Other Writer
“The globalisation of the [Chinese RMB] seems remorseless and unstoppable,” the Economist...
Read More

0 replies on “The Road to Fascism in Just Two Charts”