In his speech at the New York Federal Reserve of New York on October 5 2016 the Federal Reserve vice Chairman Stanley Fischer has suggested that a visible decline in the natural interest rate in the US (see chart) could be on account of the world glut of saving. According to Fischer both increased saving and reduced investments have potentially significantly lowered the natural rate of interest. For Fisher and other commentators this could signify that the economy might have fallen into a situation where increased saving undermines the economic growth. 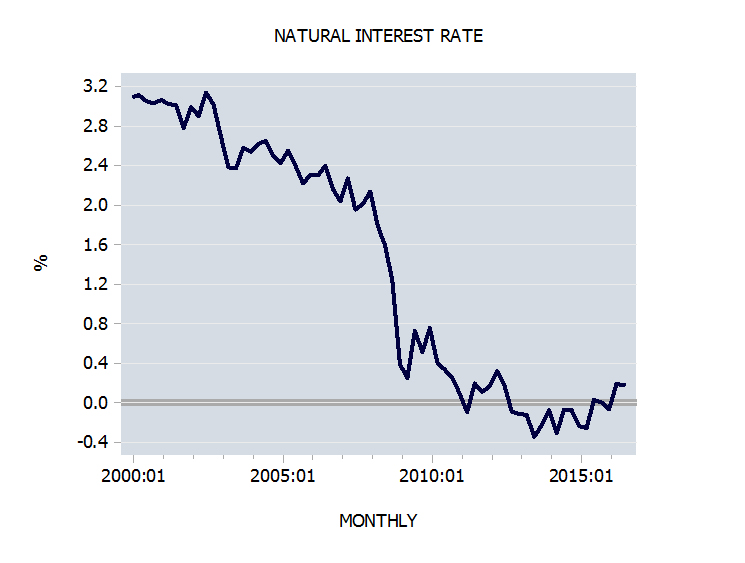 Most economists are in agreement that in order to grow an economy, saving is a must. It is saving that fund investment in capital goods like computers, tools and machinery, which in turn, make the economy more productive. It is argued that whilst saving plays an important role in growing an economy, sometimes too much saving can actually be a bad thing.

According to this way of thinking, if people decide on saving a large proportion of their income, then only a small quantity of output will find a market. Output will have to be low because there will be no demand for a larger quantities of production.

Also, it is held that while saving may pave the road to riches for an individual, if the nation as a whole decides to save more, the result may be poverty for all.

The baker’s saving now permits him to secure other goods and services. For instance, he can now exchange his saved bread for other consumer goods or he can exchange it for oven parts and tools.

By exchanging his bread for other consumer goods, the baker can expand the variety of final goods that he can consume at present.

The exchange of his saved bread for oven parts and tools will enable the baker to enhance the oven, which, in turn, will make it possible for him to raise the quality and the quantity of the production of bread.

Note that it is the bakers’ decision that determines how much of his stock of saved bread will be allocated for his personal consumption and how much allocated towards the buying of oven parts and tools.

Observe that saving here supports the consumption of the baker and the producers of parts and tools. Also, note that when the baker exchanges his saving for final consumer goods and for tools and parts, he pays for them with his saving. His means of payments are saved loaves of bread.

Can there be such thing as too much saving? It is like asking can we have too much real wealth. The greater the pool of saved final consumer goods, the better the quality and the quantity of tools and machinery that can be made, which, in turn, gives rise to a greater production of final consumer goods, i.e., an increase in living standards.

Saving can never be bad for economic growth. Furthermore, as we have seen, saving is entirely absorbed in the consumption of the producers of final consumer goods and the producers of tools and machinery, i.e., capital goods producers.

What about the commonly accepted view that the driving force of an economy is consumer demand for goods and services? In this way of thinking, what poses a threat to economic activity is the scarcity of demand. There is, however, never a problem with demand. What always matters is having enough means to support demand.

According to James Mill,

Relation between saving and money

Now, in a barter economy, people will have difficulty engaging in trade. For instance, a baker may want to buy shoes with his bread. However, the shoemaker has no interest in the baker’s bread. Hence, no exchange will take place and John the baker will not be able to accommodate his needs. Money—the medium of the exchange—resolves these difficulties.
John can now exchange his saved bread for money. Once he has the money, he can exchange it for the goods and services he requires. Money, therefore, enables the goods of one specialist to be exchanged for the goods of another specialist. By means of money, people can channel real saved final consumer goods, which, in turn, permits the widening of the process of wealth generation.
The existence of money also resolves the difficulty of saving perishable goods. Rather than trying to save by storing the bread, the baker can now exchange his unconsumed bread for money and avoid the need of storing the bread.

Needless to say that the storing of the bread runs the risk that in a few days’ time, it will become an unwanted good. The unconsumed production of bread is now “stored” so to speak in money.

When a baker exchanges his money for apples, the baker has already paid for them with the bread produced and saved prior to this exchange.

Money is the baker’s claim, so to speak, on real savings. It is not, however, savings.

Money only provides the ‘facility’ for the baker to pay for various goods and services he wants with his produced and saved bread. Likewise, other producers by means of money can now secure the final goods and services they desire.

Let us now examine the effect of monetary expansion on the pool of real savings. The expanded money supply was never earned, i.e., goods and services do not back it up, so to speak—it was created out of “thin air.” When such money is exchanged for goods it amounts to consumption that is not supported by production.

Consequently, a holder of honest money, i.e. an individual who has produced real wealth that wants to exercise his claim over goods, discovers that he cannot get back all the goods he previously produced and exchanged for money.

He discovers that the purchasing power of his money has fallen. The printing of money undermines wealth generators and thereby weakens the pool of real savings over time. (By being now poorer wealth generators can afford fewer saving than before – their time preferences is likely to increase).

In a world without central banks and the fractional reserve banking the difference between money income and monetary expenditure on consumer goods i.e. monetary saving will be a true reflection of the state of savings.

This is not going to be so in the world where money is generated out of “thin air”. In this case an increase in the difference between the money income (on account of an increase in money supply) for a given amount of monetary expenditure on consumer goods shouldn’t be regarded as an increase in saving.

In fact such an increase should be regarded as bad news for the process of real wealth formation and the pool of real saving.

Now, the pronouncements of various Fed officials such as Stanley Fischer and the former Fed Chairman Ben Bernanke that a down-trend in the natural interest rate, among other factors, is on account of a strong increase in savings are questionable. We suggest, that this down trend is not on account of a glut of saving but on account of the Fed’s policy of monetary pumping and tampering with interest rates in order to bring the economy onto an imaginary growth path of price stability.

Note that the Fed has been aggressively lowering its policy interest rate since May 1981. The federal funds rate target was lowered from 19% in May 1981 to 0.5% by June this year. In response to the Fed’s loose monetary stance our monetary measure (AMS) increased by 882% between May 1981 to June 2016.

A possibility that the US economy might have fallen into a situation where loose monetary policy couldn’t “revive” economic activity any longer could be indicative that the pool of real wealth and the pool of real savings are in serious trouble.

We suggest that a massive monetary explosion since early 1980’s on account of the onset of financial deregulations has likely severely undermined the process of real wealth formation.

To revive the economy what is required is not to increase government outlays in order to lift the aggregate demand as suggested by many experts. What is required is to actually drastically reduce government outlays and Fed’s activities in financial markets. This will provide more scope for the private sector to get on with the business of real wealth generation and to meaningfully revive the economy.

[1] James Mill, On the overproduction and underconsumption fallacies. Edited by George Reisman, a publication of The Jefferson School of philosophy, Economics, and Psychology – 2000.

One reply on “Is the glut of saving behind downtrend in natural interest rate?”