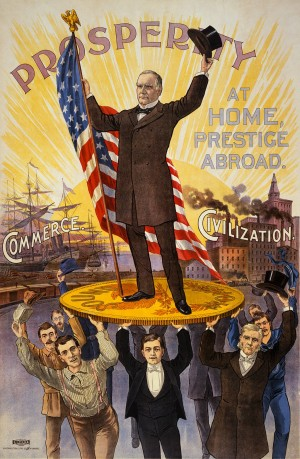 Marc Levinson writing recently in The Wall Street Journal provides a very pessimistic view for the American Dream, “Why the Economy Doesn’t Roar Anymore: The long boom after World War II left Americans with unrealistic expectations, but there’s no going back to that unusual Golden Age“:

People who had thought themselves condemned to be sharecroppers in the Alabama Cotton Belt or day laborers in the boot heel of Italy found opportunities they could never have imagined. The French called this period les trente glorieuses, the 30 glorious years. Germans spoke of the Wirtschaftswunder, the economic miracle, while the Japanese, more modestly, referred to “the era of high economic growth.” In the English-speaking countries, it has more commonly been called the Golden Age.

The Golden Age was the first sustained period of economic growth in most countries since the 1920s. But it was built on far more than just pent-up demand and the stimulus of the postwar baby boom. Unprecedented productivity growth around the world made the Golden Age possible. In the 25 years that ended in 1973, the amount produced in an hour of work roughly doubled in the U.S. and Canada, tripled in Europe and quintupled in Japan.

Ever since the Golden Age vanished amid the gasoline lines of 1973, political leaders in every wealthy country have insisted that the right policies will bring back those heady days. Voters who have been trained to expect that their leaders can deliver something more than ordinary are likely to find reality disappointing.

Levinson, whose column uses “Golden Age” as its leitmotif, strangely fails to make the connection, or even explore, the fact that the era he calls the Golden Age correlated precisely with America (and the world) being on a form of gold standard, particularly the modified gold standard known as the Bretton Woods System. (Bretton Woods had the inherent flaw of using the dollar as an international reserve asset but, until that flaw undermined it, it served equitable prosperity.)

Bretton Woods was finally, formally, ended in 1973, the very year that Levinson points to as the end of the Golden Age. This appears to have far more significance than he assigns to it.

While correct as far as it goes, this analysis is incomplete. Levinson seems to consider productivity growth a stochastic, meaning random, factor. That’s not obviously true.

There’s an underlying factor to consider. The gold standard maintained the integrity of the most important unit of account in the economy: the dollar. It is easy to understand how fluctuations in our units of account — inches and ounces — would throw enormous sand in the gears of industry, degrading productivity. Their definition does not fluctuate. There is no such thing as a “floating” ounce or inch. The idea of a floating — meaning wobbly — dollar is, simply, gobbledygook.

A wobbly dollar undermined the economy. It was a significant factor in ending, after one term, the presidencies of Gerald Ford and Jimmy Carter. It seriously retarded job creation under George W. Bush and Barack Obama. A wobbly dollar throws at least a much sand in the gears of the economy as a wobbly inch or ounce would.

It’s worth looking harder at the correlation between “floating exchange rates” — a euphemism for a wobbly dollar (and other wobbly currencies) and productivity. Reagan and Clinton, under the Fed’s Great Moderation — an imperfect proxy for the gold standard — saw enormous job growth and upward mobility. Call it a Silver Age. While not as good as gold, it was far superior to the Age of Dross in which we have been mired for 16 years.

Whether Trump or Clinton wins, America’s economic success over the next four years — and their chance of re-election — will depend in large measure on “It’s the economy, Smarty,” getting job growth and upward income mobility going for workers. To achieve equitable prosperity, the next president will need to be really smart about, rather than neglecting, monetary policy.

Treating the dollar with “benign neglect” is a recipe for massive poverty and political failure … as too many presidents have discovered too late. Donald Trump promises to make America great again. Hillary Clinton aspires to make America good. The next president would be well served to take a really hard look at the correlation between the gold standard and a Golden Age making America both great and good.

Ralph Benko is senior advisor, economics, for American Principles in Action, in Washington, DC, specializing in the gold standard and advisor to and editor of the Lehrman Institute's The Gold Standard Now. He is editor-in-chief of thesupplyside.blogspot.com. With Charles Kadlec, he is co-author of The 21st Century Gold Standard: For Prosperity, Security, and Liberty available for free download here. Benko and Kadlec are co-editors of the Laissez Faire Books edition of Copernicus's Essay on Money. He also manages the Facebook page The Gold Standard. Follow him on Twitter as TheWebster.