Ever since central banks embarked on quantitative easing (QE) they were effectively taking control of their domestic government yield curves. Of course this was de facto. Now, in Japan, it has finally been declared de jure since the Bank of Japan (BoJ) announced the (not so) new policy of “Yield Curve Control”.  New Framework for Strengthening Monetary Easing: “Quantitative and Qualitative Monetary Easing with Yield Curve Control”, published on 21st September, is a tacit admission that BoJ intervention in the Japanese Government Bond market (JGB) is effectively unlimited.  This is how they described it (the emphasis is mine):-

The Bank will purchase Japanese government bonds (JGBs) so that 10-year JGB yields will remain more or less at the current level (around zero percent). With regard to the amount of JGBs to be purchased, the Bank will conduct purchases more or less in line with the current pace — an annual pace of increase in the amount outstanding of its JGB holdings at about 80 trillion yen — aiming to achieve the target level of a long-term interest rate specified by the guideline. JGBs with a wide range of maturities will continue to be eligible for purchase…

By the end of September 2016 the BoJ owned JPY 340.9trln (39.9%) of outstanding JGB issuance – they cannot claim to conduct purchases “more of less in line with the current pace” and maintain a target 10 year yield. Either they will fail to maintain the 10 year yield target in order to maintain their purchase target of JPY 80trln/annum or they will forsake their purchase target in order to maintain the 10 year yield target. Either they are admitting that the current policy of the BoJ (and other central banks which have embraced quantitative easing) is a limited form of “Yield Curve Control” or they are announcing a sea-change to an environment where the target yield will take precedence. If it is to be the latter, infinite QE is implied even if it is not stated for the record.

I believe the 21st September announcement is a sea-change. My concern is how the BoJ can ever hope to unwind the QE. One suggestion coming from commentators but definitely not from the BoJ, which gained credence in April – and again, after Ben Bernanke’s visit to Tokyo in July – is that the Japanese government should issue Zero Coupon Perpetual bonds.  Zero-coupon bonds are not a joke – 28th August – by Edward Chancellor discusses the subject:-

Bernanke’s latest bright idea is that the Bank of Japan, which has bought up close to half the country’s outstanding government debt, should convert its bond holdings into zero-coupon perpetual securities – that is, financial instruments with no intrinsic value.

The difference between a central bank owning zero-coupon perpetual notes and conventional bonds is that the former cannot be sold to withdraw excess liquidity from the banking system. That means the Bank of Japan would lose a key tool in controlling inflation. So as expectations about rising prices blossomed, Japan’s decades-long battle against deflation would finally end. There are further benefits to this proposal. In one fell swoop, Japan’s public-debt overhang would disappear. As the government’s debt-service costs dried up, Tokyo would be able to fund massive public works.

In reality a zero coupon perpetual bond looks suspiciously like good old-fashion fiat cash, except that the bonds will be held in dematerialisied form – you won’t need a wheel-barrow:- 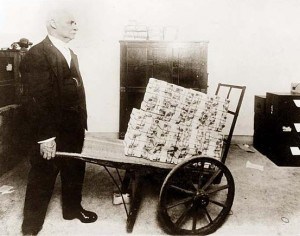 Issuing zero coupon perpetuals in exchange for conventional JGBs solves the debt problem for the Japanese government but leaves the BoJ with a permanently distended balance sheet and no means of reversing the process.

Japan has been encumbered with low growth and incipient deflation for much longer than the other developed nations. The BoJ has, therefore, been at the vanguard of unconventional policy initiatives. This is how they describe their latest experiment:-

The experience so far with the negative interest rate policy shows that a combination of the negative interest rate on current account balances at the Bank and JGB purchases is effective for yield curve control. In addition, the Bank decided to introduce new tools of market operations which will facilitate smooth implementation of yield curve control.

The new tools introduced to augment current policy are:-

The reality is that negative interest rate policy (NIRP) has precipitated an even swifter decline in the velocity of monetary circulation. The stimulative impact of expanding the monetary base is negated by the collapse it its circulation.

An additional problem has been with the mechanism by which monetary stimulus is transmitted to the real economy – the banking sector. Bank lending has been stifled by the steady flattening of the yield curve. The chart below shows the evolution since December 2012:- 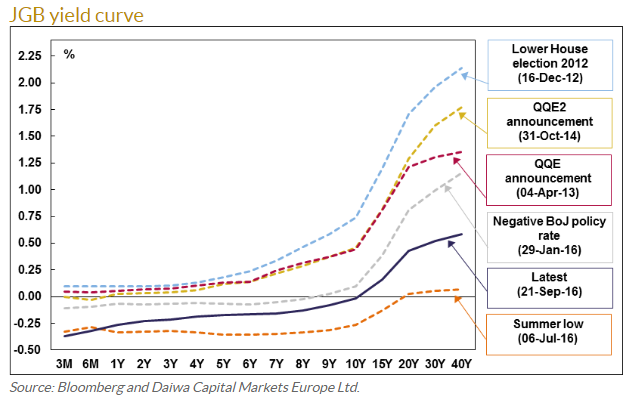 10yr JGB yields have not exceeded 2% since 1998. At that time the base rate was 0.20% – that equates to 180bp of positive carry. Today 40yr JGBs yield 0.57% whilst maturities of 10 years or less trade at negative yields. Little wonder that monetary velocity is declining.

The tightening of bank reserve requirements in the aftermath of the great financial recession has further impeded the provision of credit. It is hardly optimal for banks to lend their reserves to the BoJ at negative rates but they also have scant incentive to lend to corporates when government bond yields are negative and credit spreads are near to historic lows. Back in 1998 a AA rated 10yr corporate bond traded between 40bp and 50bp above 10yr JGBs, the chart below shows where they have traded since 2003:- 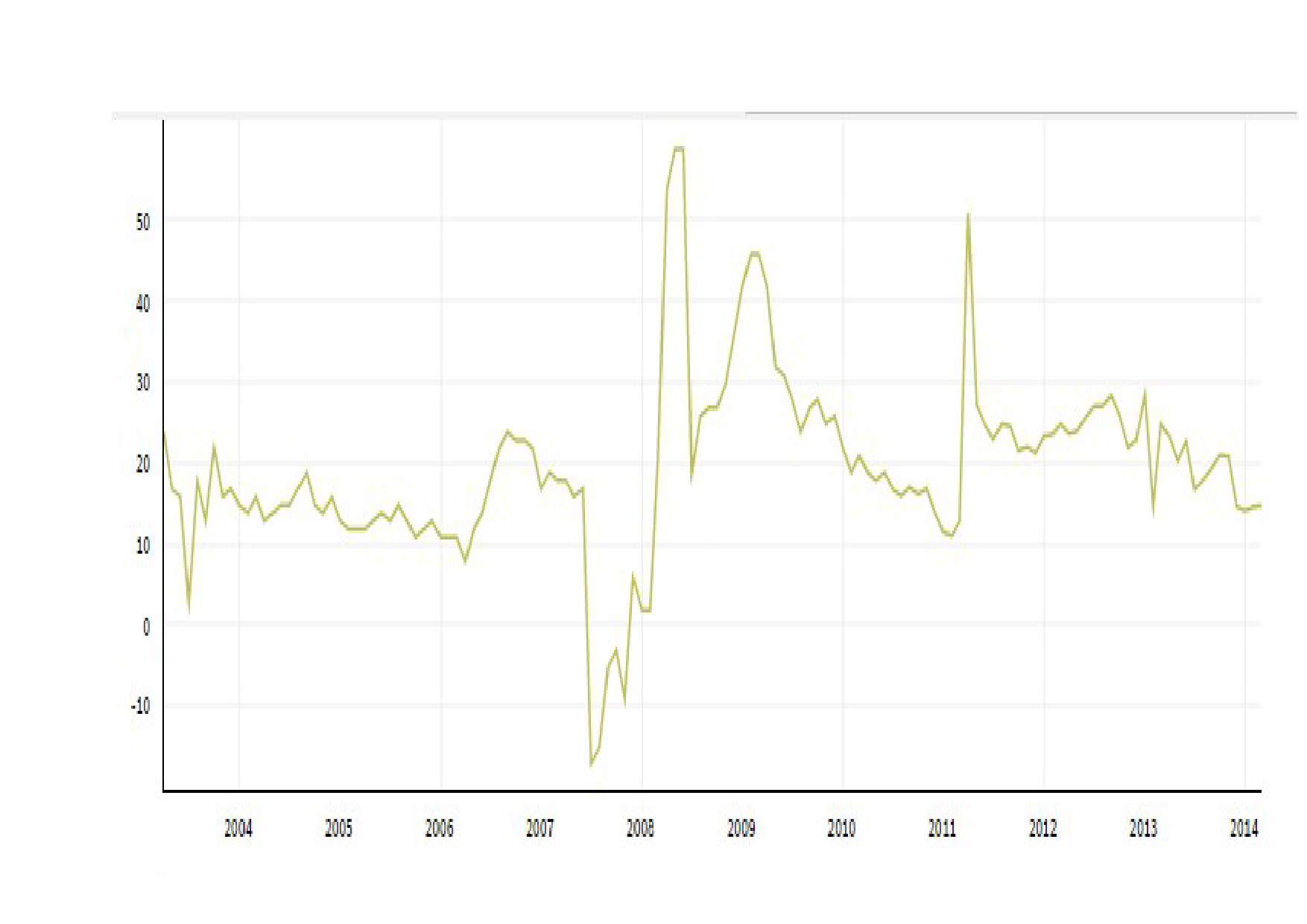 For comparison the BofA Merrill Lynch US Corporate AA Option-Adjusted Spread is currently at 86bp off a post 2008 low of 63bp seen in April and June 2014. In the US, where the velocity of monetary circulation is also in decline, banks can borrow at close to the zero bound and lend for 10 years to an AA name at around 2.80%. Their counterparts in Japan have little incentive when the carry is a miserly 0.20%.

This is how the BoJ describe the effect NIRP has had on lending to corporates. They go on to observe that the shape of the yield curve is an important factor for several reasons:-

The BoJ’s hope of stimulating bank lending is based on the assumption that there is genuine demand for loans from corporations’: and that those corporations’ then invest in the real-economy. The chart below highlights the increasing levels of Japanese share buybacks over the last five years:- 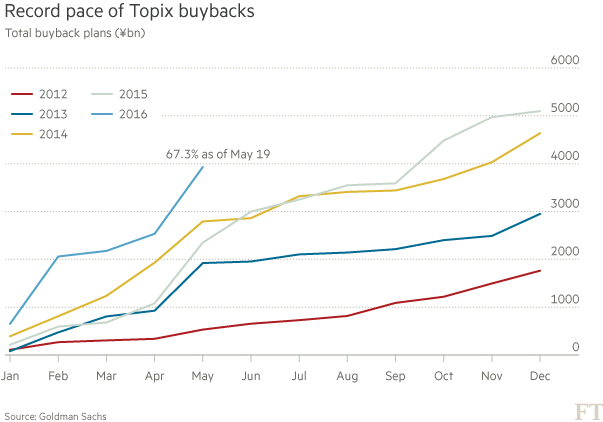 Share buybacks inflate stock prices and, when buybacks are financed with debt, alter the capital structure. None of this zeitech stimulates lasting economic growth.

If zero 10 year JGB yields are unlikely to encourage banks to lend and demand from corporate borrowers remains negligible, what is the purpose of the BoJ policy shift? I believe they are creating the conditions for the Japanese government to dramatically increase spending, safe in the knowledge that the JGB yield curve will only steepen beyond 10 year maturity.

I do not believe yield curve control will improve the economics of bank lending at all. According to World Bank data the average maturity of Japanese corporate syndicated loans in 2015 was 4.5 years whilst for corporate bonds it was 6.9 years. Corporate bond issuance accounted for only 5% of total bond issuance in Japan last year – in the US it was 24%. Even with unprecedented low interest rates, demand to borrow for 15 years and longer will remain de minimis.

Financial markets will begin to realise that, whilst the BoJ has not quite embraced the nom de guerre of “The bank that launched Helicopter Money”, they have, assuming they don’t lose their nerve, embarked on “The road to infinite QE”. Under these conditions the JPY will decline and the Japanese stock market will rise.

0 replies on “Yield Curve Control – the road to infinite QE”