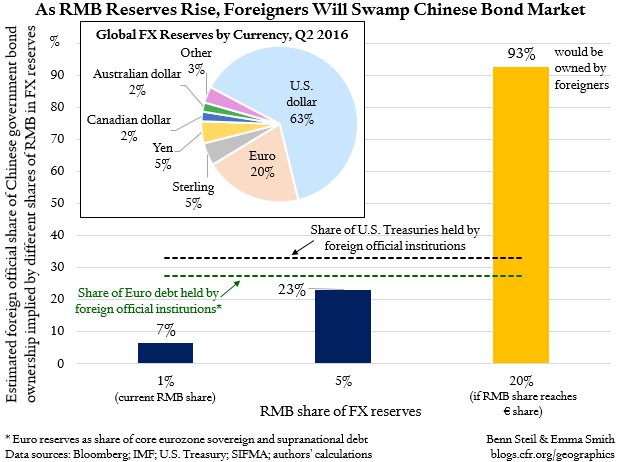 The Chinese RMB’s ascension into the IMF’s SDR currency basket in October has been widely seen as an important first step on its path to becoming a global reserve currency.  But we would argue that the path is a very long one, and that even rivaling the euro for the number two spot may, without implausible reforms to China’s political economy, be beyond the RMB’s reach.

Since 2013, the world’s central banks have upped their holdings of RMB-denominated assets (overwhelmingly government bonds) by around $27 billion, taking the currency’s share of global FX reserves from 0.7 percent to 1 percent.  If and as China continues opening its financial markets, RMB assets will, all else being equal, become more attractive as FX reserves.  Chinese 10-year government bonds currently yield 3 percent, while the weighted average yield of government bonds for other reserve currency countries is only 1.9 percent.

In 2013, the central bank of Australia announced that it would increase the RMB share of its reserves from 0 percent to 5 percent, which it reached in 2015. If the world were to follow its lead, and hit the 5 percent target, foreign official institutions (FOIs) would—as shown in the graphic above—own 23 percent of Chinese central government debt, given the current size of the market.

Is that a lot?  The short answer is yes.  The U.S. dollar accounts for 63 percent of global FX reserves, and FOIs own 33 percent of U.S. Treasury debt.  FOIs would own the equivalent proportion of Chinese government debt with the RMB at only 7 percent of global reserves.

The euro, the number-two reserve currency, accounts for 20 percent of global reserves.  Assuming euro reserves are all held in eurozone core-country and supranational debt, FOIs hold 27 percent of these assets—pretty close to their share of U.S. Treasuries, despite dollar reserve holdings being vastly higher.  For the RMB to match the euro’s share of global reserves, FOIs would have to hold an implausible 93 percent of Chinese government debt.

In order for the RMB to rival the euro, China’s government bonds outstanding would have to triple in order to keep FOI ownership under a third.  Is this possible?

Well, the IMF expects China’s central government debt to double by 2021. It may grow even faster if the central government bails out debt-laden corporates or local governments.  That sort of debt growth, however, would not create the sort of “risk-free” variety beloved of FOIs.  Furthermore, there are signs that financial liberalization in China may actually be headed into reverse, as China struggles to prevent a surge in capital outflows with slowing growth.  The bottom line is that the RMB may not be ready for big-league reserve status for decades—if ever.

Written By
Other Writer
More from Other Writer
Economic forecasting, no matter how complex the underlying model may be, is...
Read More