It took a while, but the world are slowly coming to grips with the simple fact that the red-suzerains in Beijing are not the infallible leaders en route to a new superior economic model as they thought they were. All the craze that emanated from the spurious work of Joshua Cooper Ramo, which eventually led to works like “How China’s Authoritarian Model Will Dominate the Twenty-First Century,” are slowly catching up to reality. We never bought into it and our prediction for 2017 is that most of the pundits commenting on the red Dragon will realize how bad the situation in China really is.  That being said, there were still Japan-bulls in the late 1990s that still believed Japan would eventually become the largest economy on the planet and dominate the world. If we are right, the heliocentric worldview China apparently is taking will quickly turn geocentric, just as it is about to do in the western world. Domestic problems will engulf the leadership in Beijing, and there will be less time to squabble over petty reefs in the South China Sea. The danger is obviously that the political establishment in China will be in dire need to distract the hordes of angry masses that are about to lose their life savings.

Champions of authoritarian rule saw in China a way to Kallipolis, whereby the platonic Philosopher Kings finally get to rule the world. Not few times have we debated the “China Model” with Chief Economists, Ph.Ds. and other “serious” people, and in just as many times have we been surprised to discover the passionate disdain for so-called lower classes and the unabashed need to guide these fully grown-up children onto the righteous path. A small tax tweak here, a subsidy there and people can allegedly be incentivized to do the “right” thing. Right, obviously, is whatever the philosopher kings deem it to be.  China epitomized Kallipolis for all the kings out there, which is probably why criticism of the system felt personal to them. The China Model has thus been embraced wholeheartedly by the Western elite and explains why China’s many faults have not been addressed properly.

Another reason for the kings to be a bit evasive is that the China model is, as aforementioned, exactly what they want, but they cannot really say that. China, as we all know, is extremely simple. The lowest platonic classes, the laboring classes, are unbalanced in the sense that greed and foolishness rule these people, therefore they can, and should, be used as lowly paid slaves to the betterment of the whole. The savings they accumulate are controlled and directed as the kings see fit. By plowing enormous amounts of savings back into the system, the economy, as measured by GDP, “grows” and the kings can point to all wonders they are able to create.

There is a great downside to this system though. The hapless laboring classes cannot afford to live the life their output from production would suggest they should. Since the kings set both wages and return on savings, a mismatch is created between domestic purchasing power and domestic output.

In their infinite wisdom, the kings decided to rectify this little glitch by sending excess production abroad through heavy-handed exchange rate manipulation. Should foreigners not spend enough though, then the politburo could always resort to domestic boondoggles as convenient safety valves. After the financial crisis of 2008 and 2009 this is exactly what happened on a scale never ever witnessed before.

However, in the period leading up to the great financial crisis foreigners bloated on credit were more than happy to indulge themselves with cheap Chinese goods. The Chinese on their side had to adjust their monetary policy to subsidies exports and penalize imports through a low valued Yuan.  In order to do so the PBoC were forced to buy billions of dollars and other FX flowing into mainland China. Despite raising banks’ reserve requirements, printing up RMBs at this pace led to a massive inflationary boom in the Chinese economy. In other words, the Chinese monetary policy was extremely pro-cyclical as they essentially were forced to copy the folly conducted in the Eccles building.

But as everyone loves the effects of inflation and the false prosperity that spreads throughout society, no one complain whilst the good time lasts. When the imbalances become too great to hide though, it all turns ugly quite quickly. The inflation correspondent with capital inflows must necessarily become deflationary when money starts to flow out. As domestic bubbles start to deflate and economic prospects turn sour, capital will flow out and the whole process reverses. Downward pressure on the exchange rate forces the PBoC to buy back legacy Yuan’s by selling FX reserves. At this stage reserve requirements are lowered in order to free up more Yuan by leveraging banks’ balance sheets, but as the inflationary boom could not be fully mitigated on the way up, the deflationary forces on the way down are impossible to control. 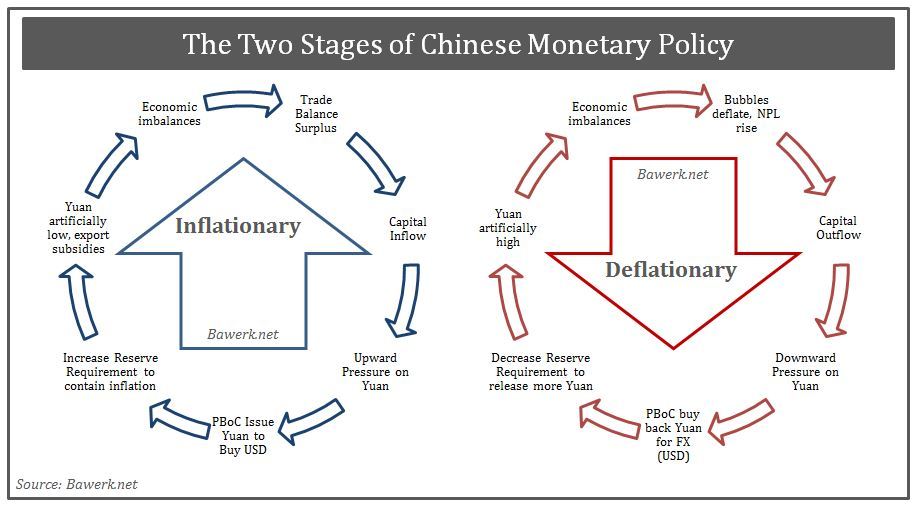 The blue and red circles are represented with the same color code in the Yuan chart below. In the blue area the exchange rate is kept stable despite inward capital flow as the PBoC sells Yuan to buy dollars. In the red area the Yuan is falling against the dollar and the PBoC is forced to buy back Yuans with previously accumulated dollars. Since liquidity is withdrawn domestically a falling exchange rate is associated with internal deflation. 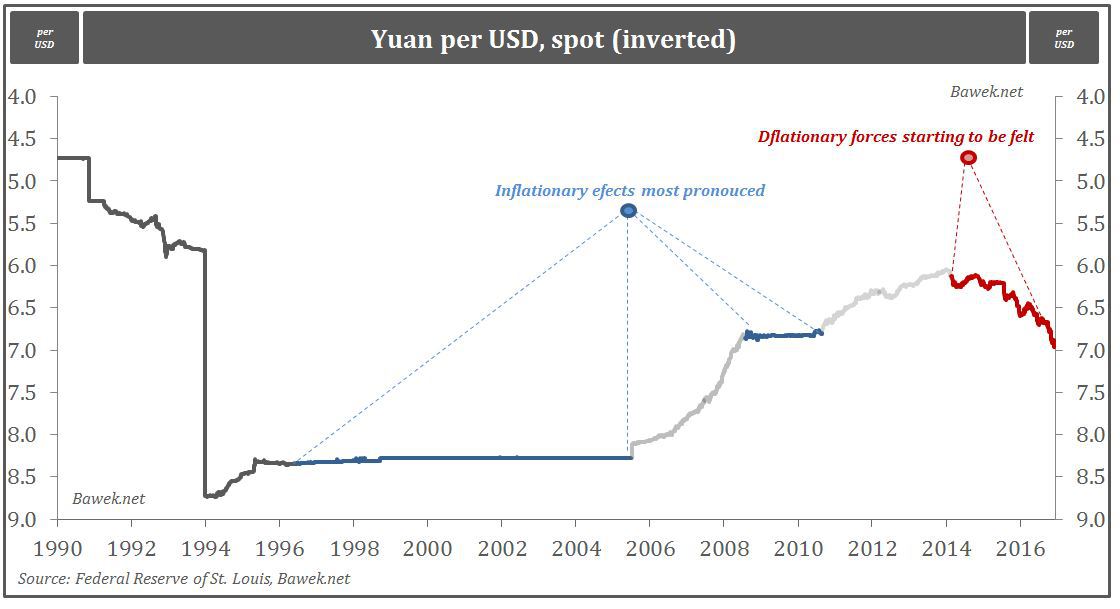 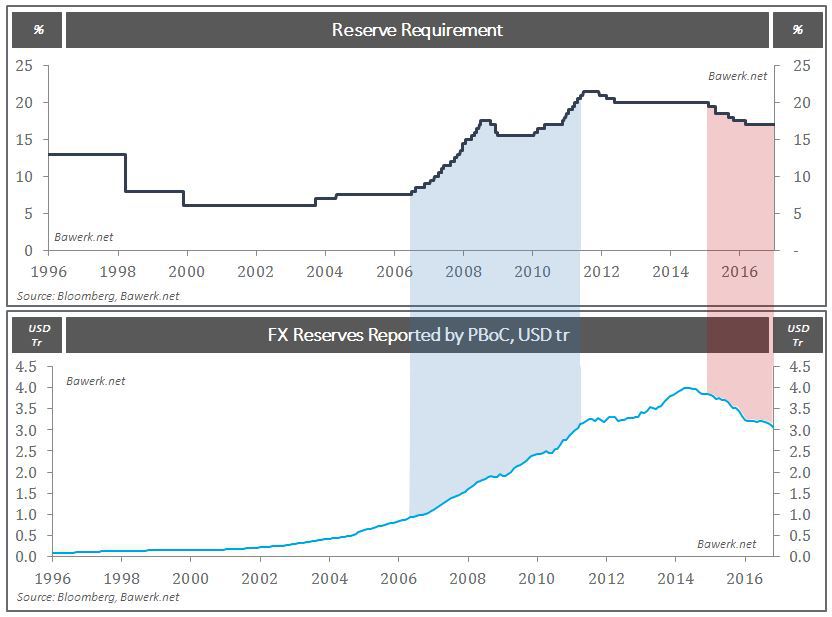 The problem for PBoC is that their task is impossible to pull off. The enormous amount of waste embedded in the system as a result of years of inflationary policies has left the Chinese economy riddled with bad debt and probably trillions in non-performing loans. Consequently, investors believe further exchange rate depreciation will be needed and the offshore (CNH) forward market price in the typical Chinese approach of incremental change. As long as FX reserves are plentiful, complacency will be the name of the game, but that will leave a lot of people exposed to a rude awakening. 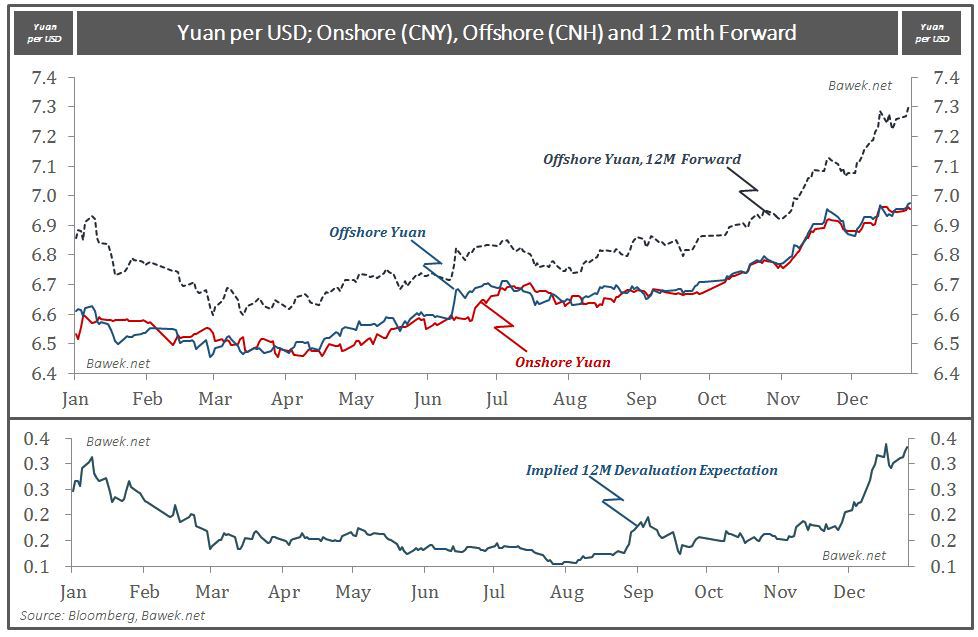 With the PBoC fighting to defend the Yuan they will certainly create trouble in domestic money markets. Draining banks for Yuans as dollars flow abroad; in times when debt-funded boondoggles must roll-over credit lines is a recipe for financial crisis. Banks will be forced to scale back, the infamous Chinese shadow system is under regulatory attack and in any case, debt funding costs will be more expensive for the thousands upon thousands of companies with restricted cash-flows. 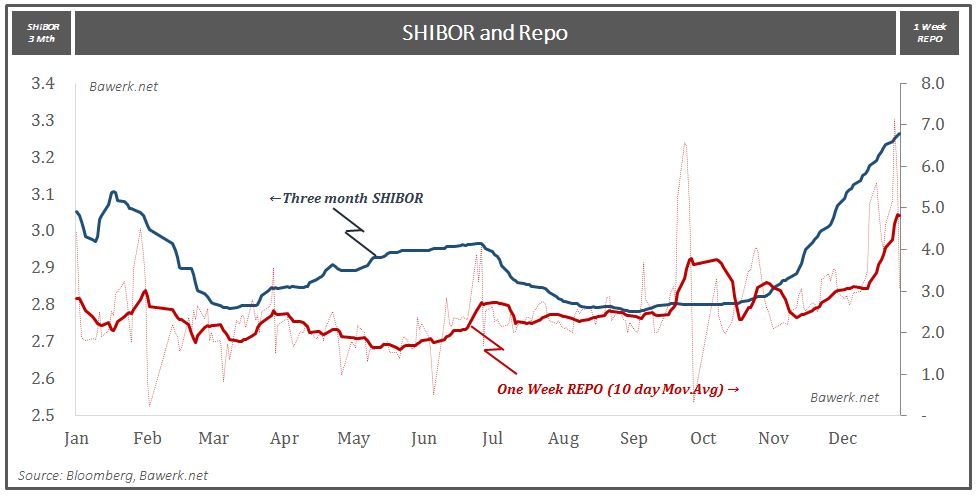 In conclusion, the Chinese miracle is built on a pile of debt with only an unconstrained printing press to support it.  As use of the printing press now is heavily restricted, the balancing act of supporting the Yuan and supplying enough money to local markets, will be nigh on impossible. Some argue that there will not be a funding crisis in China, simply because the PBoC can always fund a highly centralized credit system. The problem with this line of thinking is that the exchange rate target will have to be abandoned if they do. Either there will be large scale devaluation or alternatively a domestic financial crisis.

All this does not necessarily mean a Lehman-moment, where everything crashes overnight, but rather a “managed” transition whereby further credit creation is hamstrung by the lack of real capital funding available. In short, China will evolve more like Japan, with something close to zero growth for years, if not decades, as the legacy of credit fuelled “growth” is never properly dealt with.

The question of whether to let the exchange rate or the banking system take the hit seems to be a question up for debate, even among the red kings in Beijing. Late 2014 it seemed like they wanted the domestic banking system, and hence “growth” adjust. The PBoC decided to put the brakes on and slow the economy down. Commodity prices collapsed as the China Miracle probably grinded to a halt. The fantasy GDP numbers obviously did not reflect an economy at a standstill, but neither money flows nor commodity prices do lie in that regard. Inclusion into the SDR basket was probably so important that they were willing to sacrifice short-term growth.

However, from mid-2016 it seems Beijing panicked and with the SDR inclusion secured, the PBoC seem hell-bent on stimulating the economy again. As they crank up the printing press once more, further Yuan depreciation will be the way forward. That being said, internal inconsistencies have grown so large that the printing press might not do much good meaning they will end up with a weaker Yuan and no ultimately no growth.

“He was a portly, middle-aged figure in an ill-fitted suit, scuffed black shoes, and the sort of sagging thin black socks I came to…