Most economists agree on one thing; price controls do not work. Many go on to say they create shortages of goods, which inevitably drives black market prices even higher than they would otherwise be.

Price controls were last tried in the 1970s, and everyone swore, never again. The suggestion that they could return is laughed at today, even taken as madness. Only in Venezuela and Zimbabwe.

However, the likelihood of their reintroduction is greater than generally realised, and is increasing all the time now that there are signs of rising prices. So far, central bankers are claiming that an increase towards their inflation targets of two per cent in the CPI (already achieved in the US) is a sign that economic normality is returning. They are also confident they can manage the rate of price inflation, so it should not present a risk. But in all previous credit-driven business cycles, the rate at which prices increase has always been beyond the control of central banks. This article explains why, and highlights the central role of statistical propaganda, of which its promoters are hardly aware. It also suggests how inflation outcomes are likely to evolve. We shall start by looking at officially-recorded prices.

The first of four major fallacies behind state-sponsored price statistics is the application of averages. Not one person on earth buys the products in the consumer price index in the proportions they are included in it, nor do they pay the assumed prices. Welcome to the macroeconomists’ favourite tool, the average. Averages allow them to plan our prices for us. We have all been averaged. Secondly, the prices are always historic, and what we bought yesterday is not the same as what we buy today, and even that differs from what we will buy tomorrow. Taking static numbers that no longer apply misrepresents dynamic markets that continually evolve.

Because the technique of averaging while assuming the economy is static permits economists to escape from the reality of considering individual people, they can then indulge in flights of fancy. In the name of improvement, we welcome hedonics. Hedonics, we are told, is a logical approach to adjusting prices for product improvements, and the likelihood that if the price rises for one product, at the margin people will buy a cheaper alternative. Again, this concept is flawed, because someone employed by the state sits in judgement on how you and I as individuals value the goods and services we buy, and what makes us choose between them. And given the state wishes to emphasise its success in the management of our affairs, this flaky concept is capable of being loaded to produce a desired result.

Unbiased attempts to replicate an index of inflation show a far higher rate. In the US, John Williams’s Shadow Stats shows a rate closer to 10% than the 2.1% shown on the official CPI-U statistic. That is the extent of the change in method since 1980. The Chapwood index confirms.

Imagine if the state admitted to the higher rate! The impoverishment of the masses, through loss of purchasing power of their wages and savings would become obvious to one and all, leading to widespread anger, discontent and labour disruption. The economy would clearly be in a prolonged slump, rivalling the 1930s. The Fed would be under considerable pressure to raise interest rates sharply to stop price inflation rising out of control. And the government would be transparently bust. None of this can be confessed to, in the national interest, so the propaganda becomes wholly justified.

There are surplus dollars deposited in America’s banking system, the quantity having doubled with over $6trillion created since the Lehman crisis. If the public cottons on, perhaps it might end up dumping a tsunami of surplus fiat money. This is an ever-present risk in the world of unsound money, which is hostage to the valuation placed upon it by both the population and the foreign exchanges. Just imagine what would happen to the dollar, if the American public realised that its purchasing-power has been depreciating at a far faster rate than officially admitted, while the Fed funds rate has been suppressed to less than 1%.

This is why statistical propaganda has become central to economic and monetary policy. It is also why anyone who forecasts a deteriorating price inflation outlook from the current declared position misunderstands the true position. Analysts should be saying that the dollar’s rate of price inflation is expected to increase from the current level of roughly 10%. This is more accurate, but much more frightening, than saying inflation will rise from 2%. The inflation crisis is already well advanced, having been concealed for a considerable time. This is entirely due to statistical propaganda.

The oldest cliché in politics is you can’t fool all the people all the time, and the eventual realisation that ordinary people have been conned over their money is likely to provoke considerable discontent. The question is, how will the dénouement come about?

There are broadly two text-book paths before us leading towards monetary destruction, assuming an event such as an EU crisis doesn’t get there beforehand. The first path is relatively simple: the masses begin to see through the macroeconomic propaganda with little or no warning, and begin to dump their money in return for goods. This leads us directly into von Mises’s crack-up boom, where the sole reason for buying goods is to dump worthless currency. The second outcome is that interest rates are raised by the central banks to the point where widespread insolvencies are triggered, leading to a new financial crisis. This would be followed by a rescue of the banking system that requires another round of unlimited monetary and credit expansion. An additional round of limitless credit could then prove to be the currency’s final undoing. I shall consider each of these options in turn.

The people stop being fooled

The dawning realisation that inflation statistics have been telling anything but the truth has been made more likely by the Anglo-Saxon rejection of the political status quo in 2016. Brexit and Trump’s election are evidence that the silent majorities in two major thought-leading countries were in a mood for rebellion, and there are strong signs of similar dissent throughout Europe. The political classes are losing credibility and are no longer automatically believed, so surely this process of discovery by ordinary people has further to run.

There is little doubt that this year officially-admitted price inflation in the US will increase. Commodity and energy prices rose significantly last year, the stimulus to consumer spending from zero interest rates has bolstered nominal GDP, and President Trump’s plans for infrastructure spending and tax cuts will almost certainly lead to yet higher prices for US consumers.

As the reserve currency, it is the dollar that matters most, so we must take our cues from America. We are all waiting to see how monetary policy at the Fed evolves. If the Fed detects, as I believe is the case, that a Fed funds rate exceeding 2% risks triggering a debt crisis, they will go no further than that level. At that stage, the official CPI rate which is already at the Fed’s 2% target, could be commonly expected to rise to 4% and above. It would become increasingly obvious that consumer prices would actually be rising at a faster rate than that captured in the official statistics, because the evidence will have become undeniable. There would only be one option open to the authorities, and that is to perpetuate the propaganda over price inflation by introducing price controls, probably sold to us as a temporary measure (but we all know what that means).

Another heave of the credit cycle

A second outcome would be interest rates are raised by the Fed beyond the point where a widespread debt liquidation is triggered. This is what happened in 2007, 2000, 1989 and 1980, illustrated by the declining peaks in the FFR in the chart below. 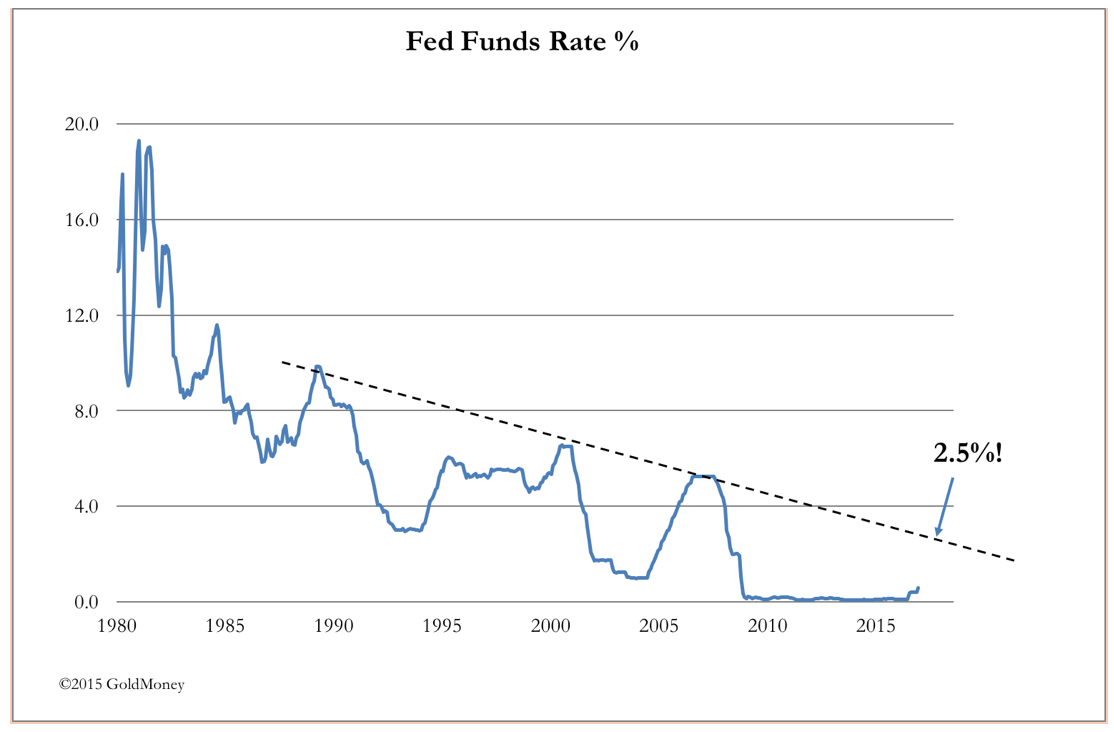 The Fed obviously thinks it can manage the credit cycle and avoid this happening again, just as it thought it could on all previous occasions. If the official rate of inflation increases, and continues to increase, the Fed will probably raise interest rates until a credit crisis occurs.

The dynamics behind this inevitability are worth considering. The stimulation to consumption from low nominal interest rates accelerates as prices rise, because real interest rates become more negative. A preference for buying goods and spending on services, relative to holding depreciating currency, begins to gain momentum. Businesses, seeing the expansion of consumer demand and rising prices, increase their own demand for low-cost capital to invest in production of goods, which are expected to be sold for higher prices. Bankers become increasingly confident in their lending to the point where they compete to lend. Fortunately for the banks, they have substantial reserves at the Fed to draw upon to increase their loan books.

The Fed cannot stand back and watch this self-feeding growth in consumer and economic confidence get out of control, because it accelerates price inflation. If it realises the dangers of raising rates beyond a tipping point, the Fed will start talking about the need for “temporary” price controls to calm things down, as mentioned above. If it doesn’t, the FFR will be raised until a credit and banking crisis occurs.

In that event, the Fed will have no option but to rescue the banks by buying dodgy assets off them on an even greater scale than in the wake of the Lehman crisis. Bond prices will be underwritten by yet more massive QE, thereby guaranteeing government borrowing. We know this, because on every credit cycle the interventions become progressively larger, increasingly desperate and increasingly destabilising.

We also know that every time we find the credit cliff has crumbled from under our feet and we find ourselves tumbling into the financial unknown, the Fed has rescued us by throwing increasing amounts of money and credit at the banks. The trick has always been to regain systemic confidence, which requires propaganda about money.

I would judge this to be the more likely outcome, in the absence of other major systemic risks impacting first. That ordinary people will discover the truth about unsound money for themselves is less likely. People want to believe the propaganda about the purchasing power of fiat currency, because the contrary thought, that it is potentially worthless, is too unpleasant to contemplate. The foreign exchanges, dominated by banks licensed by the American authorities, might be equally slow to understand they are victims of financial propaganda, either because of their culture or because they take their instructions from the Fed. But an escalation of price inflation without the Fed tightening cannot be ruled out. Markets, which represent the collective actions of individuals, always win over governments in the end, and theoretically that end can occur at any time.

Whether or not we face a deterioration of the purchasing power of fiat currencies without one last hurrah of the credit cycle, the American monetary authorities, with the acquiescence of those of the other nations, have relied on statistical propaganda to conceal the consequences of buying off economic reality by accelerating the debasement of fiat money. It is a path that leads inevitably to discovery of the monetary fraud, but not an acceptance of blame. It will be alleged to be the fault of free markets, and that is why governments will most likely be driven even further to control them, through the suppression of prices by regulation.

This is a documentary that is long overdue, written from the perspective of the Austrian School. These are the economists of Business Cycle Theory…