As discussed last Friday, Greece is back in the public spotlight and – hardly surprising – it is once again on the verge of collapse. Greek yields surged in the past week as the country didn’t secure a positive review at the Eurogroup on 26 January. Additional noise came from indications that the IMF still views the Greek debt as unsustainable without further measures from the Greek government (the term was “explosive”), as well as  additional debt relief clarifications from European creditors. 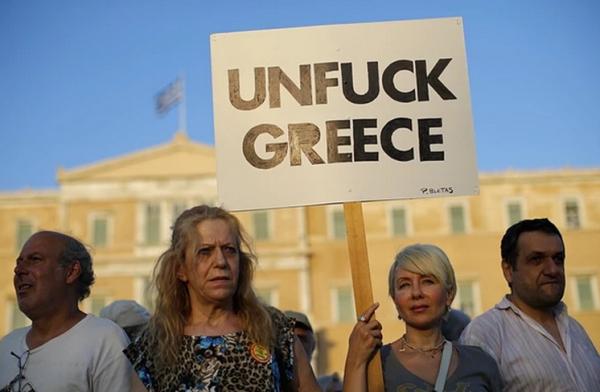 So is a rerun of the summer of 2015 inevitable? According to Credit Suisse’s Giovanni Zanni, the most likely outcome – for now-  is an amicable, and quick, resolution. However the longer nothing substantive changes, the more likely it is that the 4, far less pleasant scenarios, kick in.

While it is difficult  to attribute a specific probability to each of those, they are ranked them below by the most to the least likely. These scenarios should also provide a roadmap for investors in the process of assessing when risks could increase and when they could die down: as a rule of thumb, we would expect a sell-off to be ongoing until the next “node”, unless the tension is released by some form of  agreement, which we still believe will come at some point in the coming months. In the absence of any deal, market stress is likely to steadily increase ahead of large Greek bond redemptions, in particular those in late July, with a calendar pretty similar to that of 2015. But while we expected at the time that a solution would have come very late in the game (in July, precisely), this time the base case scenario is for a quicker resolution.

Here are the five possible scenarios from the Swiss bank:

The Greek government is reportedly trying to find an agreement, providing a series of measures that should be largely compliant with the creditors’ requests and are crafted in a way that should be sufficient to convince the IMF to agree to continued participation in the programme. There is a key IMF meeting on 6 February: if the measures are accepted then it should open the way for a successful completion of the review on 20 February by the Eurogroup. This, in our view, would also set in motion a clarification of the medium-term relief measures (after 2018) to be granted, conditionally, to Greece. And from there the Debt Sustainability Analysis of both the IMF and the ECB should reinforce Greece’s position and allow the European Central Bank to include GGBs in its QE program.

That is clearly the positive scenario – and the most optimistic in the timing (e.g., it might still happen as above, broadly speaking, but delayed by a few days or weeks, clearly) – but we still think it can happen, with a decent probability. This would lead in all likelihood to a prompt reversal of the spread widening seen in recent weeks, and to further convergence ahead – especially if and when the participation of GGBs in ECB’s QE is announced.

The other four (less positive to outright negative) scenarios are discussed overleaf.

There is a fundamental “irreconcilable trinity” between the views of the IMF, that of European creditors and those of the Greek government: at the cost of oversimplifying, Greeks want less reform, more debt relief, and would prefer a lower primary surplus target; the IMF would like more structural reforms, more debt relief from European creditors, and lower primary surpluses – expecting Greece to deliver primary surpluses at 3.5% of GDP for the foreseeable future is seen as unrealistic; finally, European creditors are relatively agnostic on reforms, want ideally as little debt relief as possible, and prefer higher primary surpluses to fill the debt sustainability gap. It is not clear that these differences can be resolved, effortlessly, in a short period of time – it might still require a further layer of negotiations and developments. Still, there is some kind of “political imperative”, we believe, with indeed the preference by all to close the negotiations ahead of at least the French elections, in order not to poison further the European political debate. As such, a decision might eventually be pushed through next month or in April, at the latest, if disagreements are not too extreme.

This scenario would mimic the events of 2015, when the confrontation was pushed to the limit of default from the Greek side, in the hope of getting the best possible deal. In our view, that strategy didn’t work for Greece and created uncertainty and another recession in that year. As such, we struggle to see this strategy as intentional this time – but it could end up being the default option in the absence of an agreement under scenarios 1 and 2 and in the context of elections and events in the rest of Europe diverting the focus on Greek matters.

Early elections cannot be discarded, if a satisfactory agreement is not found in the coming two to three months. It is likely that most MPs dislike this option, as early elections would likely see several in the majority losing their seats: current polls suggest a very strong preference for the center-right opposition (New Democracy), as we show in Figure 6. However, it would be a way to preserve an “anti-system”  role to the ruling party, Syriza, with the aim and hope to return in government at a (not too) later stage, in a new election round. From a market perspective, early elections would clearly be a negative, short term, but we also stress that the likely victory of the centre-right would be probably seen as a positive medium-term outcome.

SYRIZA parliamentary spokesman Nikos Xydakis said earlier this week that a debate about Greece’s membership of the euro should not be taboo, seemingly reopening the discussion on Greece’s EU membership. We have debated this issue at length in the past, and believe it wouldn’t make sense for Greece to leave – and actually it is already damaging for the country to even discuss it. The opposition was quick in criticising Mr Xydakis and there is clearly no support in the parliament for it and even less so in the country (Figure 7).

Finally, here is a timeline of next events:

Below, we provide a timeline of key relevant dates and events in the coming months. There is an immediate set of events (in February) that could resolve the issues and make the programme progress swiftly. If not in February, there are several intermediate dates that could still deliver an agreement, although at a later stage, most likely around the scheduled Eurogroup meetings – although an extraordinary gathering to approve the bailout happened in the past and cannot be discarded. July 17 – or 20 – would be the “hard” deadline, as Greece would be, same as in July 2015, unable to repay those amounts without additional support under the EU/IMF programme. There are earlier relatively large redemptions, notably in late February and in April – but we believe there is probably room in Greece’s public finances  to fulfill those commitments.

Written By
Other Writer
More from Other Writer
Presidential candidates Donald Trump and Bernie Sanders, with a phalanx of lawmakers...
Read More

0 replies on “Zero Hedge: With The Greek Crisis Back, There Are Five Possible Scenarios From Here”