According to Alan Greenspan in a speech delivered at Stanford University in September 1997, monetary policy in the United States had been shed of M1 by late 1982. The Fed has never been explicit about exactly when, or even why, monetary policy changed dramatically in the 1980’s to a regime of pure interest rate targeting of the federal funds rate. In those days, transparency was no virtue but rather it was widely believed hindered policy as central banks were though better of who made the least imprint on markets. This speech in the later 1990’s confirmed what many had suspected, that the revolution in the policy regime was earlier on in that decade.

But if M2 came to be more useful at the expense of M1 in setting a federal funds target, by the end of the 1980’s and into the early 1990’s M2 encountered a similar fate. As Chairman Greenspan admitted to his Stanford audience, “By 1993, this extraordinary velocity behavior had become so pronounced that the Federal Reserve was forced to begin disregarding the signals M2 was sending, at least for the time being.” Because monetary evolution had by them become so pronounced, monetary policy by necessity, he said, was forced to become more and more discretionary.

And it was exactly this discretion which won Greenspan his reputation. For the Great “Moderation”, as it was later called, has been largely given in his image. The way he tells it, officials had no other choice:

Increasingly since 1982 we have been setting the funds rate directly in response to a wide variety of factors and forecasts. We recognize that, in fixing the short-term rate, we lose much of the information on the balance of money supply and demand that changing market rates afford, but for the moment we see no alternative. In the current state of our knowledge, money demand has become too difficult to predict.

Though the Fed could no longer get money right, it seemed as if it had been proficient at using everything else. When Greenspan finally stepped down in 2006, he was as celebrated as any central banker in history, though not cleanly or universally so. There were those small matters of asset bubbles as well as troubling indications about productivity. Still, by and large, Greenspan’s Fed set the standard for textbook monetary policy in what was believed just shy of perfection (despite the fact that nobody was really sure why).

Most of that policy centered on inflation, which had come to define price stability. In specific terms, 2% was felt as sufficient cushion for monetary policy to operate with enough flexibility between inflation and deflation; the former being undesirable by example of the 1970’s; the latter being the ultimate of all evil, by example of the 1930’s. The defining mantra for monetary policy is that it is better to have 2% inflation than risk 1933.

But how does one get 2% inflation? In truth, by Greenspan’s own words, and not just those of this one speech, they didn’t really know. FOMC deliberations no longer tied to money meant considerations about a great deal of economic as well as financial indications and prices. It was a “best judgment” regime, where policymakers determined well in advance when pressures, either toward inflation or its opposite, were detected. The decade of the 1990’s was characterized by these quarter-point adjustments in the federal funds rate, both up as well as down. Because of the low variability in output as well as consumer prices, it was just assumed those federal funds tweaks were ultimately responsible.

Though the Fed never during this whole time specified an inflation target, officials decided one was never needed because this presumption of credibility was more than enough. As Frederic Mishkin would write in 2004:

The main argument for the Federal Reserve’s pre-emptive monetary policy strategy, which I like to call the ‘just do it’ approach, is simply its demonstrated success.

Though it amounts to circular logic (inflation is low because of monetary policy’s success, and monetary policy is a success because inflation is low) there was still a great deal of evidence for this deduction. Inflation, in particular, seemed to have become very stable when throughout most of our nation’s history, and much of the world’s modern history, it had been anything but. With whatever crude measures of inflation expectations, the middle 1990’s to the middle 2000’s was a period of exceptional “anchoring.” 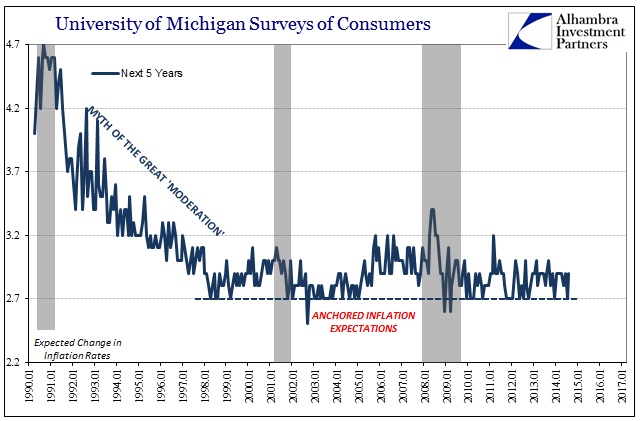 That longer run anchor was widespread market and economy belief that the Fed would fix any problems in whichever direction with the utmost of care and proficiency. Even during the worst of the Great “Recession”, inflation anchors like the UofM Survey or the 5-year/5-year forward inflation rate would only deviate for the shortest of periods. No matter how insufficient the fruits of monetary policy would be, starting in 2007, for years afterward there was every indication that Mishkin’s “demonstrated success” still ruled expectations.

Until the “rising dollar”, that is. 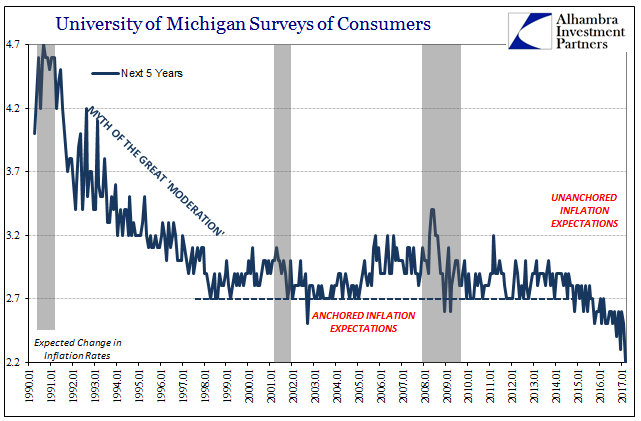 It wasn’t just the oil price crash that is responsible for this re-evaluation; after all, oil prices have crashed on several occasions during the “anchored” period noted above, including the Asian flu episode of the late 1990’s. The difference then versus now is obvious, for that was the height of Greenspan’s assumed prowess as well as what was really going on – the eurodollar’s uninterrupted and uninterruptable ascent.

It was never monetary policy that created the Great “Moderation”, and outside of the narrow confines of orthodox definitions that period was never so moderate to begin with. As the eurodollar system built up, it only appeared that way because output was stable so long as what was hidden far out of view remained drastically immoderate. Now that is no longer the case, where the eurodollar system reverses, decays, and acts as an anchor upon global output, there is no stability anywhere. Suddenly exogenous shocks (like “global turmoil”) are the rule rather than the exception where even the US economy is concerned.

Because nobody had any idea what the eurodollar even was, very few had ever heard of it (and not many more today have), it was just assumed that what had happened then was the product of skillful monetary policy and, as later confused scholars would claim, plain “good luck.” It was never luck but rather money that didn’t fall under the narrow orthodox definitions, as well as inflation (asset) that didn’t, either. Greenspan and his acolytes would have us believe that the Fed got everything right even though for twenty-five years they really had no idea exactly how.

The events of the “rising dollar” period seem to have been a final straw, that every benefit of the doubt wrongly assumed about the Fed and other global central banks had lastly been stripped from shared belief. Small wonder, too, since it was 2014 when predictions and reality so greatly diverged; Janet Yellen’s Fed was more worried about “overheating” and positive inflationary forces that proved in very short order to be ridiculously wrong (for the nth time). 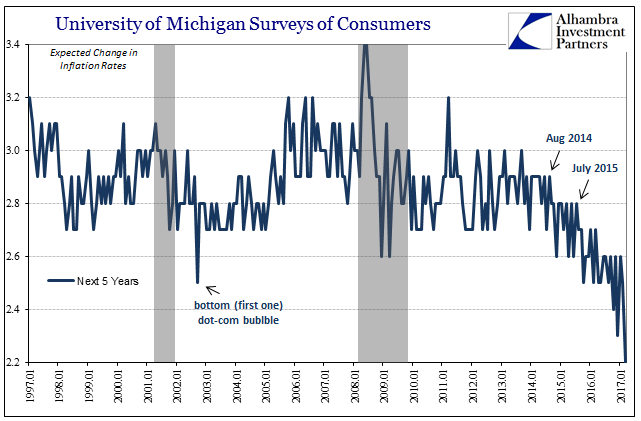 None of this is strictly devoted to just inflation expectations or even inflation itself. Consumer prices are the monetary junction between money and economy. The shedding of the so-called inflation anchor (which can be observed in financial curves, too) is as much a commentary on economy and therefore the reversal of the Greenspan aura. It is a conclusion that the people seem to have arrived at several years in advance of policymakers. 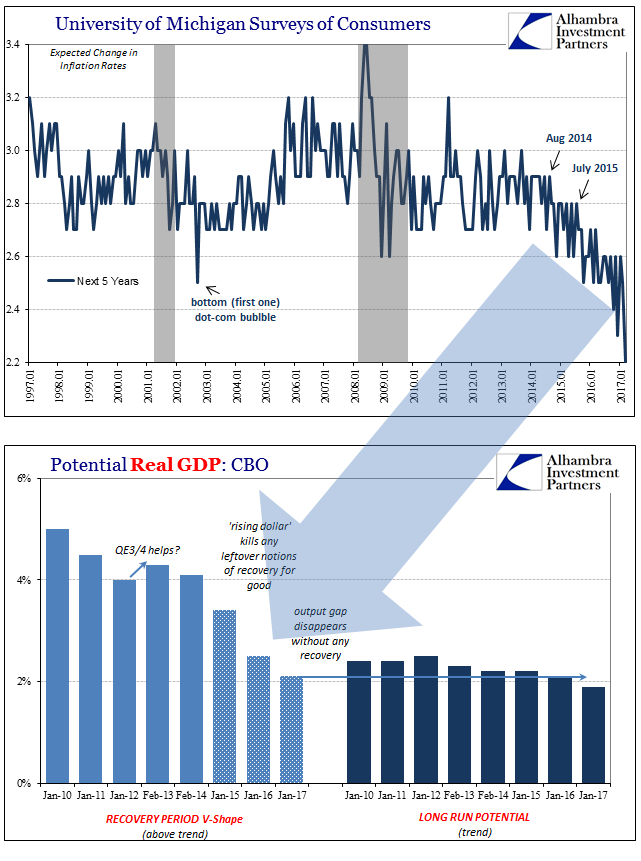 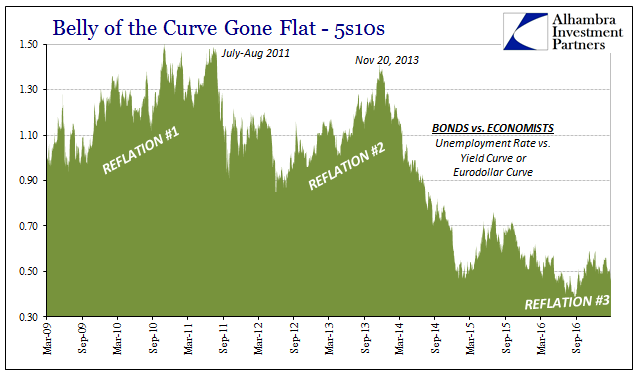 And in that way, the public’s economic expectations have actually been resynchronized with the Fed’s as it considers now a closed output gap despite no recovery from the worst economic condition since the Great Depression. Both now believe that the economy is terrible, is very likely to stay that way, and most importantly there is nothing the Fed can or will do to change it.

But the Great “Moderation” was more than an academic mischaracterization of what had happened. It was an overestimation of what monetary policy had achieved, and therefore what monetary policy could achieve or could even do on a technical level (the role of bank reserves is very different in the savings industry than in the shadows). I noted last week as on uncountable prior occasions this enormous disparity laid bare at least in the middle 2000’s when Alan Greenspan’s last major act as Fed Chairman was to “tighten” monetary policy without any such effect being felt anywhere. The most powerful and well-regarded central banker since Bagehot could not despite 17 rate hikes affect anything other than the nominal frame of reference of those rate hikes. 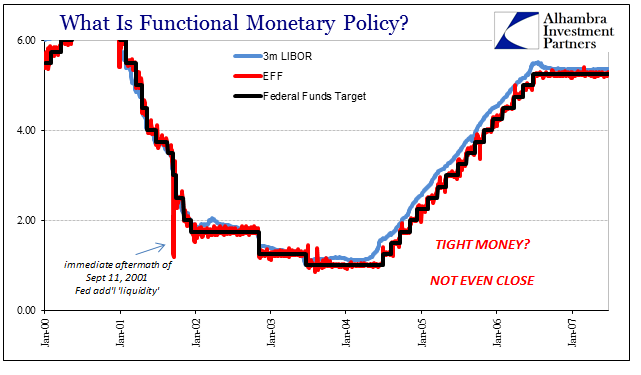 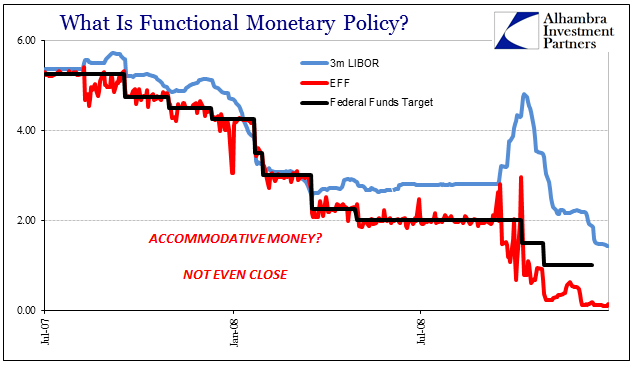 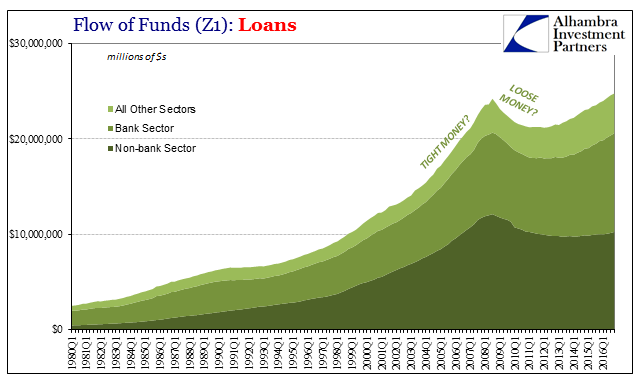 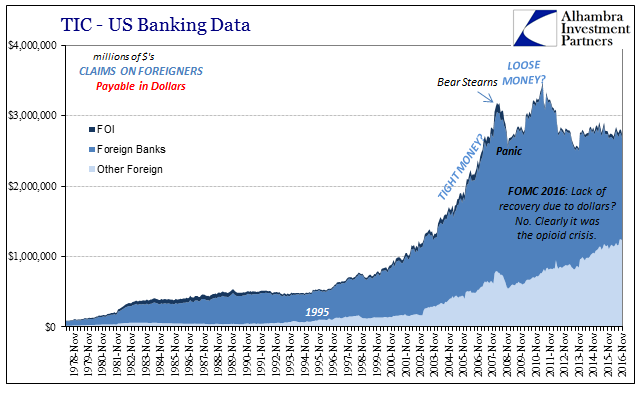 Myths often die hard, a long and painful period of emotion more than rational analysis. The legend of the Fed should have been removed as soon as, almost exactly ten years ago, Ben Bernanke said the words “subprime” and “contained.” Even if you wished to give the Fed and its discretionary monetary policy a mulligan for its actions during the most consequential period in postwar economic history, the fairytale should have been re-evaluated in full at least with that second QE (if you need to do it again, the first didn’t work and therefore in all likelihood the concept if not the whole paradigm was flawed).

It’s a truly amazing tale, which is one reason why very few choose to consider it even a possibility (especially by those in the media, who have been duped more than any others). For decades, the man so celebrated by all (at least most) the “experts” had no idea what he was doing? That US monetary policy had for all this time included little or no understanding and appreciation of money? It is almost too hard to believe; almost. It has taken some time, but with one lost decade already in the books, the Great “Moderation” starts to seem a very different thing, and the man who supposedly made it looks more and more to be the only one who was ever lucky.

Written By
Other Writer
More from Other Writer
Source: http://davidstockmanscontracorner.com/the-warmongers-brawl-how-the-gop-is-deserting-free-markets-sound-money-and-fiscal-rectitude/ According to Dante’s Divine Comedy the inscription on the gates...
Read More

One reply on “Jeffrey P. Snider: Further Unanchoring Is Not Strictly About Inflation”