In what was the clearest sign to date that the Fed is targeting the stock market bubble with its rate hikes (recall two weeks ago Goldman caused a stir when it suggested that the Fed had made a policy error by being overly dovish with its rate hike, which instead of tightening financial conditions, had the effect of a 25bps rate cut), today not one but two Fed presidents warned that the market is getting “a little rich“, that “valuations may be a little frothy”, and that the record “wealth to income ratio is a reason to keep raising rates.”

First, it was Boston Fed president Eric Rosengren who during an interview with Bloomberg, said some asset markets are “a little rich”, with an emphasis on commercial real-estate valuations, which he said are “pretty ebullient.” And while the Boston Fed president repeated what Neel Kashkari told Zero Hedge last week, when he said that “stock market values aren’t a driving force for monetary policy”, he made it quite clear that one of the reasons why the Fed is pushing with as many as 4 rate hikes in 2017 is precisely to push stocks lower, saying that “rich asset prices are another reason for the central bank to tighten faster.”

Achieving the gradual deflating of asset prices would likely require more rate hikes than the market is currently pricing in, and Rosengren hinted as much when he said that four hikes in 2017 may be needed to guard against economic overheating,

Then, it was San Fran Fed President John Williams’s turn, double down on the caution saying stock market valuations “may be a little frothy in that way, and come down” on fiscal policy disappointment.

Suggesting that the market is overvalued, Williams told reporters during a Q&A in New York that “I do think that the market’s perceptions of what’s going to happen … kind of got ahead of reality” on fiscal policy. Williams also echoed Rosengren saying he “would not rule out more than three increases total for this year.” The median estimate of Fed officials in their mid-March forecasts was for three quarter-point rate increases in 2017.

Williams also warned those who are confident that the Fed will not sell Treasuries saying that the Fed can begin shrinking balance sheet before knowing size it should ultimately be: “We could start a normalization of the balance sheet and then make a decision, do we stop at X or Y.”

“I think the floor system has been effective” for controlling short-term interest rates and it’s “not that critical” which one Fed uses in the future because it has shown it can control rates with both floor and corridor systems.

In effect what the Fed is hoping to do is to avoid a flattening or even inversion of the yield curve by pushing short rates higher while selling long-dated treasuries, in effect prompting an even more aggressive selling in the long-dated part of the curve, in effect undertaking a parallel curve shift, or even one where the curve steepens further. As a reminder, this is something the BOJ is currently attempting with its “Yield Curve Control” program.

That said, “we’re not at that point yet” where we can communicate what size we think it will be in the end.

But while Williams emphasized the it is the strong economy that gives him confidence that the US can sustain 3 or more rate hikes in 2017, which is surprising because as we have repeatedly shown, the bulk of the economic improvement has been only as a result of sentiment and confidence surveys… 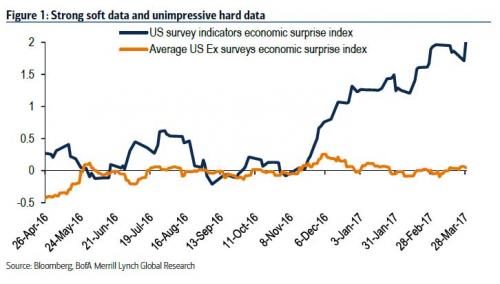 … and not in terms of actual hard data, Williams let the real reason for the Fed’s sudden rush to hike rates slip when he said that the “growing wealth-to-income ratio is another reason to keep raising rates.”

Williams was referring to the following chart we showed three weeks ago: 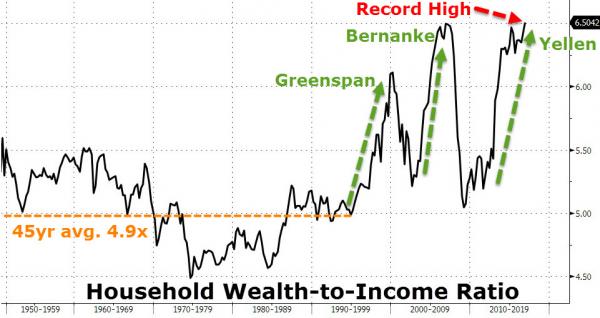 … a chart which clearly shows that at least when looked at on a “wealth-to-income” ratio – which now is at an all time high – assets are above the peak-bubble levels that marked both the Greenspan and Bernanke peaks.

So is the Fed suddenly, finally, worried about the consequences of its bubble-reflating actions over the past 8 years? If so, good luck trying to put that particular genie back in the bottle, and “deflate” risk assets in a calm, cool and collected manner. In any case, if indeed the Fed is hoping to orchestrate a market drop, it will be a useful and timely test of Kashkari’s statement from last week, when the Fed president said a “stock market drop unlikely to trigger crisis.”

Written By
Other Writer
More from Other Writer
Money supply growth surged to another all-time high in May, following April’s...
Read More