“Remember what has happened. In an unnecessary referendum, a small majority chose an option they could not understand, because it had not been worked out.. The UK has become so ludicrous because the issue of the EU is so deeply felt by a significant part of the body politic. The Brexiters are the Jacobins of UK politics. Their ideological intensity has devastated the Conservative party and reduced British politics to its present shambles. There is, as a result, neither a comfortable exit from Brexit nor a plausible way of managing it smoothly. Whom the gods wish to destroy they first make mad. So it now is over Brexit.”

“Pity the BBC’s attempts to deliver objective and neutral coverage of a politicised issue such as the British referendum on leaving the EU.”

It is difficult to buy what is popular and do well. Fortune Magazine, for example, published a now notorious article on 14 August 2000 entitled ‘Ten Stocks to Last the Decade’. The Fortune list contained the following stocks:

The bloom had already started to come off the dotcom rose by August 2000 (the Nasdaq peaked in March of that year), but that didn’t stop Fortune from loading their list with technology, media and telecoms stocks. How did they fare ?

The Fortune portfolio lost 65% of its value over the subsequent decade. Three of the companies on the list went bankrupt and a fourth, Genentech, was taken over. 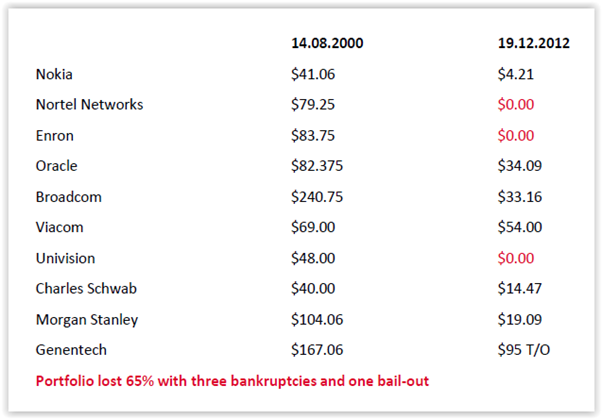 Again, it is difficult to buy what is popular and do well.

Investors in the early 1970s committed the same mistake when they plumped for the so-called ‘Nifty Fifty’. As did those of the late 1990s when they favoured internet stocks over just about anything else. Today’s ‘Nifty Fifty’ are the so-called FANGs – Facebook, Amazon, Apple (?), Netflix and Google (for example). More and more money is chasing fewer and fewer stocks. Market breadth has more or less evaporated, helped into the ether by the popularity of low cost tracker funds, which can be described as many things, but ‘discerning’ doesn’t happen to be one of them.

At the same time, we have a market where price discovery is a farce because the central banks are sitting on the scales. Bonds are uninvestible, and it isn’t just the FANGs that are expensive – QE and ZIRP have both triggered a Gadarene flood of money into listed equities as the last remaining game in town.

As the sheriff sardonically observes in No Country For Old Men, if it ain’t a mess, it’ll do till the mess gets here.

But we are not paid simply to acknowledge messes. What, then, is today’s rational investor to do ?

The first step in dealing with any problem is acknowledging it. If we accept that most asset classes are overvalued, the obvious response is not to own them in the first place.

The next step is to diversify sensibly among what’s left. In our world, that includes objectively high quality stocks not trading at an obvious premium to their inherent worth. Our favourite markets for value opportunities include those of Japan and Vietnam. We also see diversification benefits in systematic trend-following funds, and real assets, notably the monetary metals. If and when the current economic malaise morphs into deflation, the next iteration of QE is going to blow the doors off. So an element of inflation hedging and, more to the point, crisis hedging is essential.

The problem – if you can call it that – with diversification is that it’s not tremendously sexy. As Ben Hunt rightly observes,

Diversification isn’t a pretty bird. Diversification doesn’t make my heart skip a beat like a flock of goldfinches in July. Diversification, by design, is going to have winners and losers simultaneously. Diversification, by design, is never going to look pretty doing its job, because if your portfolio is all working in unison, swooping through the market in a beautiful glint of gold … well, you may be making money, but you sure aren’t diversified. Diversification is undeniably effective, but it’s effective like a rat is effective, wonderfully adapted to do pretty well in pretty much any possible environment without calling too much attention to itself. That’s actually one of the rat’s primary survival mechanisms. It’s not flashy. It’s not pretty. It’s a freakin’ rat.

Diversification doesn’t make us feel good like a winning value or growth investment makes us feel good, and as Maya Angelou so brilliantly said, how you make people feel is ALL they remember.

I don’t have an answer for the simple fact that diversification doesn’t sing. I can’t make a financial advisor’s client feel good about diversification. I wish I could, because I would be … umm … a very rich man. But what I do know is that it’s a mistake to gussie up diversification as something that it isn’t. You can’t sell diversification as a beautiful song bird. You have to be honest about what diversification can and can’t do, not just for a portfolio’s performance, but also for a portfolio’s experience. The more years I spend in this business, the more I am convinced that how one lives with a portfolio, how one experiences its ups and downs over time, is more important for business success and business staying power than that portfolio’s performance. And I’m not just talking about volatility, which is usually how we think about the path of a portfolio and its ups and downs. No, I’m talking about how a portfolio makes us feel. Most of us need those goldfinch moments of wonder and awe, even if they just last for a season, to feel good about our portfolios, and those are moments that diversification has a really hard time delivering.

To every thing there is a season, and a time to every purpose under heaven. That holds for portfolio construction, too.

If it’s difficult to buy what is popular and do well, it’s sometimes even more difficult to buy what is unpopular, even though the chances of ultimate success (or the avoidance of catastrophic loss) may be demonstrably higher. But given the challenges we all face investing in a parody of free markets, buying the unpopular is probably the right thing to be doing as well.

Written By
Tim Price
More from Tim Price
“Darling.. So No. 3 Commando were very anxious to be chums with...
Read More

One reply on “Popularity is overrated”