If you invest your money, you will have to deal with numerous risks. For instance, if you buy a bond, you run the risk of the borrower defaulting or being repaid with debased money. As a stock investor, you face the risk that the company’s business model will not live up to expectations, or that it, at the extreme, will go bankrupt. In an unhampered financial market, prices are formed for these and other risk factors.

For instance, a bond with a high default risk will typically carry a high yield. The same goes for debt denominated in an unsound currency. Stocks of companies that are deemed risky tend to trade at a lower valuation level than those considered low risk. All these risk premiums, if determined in the unhampered market, constitute a portion of an asset’s price, be it a bond or a share. They play a vital role in the way capital is allocated in an economy.

Risk premiums are meant to compensate investors for the risk of losses resulting from adverse developments. If you buy a stock at a depressed price relative to the firm’s earnings power, it tends to reduce your downside (while offering the chance of great gains). At the same time, risk premiums increase investors’ cost of capital. This, in turn, discourages them from engaging in overly risky investments. 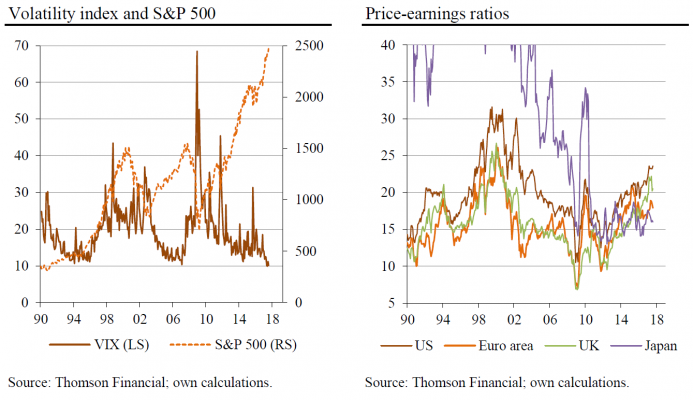 In other words, risk premiums determined in an unhampered market align the interests of savers and investors. Of course, one cannot be sure that ex ante risk premiums are always correct. Sometimes it turns out that risks were overestimated, sometimes they were underestimated. However, the unhampered market is still the best and most efficient means to determine the price of risk.

Central banks, however, interfere and corrupt the best practice of the formation of the price of risk. In the last financial and economic crisis, central banks had lowered interest rates to unprecedented low levels and ramped up the quantity of (base) money to keep financially ailing governments and banks afloat and the economy going. In fact, they effectively put out a ‘safety net’, providing insurance to financial markets against potential systemic losses. 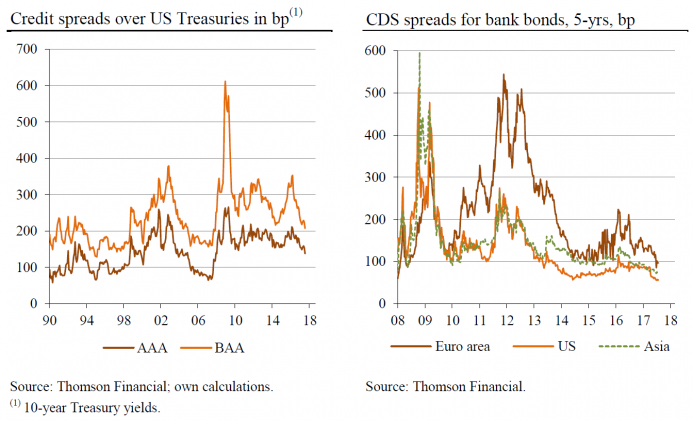 By doing so, central banks have put investor risk aversion to sleep: Under their guidance, financial markets are now betting on, and have high confidence in, monetary policy makers successfully fending off any new problems in the economic and financial system. This seems to be the message the price action in financial markets is conveying to us. For instance, stock price fluctuations have returned to very low levels, accompanied by strong stock market gains and high valuations.

The yield spread of risky corporate bonds over US Treasuries has returned to levels last seen in early 2008. Or look at the prices for credit default insurance for bank bonds. They also have returned to pre-crisis levels, suggesting investor credit concerns have markedly declined. In other words, investors are back again, eagerly taking on additional credit risk and willingly financing corporates’ investments at suppressed costs of capital.

Central banks have thus not only artificially reduced interest rates by lowering credit costs, they have also artificially reduced risk premiums by (explicitly or implicitly) signaling to the financial markets that they are prepared to basically ‘do whatever it takes’ to prevent another meltdown as witnessed in 2008/2009. The consequence is that financial markets and economies depend on central bank action more than ever before.

There is no easy way out of this situation. If interest rates go up — be it through rate hikes or the elimination of the ‘safety net’ — the current recovery will most likely come to a halt, if it does not turn into a bust straight away: With higher interest rates, the economic structure, built on artificially low interest rates, would run into serious trouble. The idea of central banks ‘normalizing’ interest rates without output losses or even a recession appears illusionary at best.

Against this backdrop, it is interesting to see that, for instance, the US Federal Reserve and the European Central Bank (ECB) may want to bring short-term interest rates back up (further). At the same time, however, there is no evidence that monetary policymakers have any plans to remove the ‘safety net’ that has so successfully brought down risk premiums in asset markets and thus the cost of capital.

That said, even an increase of central banks’ short-term funding will not bring about a normalization of the cost of capital — as risk premiums will most likely remain artificially suppressed. Capital misallocation will continue and the artificial boom is kept alive and well. Investors, therefore, face quite a challenge: Malinvestments continue, and downside risks increase, while it might be too early to jump ship.

Via Cheques are to be abolished – Telegraph: The Payments Council Board has agreed to set a target date of 31st October 2018 to…