“Think of how stupid the average person is, and realize half of them are stupider than that.”

If investors were rational, they would choose their investments on the basis of valuation. Cheap assets good, expensive assets bad. Markets are tricky things and tough to beat or even match, so it helps to have an edge. No other characteristic has more bearing on the likelihood of an investment’s long term success than its starting valuation. That tiny word “if” carries an awful lot of freight, though. The reality for many is that, consciously or otherwise, they favour financial assets that have self-evidently “worked”, in that their prices have risen strongly in the recent past. Human beings are nothing if not straightforward extrapolation engines. This is not to denigrate price momentum, which is a perfectly respectable trading strategy, but it is to denigrate the animal spirits of the average investor, who has an unerring tendency to conduct investment strategy by way of the rear view mirror.

In their latest white paper for GMO, Matt Kadnar and James Montier lay out the facts, and they don’t make pleasant reading for “investors” surfing the rising tide of the US stock market. Messrs Kadnar and Montier, being scientifically inclined, commit a modern heresy: they don’t deploy hope; they deploy mathematics.

Their first graph, Exhibit 1, shows the composition of returns from the S&P 500 stock index over the last 45 years or so: 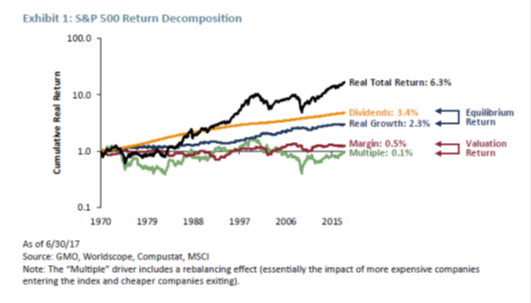 Capital growth was next, accounting for 2.3% of the return. 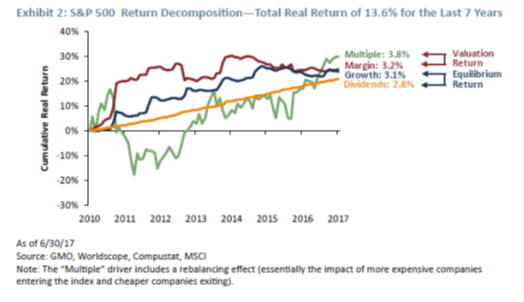 What’s “different this time” is the make-up of that (far higher) average annual real return of 13.6%.

Dividends, normally key, lag at the rear for the period, accounting for just 2.8% of the return.

Multiple expansion has been the single biggest driver of recent market returns, accounting for an annualised 3.8%.

Could it be that the (hitherto unidentified) spectres at this feast have been QE and ZIRP ? The most aggressive monetary stimulus in history and the reduction of policy interest rates to zero might plausibly account for why “investors” have bid up market earnings multiples in a Gadarene scramble for returns. In a zero interest rate world, stocks perceived to offer capital growth trade at an inevitable premium.

And then Messrs Kadnar and Montier gently insert a pin into the bubble.

They construct a 7 year forecast on the hardly outrageous basis of mean reversion. (If you don’t believe that markets tend to revert to the mean over time, you can skip the rest of this letter and go back to your crack pipe.)

Those forecasts look as follows: 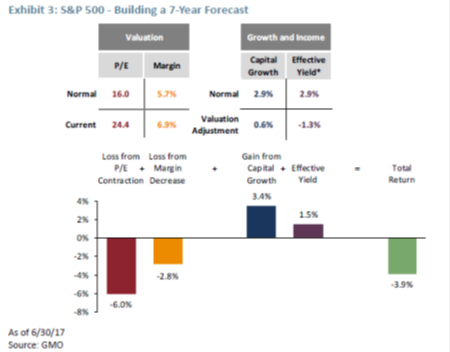 If – again, a heavily loaded “if” – GMO’s forecasts of mean reversion turn out to be justified by future events, or gravity, or other forces of nature allied to straightforward mathematics, then S&P 500 “investors” are in for real annualised losses of 3.9% for the next 7 years. These forecasts may prove pessimistic, or they may actually overstate future returns. Those “investors” with $240 billion just in the SPDR S&P 500 ETF will clearly be interested in the ultimate accuracy of GMO’s forecast.

Kadnar and Montier then run Benjamin Graham’s ‘deep value’ equity screen for two periods: November 2008, and today. The results are shown below. 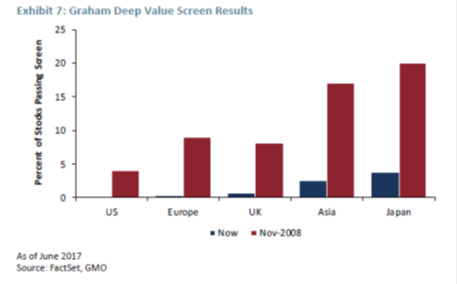 In late 2008, the global stock markets were awash with value opportunities.

Today, the most conspicuous ‘deep value’ opportunities are in Asia, and especially in Japan.

Today, not one single stock in the US market qualifies.

Given that we are Benjamin Graham-style investors, it should not come as too much of a surprise to learn that our one and only fund, the VT Price Value Portfolio, has over 50% of its holdings in Asia, with the single largest country representation being in Japan. As at end July 2017, from inception in June 2015, the fund had generated a GBP return of just over 33%. We continue to believe that in a world generally afflicted by overvaluation, it makes most sense to own the shares of quality businesses that are not trading at any obvious premium to the market.

0 replies on “Maths versus magic”