Leading Federal Reserve policymaker Stanley Fischer has hit out at plans to unwind banking regulation, calling it a “terrible mistake.”

President Donald Trump and republican politicians have advocated the repeal of Dodd Frank, a major piece of post-crisis legislation, and the loosening of some capital and liquidity requirements in a bid to ease banks’ ability to lend.

In an interview with the Financial Times on August 16 2017, Fischer said that loosening capital and liquidity requirements is dangerous and could lead to a new economic crisis. “I find that really, extremely dangerous and extremely short-sighted.”

Whilst Fischer is not a friend of a free market, in this case we are in agreement with Fischer’s comment.

The proponents for less control in financial markets hold that fewer restrictions imply a better use of scarce resources, which leads to the generation of more real wealth.

It is true that a free financial environment is an agent of wealth promotion through the efficient use of scarce real resources, whilst a controlled financial sector stifles the process of real wealth formation. The proponents of deregulated financial markets have overlooked the fact that the present financial system has nothing to do with a free market.  What we have at present is a financial system within the framework of the central bank, which promotes monetary inflation and the destruction of the process of real wealth generation through fractional reserve banking. In the present system the more unrestricted the banks are the more money out of “thin air” generated and hence greater damage inflicted upon the wealth generation process. (Note that in the genuine free banking i.e. the absence of the central bank, the potential for the creation of money out of “thin air” is minimal).

Prior to the 1980’s financial de-regulation, we had controlled banking where the central bank tightly supervised banks’ conduct. Within this type of environment, bank’s profit margins were nearly predetermined (the Fed imposed interest rate ceilings and controlled short-term interest rates) hence; the “life” of the banks was quite easy, although boring. The introduction of financial de-regulations and the dismantling of the Glass – Steagall Act changed all that. The de-regulated environment resulted in fierce competition between banks.

The previous profit margins came under pressure and this called for an increase in volumes of lending in order to maintain the level of profits. In the present central banking framework, this increase culminated in an explosion in the creation of credit out of “thin air” – (massive explosion in the money supply). (In the deregulated environment, banks’ ability to amplify Fed’s pumping has enormously increased). Note that the AMS to its trend ratio (the trend calculated from January 1959 to December 1979) hovered very closely at around 1.0 during 1959 to early 1980’s. Since early 1980’s this ratio has been rising visibly, climbing to 2.2 by October 2016 before closing at 2.1 in June 2017. 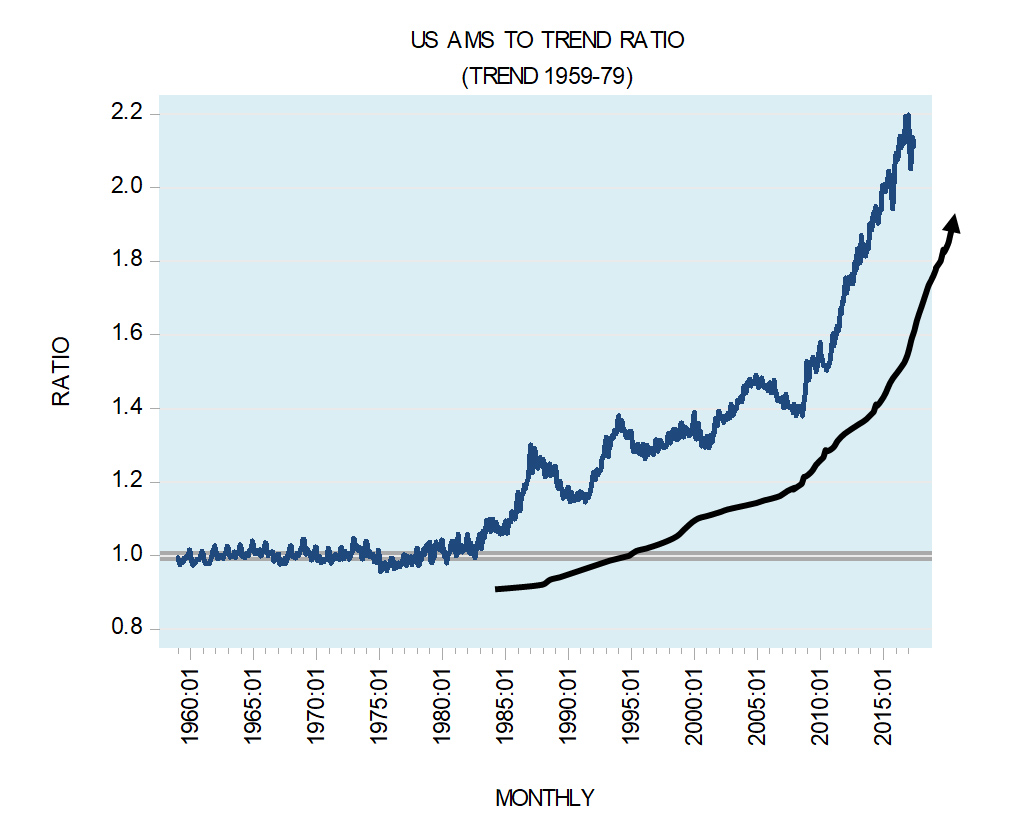 From this, it follows that in the present banking system what is required to reduce a further weakening of the real wealth generation process is to introduce tighter controls on banks.  Therefore, we are in complete agreement with Stanley Fischer to continue restrain banks’ ability to lend to prevent a further erosion in the pool of real savings.

Pay attention that we do not suggest here suppressing the free market but suppressing banks’ ability to generate credit out of “thin air”. Please note the present banking system has nothing to do with a true free market economy.

More controls will suppress banks’ ability to amplify the Fed’s pumping so in this sense it is preferable to a so-called deregulated banking sector.

Steve Baker has written an article for today’s City A.M. calling for an end to the ‘cruel delusion of cheap money and reckless spending‘:…