Writing, as government bond yields for peripheral European markets peaked in Macro Letter – No 73 – 24-03-2017 – Can a multi-speed European Union evolve? I felt that another Eurozone crisis could not be ruled out:-

The ECB would almost certainly like to taper its quantitative easing, especially in light of the current tightening by the US. It reduced its monthly purchases from Eur 80bln per month to Eur 60bln in December but financial markets only permitted Mr Draghi to escape unscathed because he extended the duration of the programme from March to December 2017. Further reductions in purchases may cause European government bond spreads to diverge dramatically. Since the beginning of the year 10yr BTPs have moved from 166bp over 10yr German Bunds to 2.11% – this spread has more than doubled since January 2016.

Was I simply wrong or just horribly premature, only time will tell? The December end of the asset purchase programme is growing inexorably closer. So far, however, despite a rise in the popularity of AfD in Germany, the Eurozone seems to have maintained its equanimity. The Euro has not weakened but strengthened, European growth has improved (to +2.3% in Q2) and European stock markets have risen. But, perhaps, the most interesting development has occurred in European bond markets. Even as the Federal Reserve has raised short term interest rates, announcing the beginning of balance sheet reduction, and the ECB has continued to prepare the markets for an end to QE, peripheral bonds in Europe have seen a substantial decline in yields: and their respective spreads against the core German Bund have narrowed even further. Is this a sign of a more cohesive Europe and can the trend continue? 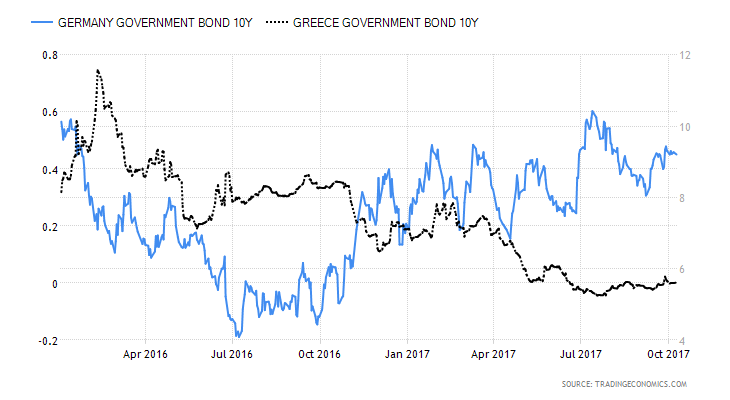 The table below looks at a selection of peripheral European markets together with the major international bond markets. Switzerland, which has the lowest 10yr yield of all, has been included for good measure. The table is arranged by change in yield:- 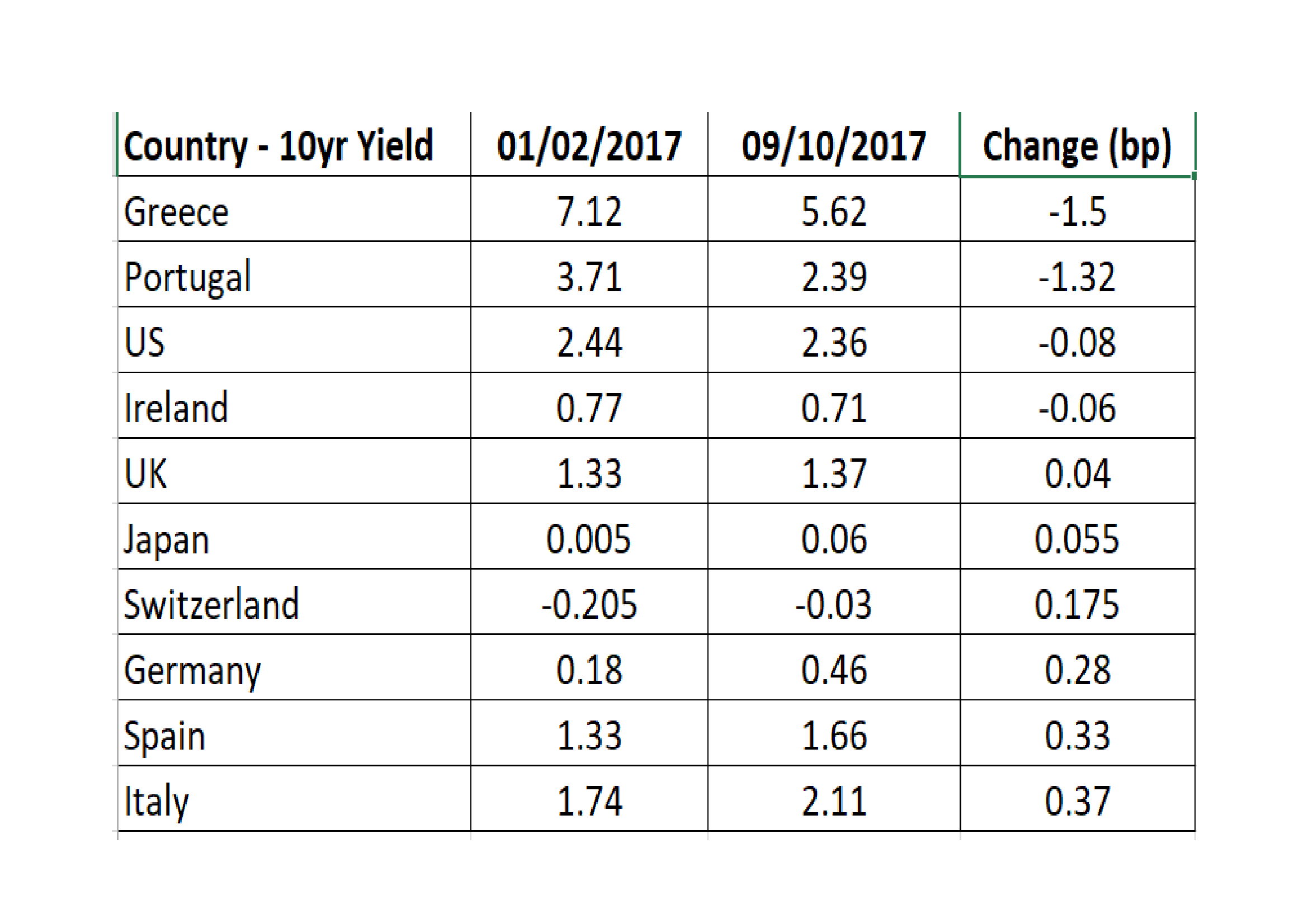 This year’s clear winners are Greece and Portugal – the latter was upgraded to ‘investment grade’ by S&P in September. It is interesting to note that despite its low absolute yield Irish Gilts have continued to converge towards Bunds, whilst BTPs and Bonos, which yield considerably more, have been tentatively unnerved by the prospect of an end to ECB largesse.

As an aside, the reluctance of the Bonos to narrow versus BTPs (it closed to 41bp on 4thOctober) even in the face of calls for Catalonian independence, appears to indicate a united Spain for some while yet. Don’t shoot the messenger I’m only telling you what the markets are saying; in matters of politics they can be as wrong as anyone.

Where now for European bonds?

A good place to start when attempted to divine where the European bond markets may be heading is by considering the outcome of the German election. Wolfgang Bauer of M&G Bond Vigilantes – Angela Merkel’s Pyrrhic victory – writing at the end of last month, prior to the Catalan vote, takes up the story:-

Populism is back with a vengeance

One of the most striking election results is certainly the strong performance of the right-wing nationalist AfD (12.6%). Not only is the party entering the German Bundestag for the first time but the AfD is going to become the third largest faction in parliament. If the grand coalition is continued – which can’t be ruled out entirely at this point – the AfD would de facto become the opposition leader. While this is certainly noteworthy, to say the least, the direct political implications are likely to be minimal. None of the other parties is going to form a coalition with them and AfD members of parliament are likely to be treated as political pariahs. We have seen this happening in German state parliaments many times before.

However, I think there might be two important indirect consequences of the AfD’s electoral success. First, within Germany the pressure on Merkel, not least from her own party, with regards to policy changes is going to build up. For obvious reasons, preventing the rise of a right-wing nationalist movement has been a central dogma in German politics. That’s out of the window now after the AfD’s double digits score last night – on Merkel’s watch. In the past, she has been willing to revise long-held positions (on nuclear power, the minimum wage, same sex marriage etc.) when she felt that sentiment amongst voters was shifting. In order to prise back votes from the AfD she might change tack again, possibly turning more conservative, with a stricter stance on migration, EU centralisation and so on.

Secondly, the success of the AfD at the ballot box might challenge the prevailing narrative, particularly since the Dutch and French elections, that anti-EU populism is on the decline. This could have implications for markets, which arguably have become somewhat complacent in this regard. The Euro, which has been going from strength to strength in recent months, might get under pressure. Compressed peripheral risk premiums for government and corporate bonds might widen again, considering that there are more political events on the horizon, namely the Catalan independence referendum as well as elections in Austria and Italy.

This sounds remarkably like my letter from March. Was it simply that I got my timing wrong or are we both out of kilter with the markets?

The chart below shows the steady decline in unemployment across Europe:- 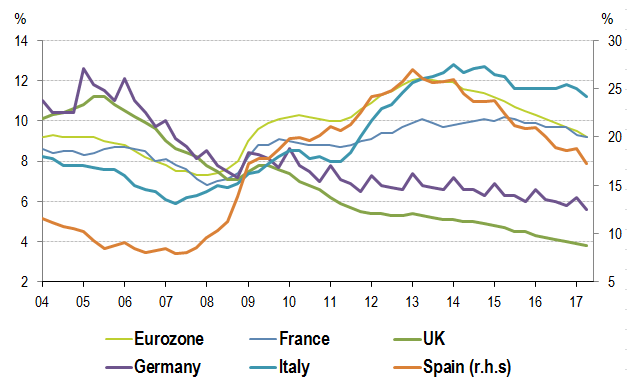 The rate of economic expansion in European is increasing and measures of the popularity of the Eurozone look robust. Nathalie Benatia of BNP Paribas – Yes, Europe is indeed backputs it like this:-

…take some time to look at this chart from the European Commission’s latest ‘Standard Eurobarometer’, which was released in July 2017 and is based on field surveys done two months earlier, just after the French presidential election, an event that shook the world (or, at least, the French government bond market). Suffice it to say that citizens of eurozone countries have never been so fond of the single currency. 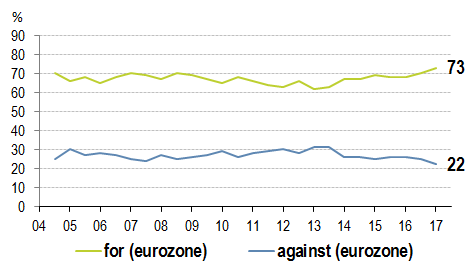 The political headwinds, which I clearly misjudged in March, are in favour of a continued convergence of Eurozone bonds. Italy and Spain offer some yield enhancement but Portugal and Greece, despite a spectacular performance year to date, still offer more value. The table below shows the yield for each market at the end of November 2009 (when European yield convergence was at its recent zenith) and the situation today. The final column shows the differential between the spreads:- 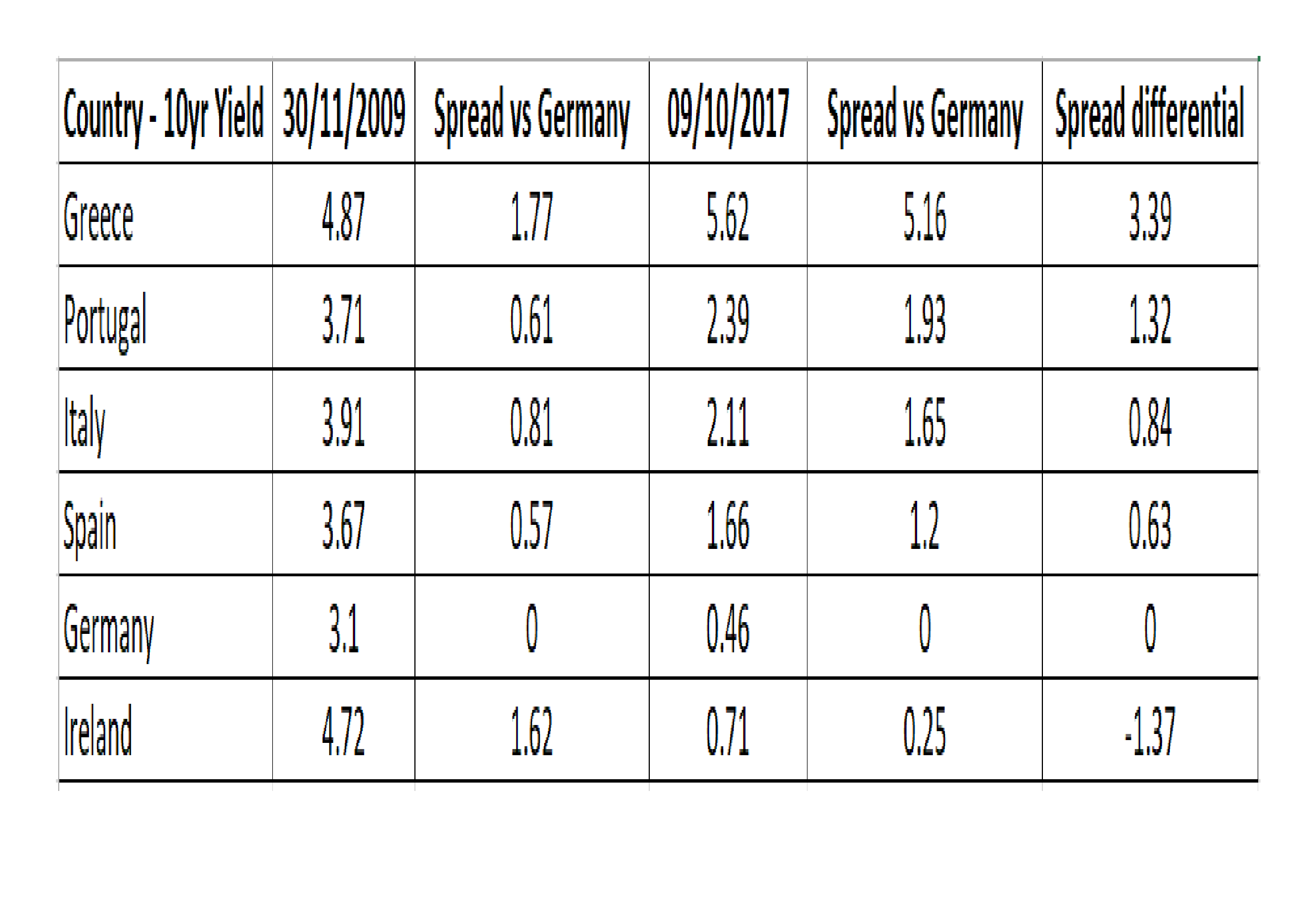 Only Irish Gilts look overpriced on this metric. Personally I do not believe the yield differentials exhibited in 2009 were justified: but the market has been proving me wrong since long before the introduction of the Euro in 1999. Some of you may remember my 1996 article on the difference between US municipal bond yields and pre-Euro government bond yields of those nations joining the Euro. I feared for the German tax payer then – I still do now.

I expect the yield on Bunds to slowly rise as the ECB follows the lead of the Federal Reserve, but this does not mean that higher yielding European bond markets will necessarily follow suit. I continue to look for opportunities to buy Bonos versus BTPs if the approach parity but I feel I have missed the best of the Greek convergence trade for this year. Hopes that the IMF will desist in their demands for continued austerity has buoyed Greek bonds for some while. The majority of this anticipated good news is probably already in the price. If you are long Greek bonds then Irish Gilts might offer a potential hedge against the return of a Eurozone crisis, although the differential in volatility between the two markets will make this an uncomfortable trade in the meanwhile.

Back in March I expected European bond yields to rise and spreads between the periphery and the core to widen, I certainly got that wrong. Now convergence is back in fashion, at least for the smaller markets, but Europe’s political will remains fragile. The party’s in full swing, but don’t be the last to leave.

Written By
Colin Lloyd
More from Colin Lloyd
US bond yields have risen from historic lows, they should rise further,...
Read More

0 replies on “European Bonds – warning knell or cause for celebration?”