In the third quarter of 2017, one in which the global economy was supposedly undergoing an unprecedented “coordinated growth spurt”, and in which central banks were preparing to unveil their QE tapering intentions, in the case of the ECB, or raising rates outright, at the Fed, what was really taking place was another central bank buying spree meant to boost confidence that things are now back to normal, using “money” freshly printed out of thin air, and spent to prop up risk assets around the world by recklessly buying stocks with no regard for price or cost.

Nowhere was this more obvious than in the latest, just released 13F from the massive hedge fund known as the “Swiss National Bank.” What it showed is that, just like in the prior quarter, and the quarter before that, and on, and on, the Swiss central bank had gone on another aggressive buying spree and following its record purchases in the first quarter, the central bank boosted its total holdings of US stocks to an all time high $87.8 billion, up 4.2% or $3.5 billion from the $84.3 billion at the end of the second first quarter. 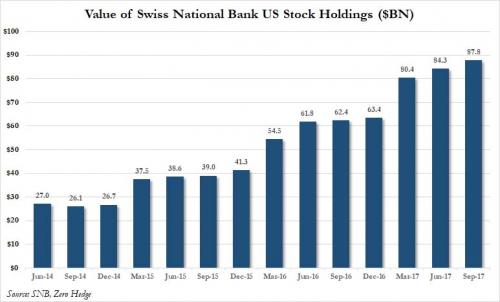 As reported earlier this week, as of Sept.30, the Swiss central bank had accumulated foreign exchange worth 760 billion francs (roughly the same in USD) due to its relentless open market interventions to depress the Swiss franc, and has “invested” those funds created out of thin air in both stocks and bonds. At the end of the second quarter, it held 20% in equities, of which the bulk was in US stocks.

While we are far beyond the point of debating central bank intervention in equity markets (we do want to remind readers that until several years ago, it was considered “fake news” to even mention it, and those who accused central bankers of manipulating stock markets were said to be paranoid tinfoil basement dwellers), we want to point out that unlike the BOJ, which at least keeps its capital markets distortion local, the SNB, which likewise creates money out of thin air (then sells it for dollars in an attempt to keep the Swiss franc depressed) is actively causing substantial price distortions in the US.

While we doubt this will be investigated with stocks are at all time highs, we look forward to the Congressional hearings after the crash when the scapegoating and fingerpointing begins as it always does, and everyone is “stunned” to learn that central banks were responsible for blowing the biggest asset bubble the world has ever seen by directly buying stocks.

What else did the SNB reveal in its 13F? Two main things.

First, its top 20 holdings are as shown in the following chart. The central bank was clearly not shy in adding to its top positions. 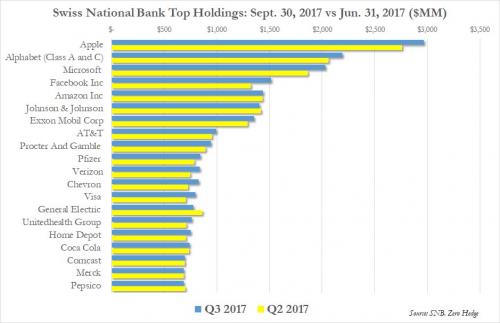 And while we have yet to learn if Warren Buffett was actively frontrunning the SNB once again during the quarter, by buying even more AAPL shares, a look at the SNB’s holdings of AAPL stock which again increased modestly to 19.2 million shares, making it a larger holder of AAPL stock than Schwab and Franklin Resources (with 18.3 and 17.0 million shares respectively), and just behind Janus with 20 million shares, shows one of the main reasons why the Nasdaq has until recently been hitting new all time highs on a daily basis. 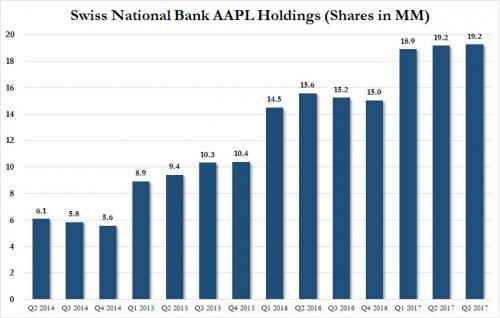 The chart above also explains why Goldman, despite warning of rising client worries about record low volatility and record high valuations, remains bullish on the Nasdaq 100: after all, when a central bank can and does create money out of thin air, then splurges on the handful of tech companies that have the biggest impact on the broader market, pushing both the Nasdaq and all indices higher, what is the point of even talking about “risk”?

Written By
Other Writer
More from Other Writer
By Weimin Chen This January has carried on the torch of 2020’s...
Read More

0 replies on “Zero Hedge: The Swiss National Bank Now Owns A Record $88 Billion In US Stocks”