As anyone who owns a house will tell you, all property markets are, ‘local.’ Location is key. Nonetheless, when looking for indicators of a change in sentiment with regard to asset prices in general, residential real estate lends support to equity bull markets. Whilst it usually follows the performance of the stock market, this time it may be a harbinger of austerity to come.

The most expensive real estate is to be found in areas of limited supply; as Mark Twain once quipped, when asked what asset one should invest in, he replied, ‘Buy land, they’re not making it anymore.’ Mega cities are a good example of this phenomenon. They are a sign of progress. As Ian Stewart of Deloittes put it in this week’s Monday Briefing – How distance survived the communication revolution:-

In 2014, for the first time, more of the world’s population, some 54%, lived in urban than rural areas. The UN forecasts this will rise to 66% by 2050. Businesses remain wedded to city locations. More of the UK’s top companies are headquartered in London than a generation ago. The lead that so-called mega cities, those with populations in excess of 10 million, such as Tokyo and Delhi, have over the rest of the country has increased.

Proximity matters, and for good reasons. Cities offer business a valuable shared pool of resources, particularly labour and infrastructure. Bringing large numbers of people and businesses together increase the chances of matching the right person with the right job. The scale of cities improves matching in other areas, from restaurants to education and the choice of a partner. Scale, in terms of the number of businesses, tend to stimulate competition and productivity.  Nor has technology fulfilled its promise to work equally well everywhere. By and large, technology tends to work better in urban areas than the country.

Urbanisation facilitates learning and the diffusion of knowledge, two vital processes for the modern economy. Workers in cities can more easily change jobs without changing homes, enabling the transfer of ideas across businesses. On-line learning has supplemented, but shows few signs of usurping the classroom, lecture theatre or face to face contact. Despite the collapsing cost of communication, competition for entry to the best schools and universities has intensified in the last three decades.

For all the transformative effects of the communication revolution the lead that cities have over the rest of the country seems to be widening. The LSE reports that in the UK workers in urban areas earn 8% more than those elsewhere; in London the premium is 24%. Buoyant property prices in major cities underscore the gap.

The world’s mega-cities have seen the highest house price inflation but at the national level the momentum of house price increases has begun to slow as prices approach the 2008 highs once more. The chart below, care of the IMF, shows the strength of momentum still increasing in Q2 2017:- 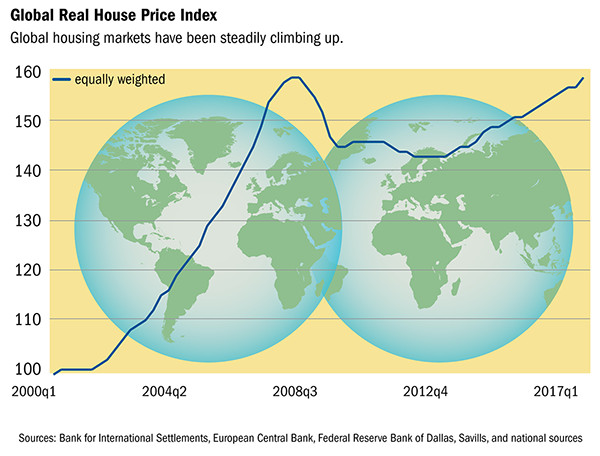 During the year to the third quarter of 2017:

House prices rose in 24 out of the 46 world’s housing markets which have so far published housing statistics, using inflation-adjusted figures.

The more upbeat nominal figures, more familiar to the public, showed house price rises in 38 countries, and declines in 8 countries.

Europe, Canada, Hong Kong, and Macau continue to experience strong price rises.  But most of the Middle East, Latin America, New Zealand and some parts of Asia are experiencing either house price falls – or a sharp deceleration of house price rises.

Only 15 of the 46 markets analysed showed increased upward momentum. Hardly cause for concern, one might think; after all, during the nine year equity bull-market, stock momentum has waxed and waned. However, one market in particular (which, incidentally, is not covered by Global Property Guide analysis) has seen falling prices during the past quarter – Australia.

As the chart below shows, Australian house prices were among the fastest rising in Q2:- 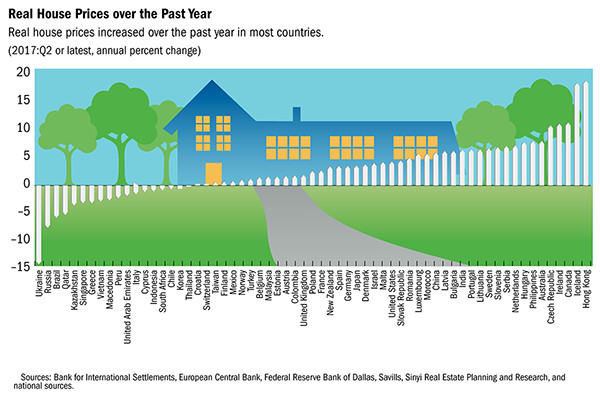 Sydney has been even more extreme:- 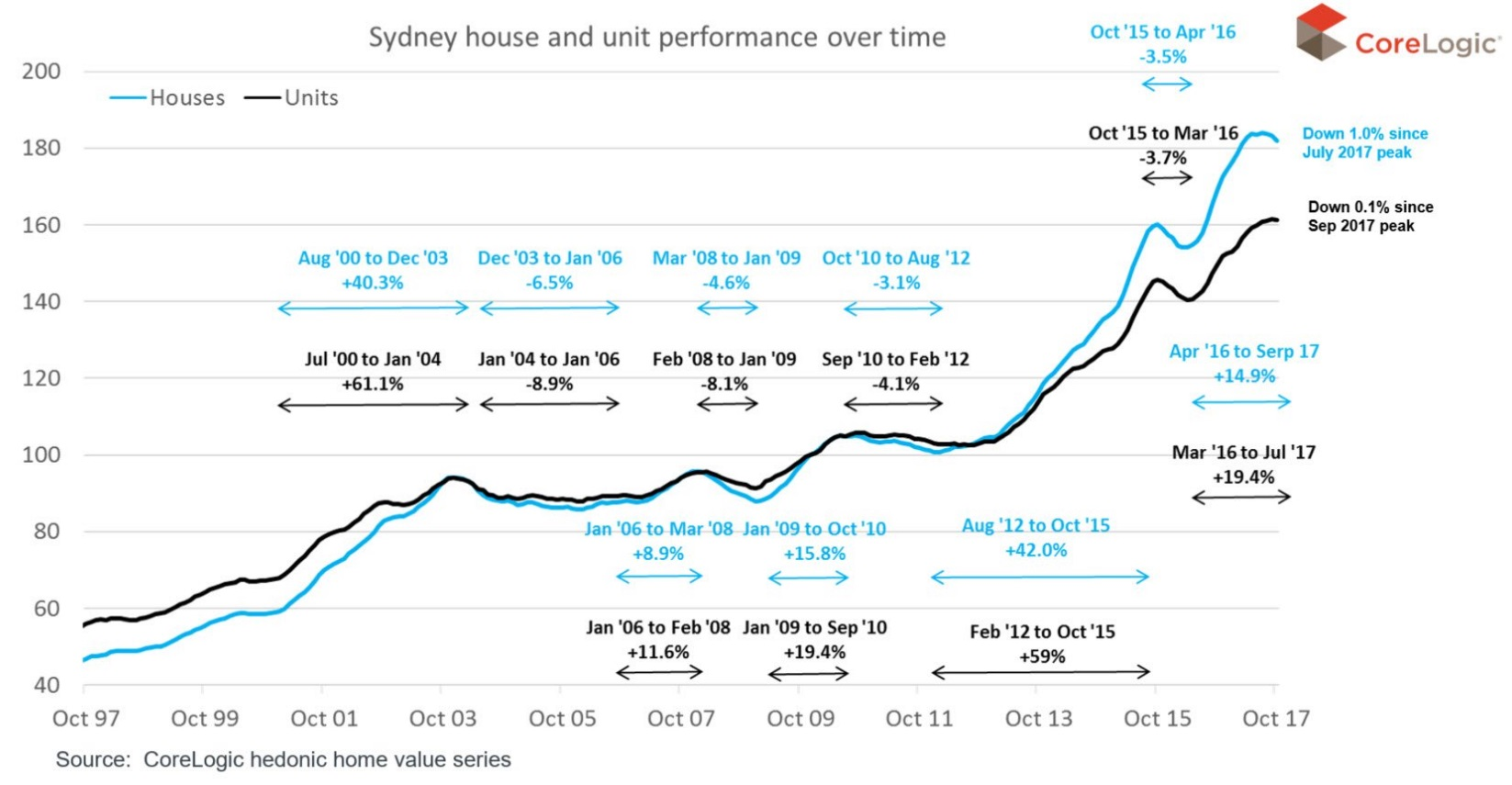 On the basis that, what goes up must, inevitably, come back down, one could argue that a price correction is needed, however, unlike the stock market, house prices have a much stronger impact on the spending habits of the consumer.

The consumer is impacted by the cost of financing mortgage borrowing and their ability to remortgage, relies on a steady increase in the value of housing stock. Rising bond yields, led by the US, where 10yr yields have broken through 2.62% to the upside this week, are likely to be a cause for concern. In Australia, however, fixed rate deals (where they exist) tend to be only two to three years in duration. The remainder of mortgages are variable rate. 1yr Australian bond yields are higher – touching 1.78% this month – but they are still only 40bp off their August 2016 lows.

Housing affordability is also a function of price to income and price to rent:- 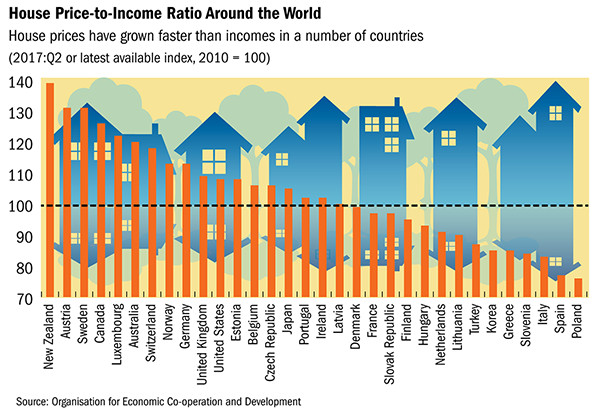 Australia remains one of the most expensive places to buy a house, although their planning constrained neighbour New Zealand is even less affordable, which helps to explain the 1.24% fall in prices for Q3. 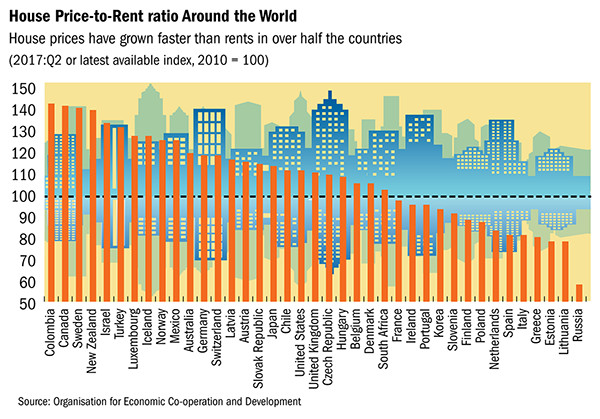 Australia is not the most expensive market on a price to rent basis either, yet, despite relatively low interest rates (and rising commodity prices which have supported the currency) residential real estate prices have begun to decline. The table below shows the quarter on quarter and year on year price change for the five major cities as at 31st January:- 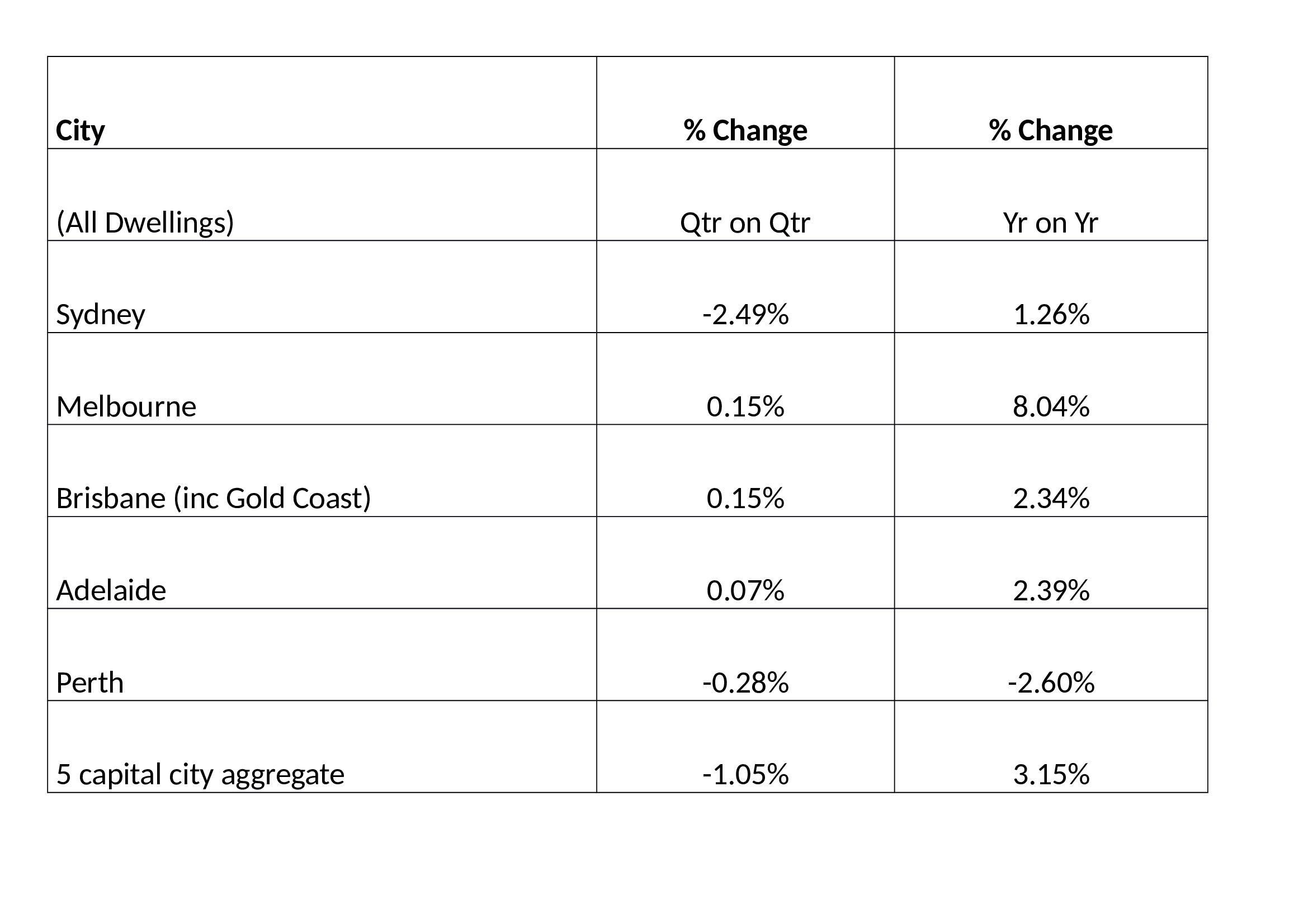 The residential real estate market in Perth has been depressed for several years, but Sydney (led by high-end central Sydney apartments) has begun to follow its western neighbour.

The residential real estate market often reacts to a fall in the stock market with a lag. As commentators put it, ‘Main Street plays catch up with Wall Street.’ The Central Bank experiment with QE, however, makes housing more susceptible to, even, a small rise in interest rates. The price of Australian residential real estate is weakening but its commodity rich cousin, Canada, saw major cities price increases of 9.69% y/y in Q3 2017. The US market also remains buoyant, the S&P/Case-Shiller seasonally-adjusted national home price index rose by 3.83% over the same period: no sign of a Federal Reserve policy mistake so far.

As I said at the beginning of this article, all property investment is ‘local’, nonetheless, Australia, which has not suffered a recession for 26 years, might be a leading indicator. Contagion might seem unlikely, but it could incite a riot of risk-off sentiment to ripple around the globe.

A second FT article discussing 100% reserves: T’was the year the country stood still. Not a car, truck, or bus rode the roads. No…