If recent stock market volatility is interrupting your sleep, Jim Bianco and CNBC’s Rick Santelli are saying, get used to it.  The total assets of all central banks hit $16.4 trillion plus (an all-time high) and these banks now, collectively, own 33 percent of all the world’s sovereign bonds (someone/something had to buy ‘em).

Santelli’s question to Bianco was, if the aggregate size of the world’s central banks is at an all-time high, and these bank’s have purchased a third of all government paper, will these banks be able to “normalize in size” (shrink) without “going through a lot more stock market anguish?” Bianco’s response was a flat, “no.”

Reversing trillions of dollars worth of securities purchases will create market turmoil.  And now that price inflation has entered the equation, the ride is bound to be bumpy. So, who should 401k investors be worried about and keeping an eye on? Bianco and Santelli agree, that person is ECB head man Mario Draghi. Santelli believes Draghi may be caught without a chair in this game of monetary musical chairs. By the way, it’s not all about the Fed any more. “All central bank stimulus is fungible,” says Bianco, “it doesn’t matter who does it.”

“For it is, so to speak, a game of Snap, of Old Maid, of Musical Chairs — a  pastime in which he is victor who says Snap neither too soon nor too late, who passed the  Old Maid to his neighbour before the game is over, who secures a chair for himself when  the music stops. These games can be played with zest and enjoyment, though all the players know that it is the Old Maid which is circulating, or that when the music stops  some of the players will find themselves unseated.”

Surely central bankers aren’t just speculating with funds created from nowhere? However, the once “lenders of last resort” are now engaging in social policies, boosting the collective wealth effect, while keeping the under-capitalized, over-leveraged, and less than competent operators in business.

While the Fed is loaded with Treasuries and Mortgage-Backs, the Swiss National Bank is “in a very risky position. Some 94 percent of its balance sheet assets lie outside the country. According to SNB data, about 20 percent is invested globally in equities, including $88 billion in U.S. stocks,” wrote Mark Grant for Bloomberg last last year.

Draghi’s ECB has a taste for even gamier paper. “According to UBS, the ECB holds 26 bonds rated below investment grade, or “junk,” amounting to $21.2 billion in notional debt,” Grant wrote. 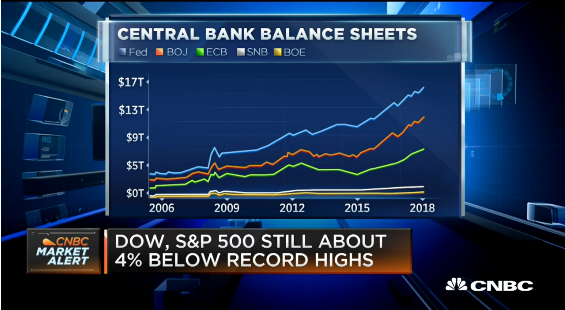 Writing in early December, Mr. Grant, a managing director and chief global strategist at the investment bank B. Riley FBR Inc., concluded, “Regardless of the protestations made by the Fed, and the other central banks, the flow of ‘pixie-dust money’ has not relented. I remind you of the Wall Street adage: ‘Act on what they do and not on what they say.’”

The latest volatility reflects the worry that inflation make cause Draghi to stop the presses (not just talk about it), creating a market event.

“Thus the professional investor is forced to concern himself with the anticipation of  impending changes, in the news or in the atmosphere, of the kind by which experience  shows that the mass psychology of the market is most influenced. This is the inevitable result of investment markets organised with a view to so-called ‘liquidity’. Of the maxims  of orthodox finance none, surely, is more anti-social than the fetish of liquidity, the  doctrine that it is a positive virtue on the part of investment institutions to concentrate their resources upon the holding of ‘liquid’ securities. It forgets that there is no such thing  as liquidity of investment for the community as a whole.”

The longer sovereign yields remain low and the longer the scarcity of safe assets (something very likely given that there is no sign of reduction of the size of the balance sheets of many central banks and, meanwhile, fiscal imbalances are being corrected – see chart below), the most likely is a rise in the percentage of illiquid assets in the portfolios of many investors. Given that the collateral absorption of dealer is dwindling and that repo and MMMFs remain quasi-money claims, the divergence between investors’ needs (yield pickup), central bank policy targets (safe asset negative yields) and regulation outcome (asset light and lower security inventories), the next crisis might not be driven by credit and funding scarcity but rather by illiquid assets and collateral freeze.

If you’re tossing and turning; you should be.

Douglas French is former president of the Mises Institute, author of Early Speculative Bubbles & Increases in the Money Supply , and author of Walk Away: The Rise and Fall of the Home-Ownership Myth. He received his master’s degree in economics from UNLV, studying under both Professor Murray Rothbard and Professor Hans-Hermann Hoppe.

Written By
Other Writer
More from Other Writer
Like the need for separation of church and state, we need the...
Read More