According to most economic experts when an economy falls into a recession the central bank can pull it out of the slump by means of money pumping. This way of thinking implies that money pumping can somehow grow the economy.  Indeed US historical evidence supposedly does show that easy money policy seems to work. For instance on average between 1970 and 2018.2 it took about 11 months before increases in money supply caused increases in the growth rate of industrial production (see chart). 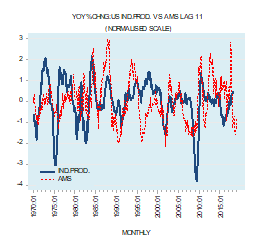 The question is how is this possible? After all if money printing can grow the economy then why not to print plenty of it and make massive economic growth? By doing that, central banks could have created an everlasting prosperity for every individual on the planet.

For most commentators the arrival of a recession is due to unexpected events such as shocks that push the economy away from a trajectory of stable economic growth. Shocks weaken the economy i.e. cause lower economic growth so it is held.

As a result various activities that sprang up on the back of the previous strong money growth rate (usually this emerges because of loose central bank monetary policy) come under pressure.

Recession then is not about a weakening in economic activity as such but about the liquidations of various nonproductive activities that sprang up on the back of an increase in money supply.

Economic growth presented by government statisticians is in terms of monetary expenditure data such as gross domestic product (GDP) and industrial production.

These indicators designed along the line of thinking that spending equates with income – hence more spending leads to a higher national income and in turn to a higher economic growth.

An outcome of so-called economic growth is nothing more here than the strengthening of wealth-consumers and renewed pressure on wealth-generators. All this undermines the process of wealth generation and weakens the true economic growth.

Irrespective whether an activity is productive or non-productive. At any point in time the number and the size of activities that can be undertaken determined by the available amount of real wealth.

From this, we can infer that the overall rate of increase in productive and non-productive activities as a whole set by the rate of expansion in the pool of real wealth.

Observe that this runs contrary to the GDP framework where the pace of monetary expenditure i.e. money pumping sets the so-called economic growth. This however does not make much sense.

After all individuals, whether in productive or non-productive activities must have access to real wealth in order to sustain their life and wellbeing. Note that money cannot sustain individuals it can only fulfill the role of the medium of exchange.

Money, per se, cannot be consumed and cannot be used directly as a producers’ good in the productive process. Money per se is therefore unproductive; it is dead stock and produces nothing.[1]

As long as wealth producers can generate enough real wealth to support productive and non-productive activities, easy money policies will appear to be successful. (Observe that loose fiscal policies are similar to money policy since they also impoverish wealth generators).

Over time, a situation could emerge where because of persistent loose monetary and fiscal policies not enough of wealth generators is left. (Wealth generators have been badly damaged by loose policies). Consequently, generated real wealth not sufficient to support an increase in economic activity.

Once this happens, the illusion of loose monetary policy is shattered – real economic growth must come under pressure.

The government’s attempt to boost the growth rate of GDP by raising its expenditure is also going to fail if the supply of real wealth is dwindling. After all government activities are also require real wealth. (Remember every activity irrespective of whether it is productive or non-productive – must be funded).

If the government were to persist with its aggressive stance, this will only make things much worse. (It will deprive funding from wealth generating activities).

Those commentators who subscribe to the view that the acceleration of money pumping here could fix things hold that something can be created out of nothing.

From this, we can deduce that there is no such thing as stimulatory policies that can grow the economy.

Neither the Fed nor the government can grow the economy. All that stimulatory policies can do is to redistribute real wealth from wealth producers to non-productive activities. These policies encourage consumption not supported by the wealth generating production.

We suggest that so-called economic growth in response to loose policy in terms of GDP and industrial production simply mirrors the monetary expenditure growth rate and not true real economic growth. Since these indicators reflect monetary expenditure, the more money pumped by the Fed the larger the so-called economic growth is going to be. Over time, a situation can emerge where because of persistent loose monetary and fiscal policies there are not enough wealth generators left. Consequently, generated real wealth not large enough to support an increase in economic activity. In this situation neither loose monetary policy nor loose fiscal policy can “work”.