During Trump’s first year, Paul Ryan attempted to pass 2 healthcare bills, both of which were rejected in the House and vehemently opposed by the public. Healthcare is a major issue that Trump must address. This is because if the U.S reduced health expenditures (public and private), this would make it much easier for Trump to cut taxes further and/or spend $1 trillion on infrastructure without increasing the deficit.

This article outlines the major problems with the U.S healthcare system and hence policy recommendations to address these problems.

In short, the U.S spends 18% of GDP on healthcare because it subsidizes demand and limits supply. As a result, supply cannot keep up with the ever-increasing demand in healthcare services. This is the result of government action and hence ‘RyanCare’ must do more to reduce the role of government in the healthcare system. Part 2 will discuss supply side reforms.

The U.S healthcare system subsidizes demand simply because people pay for healthcare with another person’s money. It has reached the point that out of pocket spending is low and that third parties account for a large share of healthcare spending. In 2016, just 10.5% of health spending came out of pocket and the other 89.5% came from a third party. The effect is that consumers do not think about how much things cost nor how much they consume, and doctors do not have any incentive to reign in their costs and hence pass on higher prices to consumers, who are NOT paying the bill. Fundamentally, incentives are distorted. Another consequence is that those who are uninsured and don’t qualify for government services risk bankruptcy and very limited access to care. This explains why the US ranks among the worst in access in the OECD.

Since 1965, U.S healthcare spending has increased from 5% of GDP to over 18% today. In 1960, out of pocket spending accounted for 55% of spending compared with 10% today. Singapore in 2015 saw out of pocket spending account for 65% of all health expenditures in the country. Singapore, last year, spent just 4.5% of GDP on healthcare, with only 28% of healthcare spending coming from the public spending, whilst also having highest life expectancy in OECD and less consumption of healthcare.

Collectively, these sources account for 89.5% of healthcare spending, with Medicare and Medicaid accounting for over $1 trillion per year. 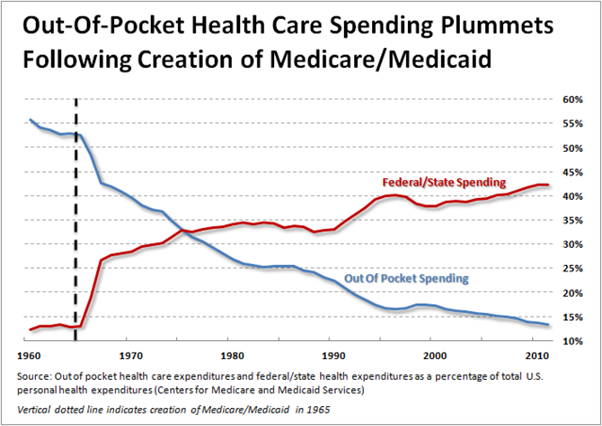 Post-1965, out of pocket spending began to fall at a faster rate and for the first time in 1965, the medical price index began to exceed inflation: 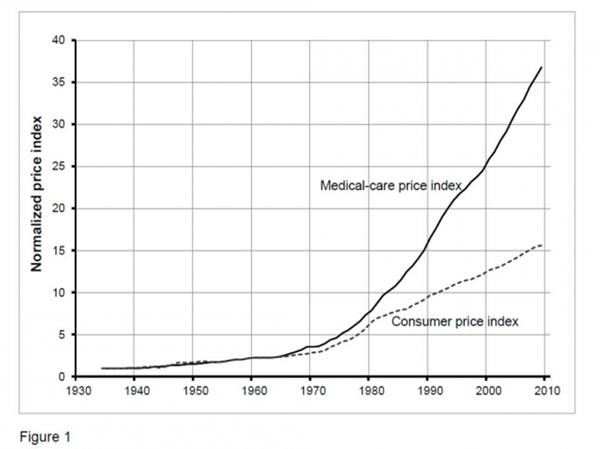 Americans Spend Too Much Both Privately and Publicly

As mentioned earlier, third parties encourage people to overconsume and overcharge for healthcare because they aren’t paying the bill. This is particularly true for Medicare and Medicaid, which have exploded in cost since 1965. Between 1965 and 2008, federal spending on Medicare has increased by 1,319% adjusted for inflation, despite an increase of 74% in the number of beneficiaries. This implies that large increase in Medicare costs are not caused by the growing number of beneficiaries (small part of the reason); it’s the change in incentives once beneficiaries understand that government is paying the vast majority of the bill.  The effect of such large increases in Medicare costs is that firstly the Medicare Part A trust fund will be exhausted by 2026 and the U.S suffers from trillions in unfunded liabilities and a large structural budget deficit. The last time the U.S ran a budget surplus was in 2000. 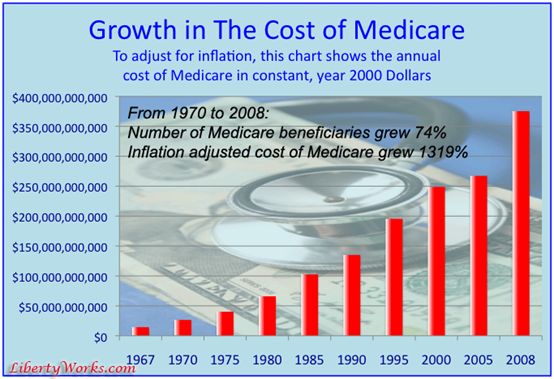 Another problem that has arisen from the third-party fiasco, is that the U.S healthcare system is the most expensive to administer. Over $300 billion is spent to investigate insurance claims, personnel need to be paid for billing process and complying with terms of insurance plans. As a result, 30% of medical bills are spent on administration. 25% of hospital budgets are dedicated to administration and since 1973, the number of administrators has increased by 5,000%. As a result, the healthcare system spends money to employ people who are not even involved with medical care. Then there are not just administrators employed by hospitals, but then there are also staff employed by medical insurance companies themselves. For every 500 people on insurance, there is one person employed by insurance companies.

If consumers were paying the full bill out of pocket, hospitals could cut their administration budgets and use the money left over to reduce bills or expand care. In addition, doctors would have to reduce their prices as consumers now pay the lion’s share of the bill.

Another consequence of the U.S Third Party system is the lack of price transparency. This is due to the U.S adoption of ‘tiered coverage’. This means that there are many types of insurance, which means doctors cannot charge uniform price as different patients have different plans, which have different deductibles and co-pays. The patient’s final bill depends on age, whether insurance is gained through employers or personally, whether it is a high deductible plan, whether their income falls below the Medicaid threshold or whether insurance plan was on the Obamacare exchanges. Depending on which category a patient fits in, co-pays vary and hence the hospital bill is very different.

Who Is Driving the Third-Party Phenomenon?

The third-party tragedy is driven largely by government action. The first way in which government has caused this, is the introduction of public health programmes like Medicare and Medicaid, which puts medical bills on taxpayers’ shoulders. Secondly, new programmes such as Obamacare and S-CHIP provide subsidies for health insurance.

In addition, government also distorts private insurance markets by providing tax credits for insurance. Under Obamacare, a family of 4 making less than $100,000/year can deduct their insurance expenses on their tax returns. Also, employers get a tax cut if they provide health insurance benefits as compensation, as opposed to regular money wages. Consequently, employers have an incentive to purchase comprehensive plans that cover everything. 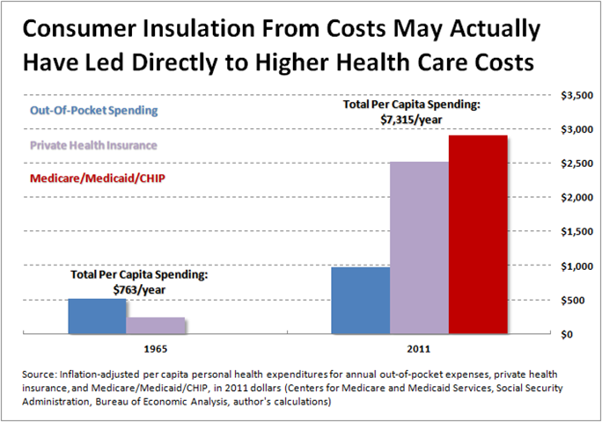 Not only is Singapore a good example, but there are also examples in the U.S where out of pocket spending dominates expenditure. First, one can look at laser eye surgery and cosmetic surgery. In both cases, insurance does not cover these procedures and hence doctors and patients are in contact, not a third party. Since 1992, according to the BLS, the CPI has increased by 45%, healthcare by 70%. However, Cosmetic Surgery prices have increased by just 19%.

Another example, is the Surgery Centre of Oklahoma. Again, this is a medical clinic that does not accept insurance, but has a wide range of services. The prices on SCO are published on their website, meaning that there is price transparency. Also, the prices at SCO are a fraction of Oklahoma hospital prices, whilst providing an equally good service. For example, a Complex Bilateral Sinus Surgery was $5,800 at SCO, compared with $33,000 at Integris Hospital, a neighbouring hospital in Oklahoma. Integris is a resounding example of hospitals which adopt the third-party system. In addition, the majority of Integris’ employees are administrative staff, unlike SCO whose administration is handled by nurses! Every employee at SCO is employed for direct medical care. As a result, while SCO charges 1/6th of the price, they also face lower administrative costs. Also, a carpal tunnel release surgery is $2,750 compared with $7,500 at Integris hospital.

The effect of these lower prices, is that while the patient pays more out of pocket, it means that the economy dedicates fewer resources towards healthcare and hence more resources can be diverted to other things.

There are some Americans who have no insurance at all, yet they still get the care they need. They do so by being a member of cost-sharing organizations such Samaritan Health Ministry or Christian Health Ministry, where members pay monthly contributions and members then pay each other’s bills.

Samaritan has 86,000 members and 74 staff to deal with monthly contributions and medical bills in case someone gets sick. In addition, hospitals would not need to employ administrators as the health ministry simply pays the hospital. As a result, in a world with no insurance, mutual aid societies like Samaritan would rise up. In the case of Samaritan, just 74 people are employed to manage the healthcare of 86,000 members, with hospitals not needing administrators. As a result, in a world with no/limited insurance, the U.S healthcare system could cut thousands of jobs that are not used for direct medical care. As a result, there will be more money for healthcare and/or less spending on healthcare overall.

Also, Samaritan has also proven to negotiate down prices for its fellow members. For example, one member had a serious brain injury. The original hospital bill was $63,000 but Samaritan negotiated down the price to $36,000. As a result, there was more money leftover for Samaritan to divert to other people’s medical needs.

In short, the benefits of having no medical insurance whatsoever could outweigh its disadvantages. One major argument against not having medical insurance is that catastrophic illness cannot be paid out of pocket very easily. Cost sharing ministries like Samaritan seems to take care of the doomsday scenarios.

The central feature of Paul Ryan’s health care reform should be to remove third parties as much as possible. As a result, Ryan Care should go much further than repealing Obamacare. It should involve repealing S-CHIP, Medicare, Medicaid and other programmes such Veterans’ Healthcare and Native American Healthcare service. Fundamentally, the U.S makes the mistake of assuming that health insurance is the means to receive healthcare. RyanCare could consider eliminating medical insurance altogether given the success of Samaritan Health Ministry and other mutual aid organizations.

Written By
Other Writer
More from Other Writer
By Ryan McMaken   2016 was supposed to be the year that the...
Read More