As financial markets adjust to a new, higher, level of volatility, it is worth considering what the Central Banks might be thinking longer term. Many commentators have been blaming geopolitical tensions for the recent fall in stocks, but the Central Banks, led by the Fed, have been signalling clearly for some while. The sudden change in the tempo of the stock market must have another root.

Whenever one considers the collective views of Central Banks it behoves one to consider the opinions of the Central Bankers bank, the BIS. In their Q4 review they discuss the paradox of a tightening Federal Reserve and the continued easing in US national financial conditions. BIS Quarterly Review – December 2017 – A paradoxical tightening?:-

Overall, global financial conditions paradoxically eased despite the persistent, if cautious, Fed tightening. Term spreads flattened in the US Treasury market, while other asset markets in the United States and elsewhere were buoyant…

Chicago Fed’s National Financial Conditions Index (NFCI) trended down to a 24-year trough, in line with several other gauges of financial conditions.

The authors go on to observe that the environment is more reminiscent of the mid-2000’s than the tightening cycle of 1994. Writing in December they attribute the lack of market reaction to the improved communications policies of the Federal Reserve – and, for that matter, other Central Banks. These policies of gradualism and predictability may have contributed to, what the BIS perceive to be, a paradoxical easing of monetary conditions despite the reversals of official accommodation and concomitant rise in interest rates.

This time, however, there appears to be a difference in attitude of market participants, which might pose risks later in this cycle:-

…while investors cut back on the margin debt supporting their equity positions in 1994, and stayed put in 2004, margin debt increased significantly over the last year.

At a global level it is worth remembering that whilst the Federal Reserve has ceased QE and now begun to shrink its balance sheet, elsewhere the expansion of Central Bank balance sheets continues with what might once have passed for gusto.

The BIS go on to assess stock market valuations, looking at P/E ratios, CAPE, dividend pay-outs and share buy-backs. By most of these measures stocks look expensive, however, not by all measures:-

Stock market valuations looked far less frothy when compared with bond yields. Over the last 50 years, the real one- and 10-year Treasury yields have fluctuated around the dividend yield. Having fallen close to 1% prior to the dotcom bust, the dividend yield has been steadily increasing since then, currently fluctuating around 2%. Meanwhile, since the GFC, real Treasury yields have fallen to levels much lower than the dividend yield, and indeed have usually been negative. This comparison would suggest that US stock prices were not particularly expensive when compared with Treasuries.

The authors conclude by observing that EM sovereign bonds in local currency are above their long-term average yields. This might support the argument that those stock markets are less vulnerable to a correction – I would be wary of jumping this conclusion, global stocks market correlation may have declined somewhat over the last couple of years but when markets fall hard they fall in tandem: correlations tend towards 100%:- 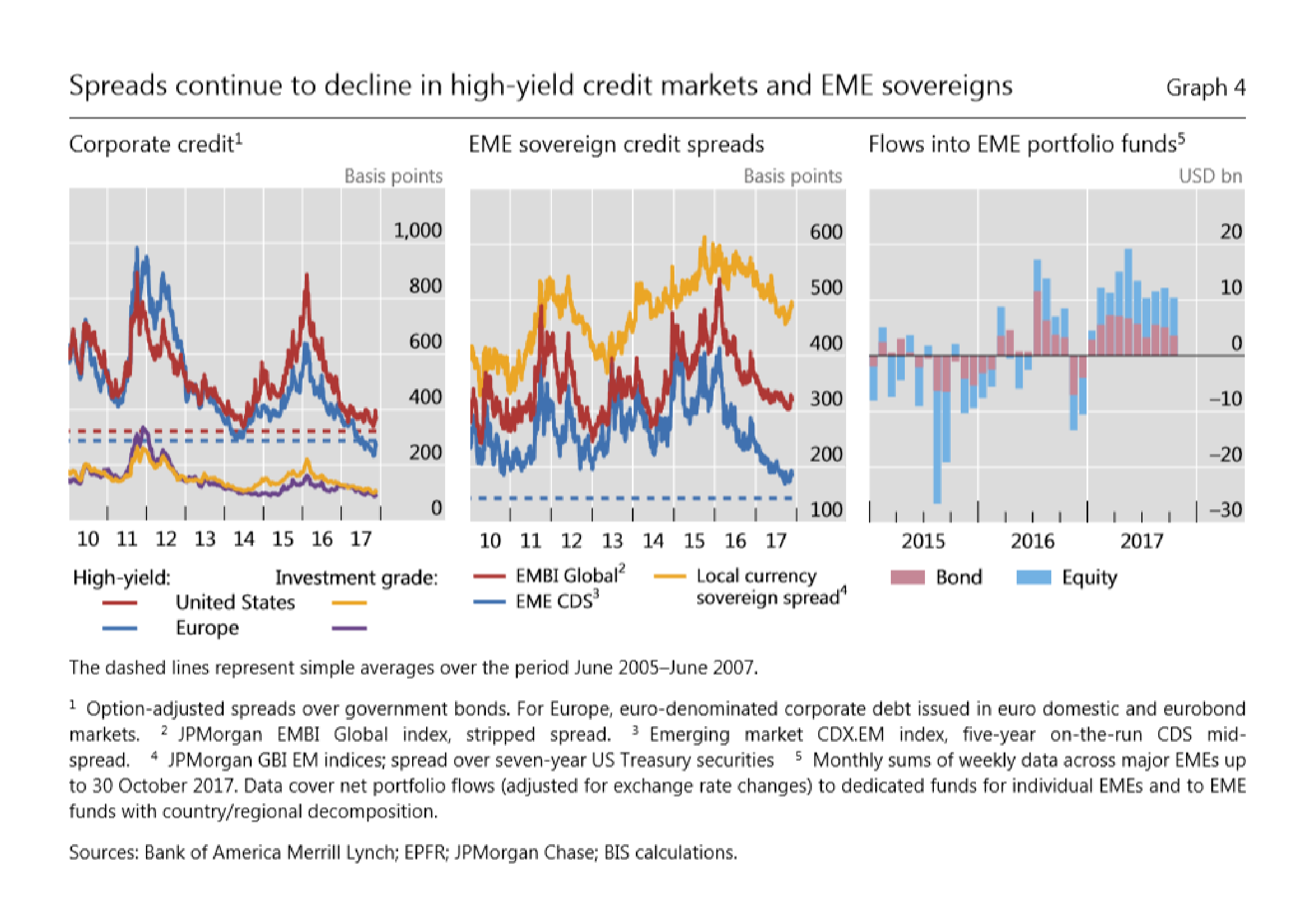 In spite of these considerations, bond investors remained sanguine. The MOVE* index suggested that US Treasury volatility was expected to be very low, while the flat swaption skew for the 10-year Treasury note denoted a low demand to hedge higher interest rate risks, even on the eve of the inception of the Fed’s balance sheet normalisation. That may leave investors ill-positioned to face unexpected increases in bond yields.

Had you read this on the day of publication you might have exited stocks before the January rally. As markets continue to vacillate wildly, there is still time to consider the implications.

Another BIS publication, from January, also caught my eye, it was the transcript of a speech by Claudio Borio’s – A blind spot in today’s macroeconomics? His opening remarks set the scene:-

We have got so used to it that we hardly notice it. It is the idea that, for all intents and purposes, when making sense of first-order macroeconomic outcomes we can treat the economy as if its output were a single good produced by a single firm. To be sure, economists have worked hard to accommodate variety in goods and services at various levels of aggregation. Moreover, just to mention two, the distinctions between tradeables and non-tradeables or, in some intellectual strands, between consumption and investment goods have a long and distinguished history. But much of the academic and policy debate among macroeconomists hardly goes beyond that, if at all.

The presumption that, as a first approximation, macroeconomics can treat the economy as if it produced a single good through a single firm has important implications. It implies that aggregate demand shortfalls, economic fluctuations and the longer-term evolution of productivity can be properly understood without reference to intersectoral and intrasectoral developments. That is, it implies that whether an economy produces more of one good rather than another or, indeed, whether one firm is more efficient than another in producing the same good are matters that can be safely ignored when examining macroeconomic outcomes. In other words, issues concerned with resource misallocations do not shed much light on the macroeconomy.

The speaker reveals two key findings from BIS research; firstly that credit booms tend to undermine productivity growth and second, that the subsequent impact of the labour reallocations that occur during a financial boom last for much longer if a banking crisis follows. Productivity stagnates following a credit cycle bust and it can be protracted:-

Taking, say, a (synthetic) five-year credit boom and five postcrisis years together, the cumulative shortfall in productivity growth would amount to some 6 percentage points. Put differently, for the period 2008–13, we are talking about a loss of some 0.6 percentage points per year for the advanced economies that saw booms and crises. This is roughly equal to their actual average productivity growth during the same window. 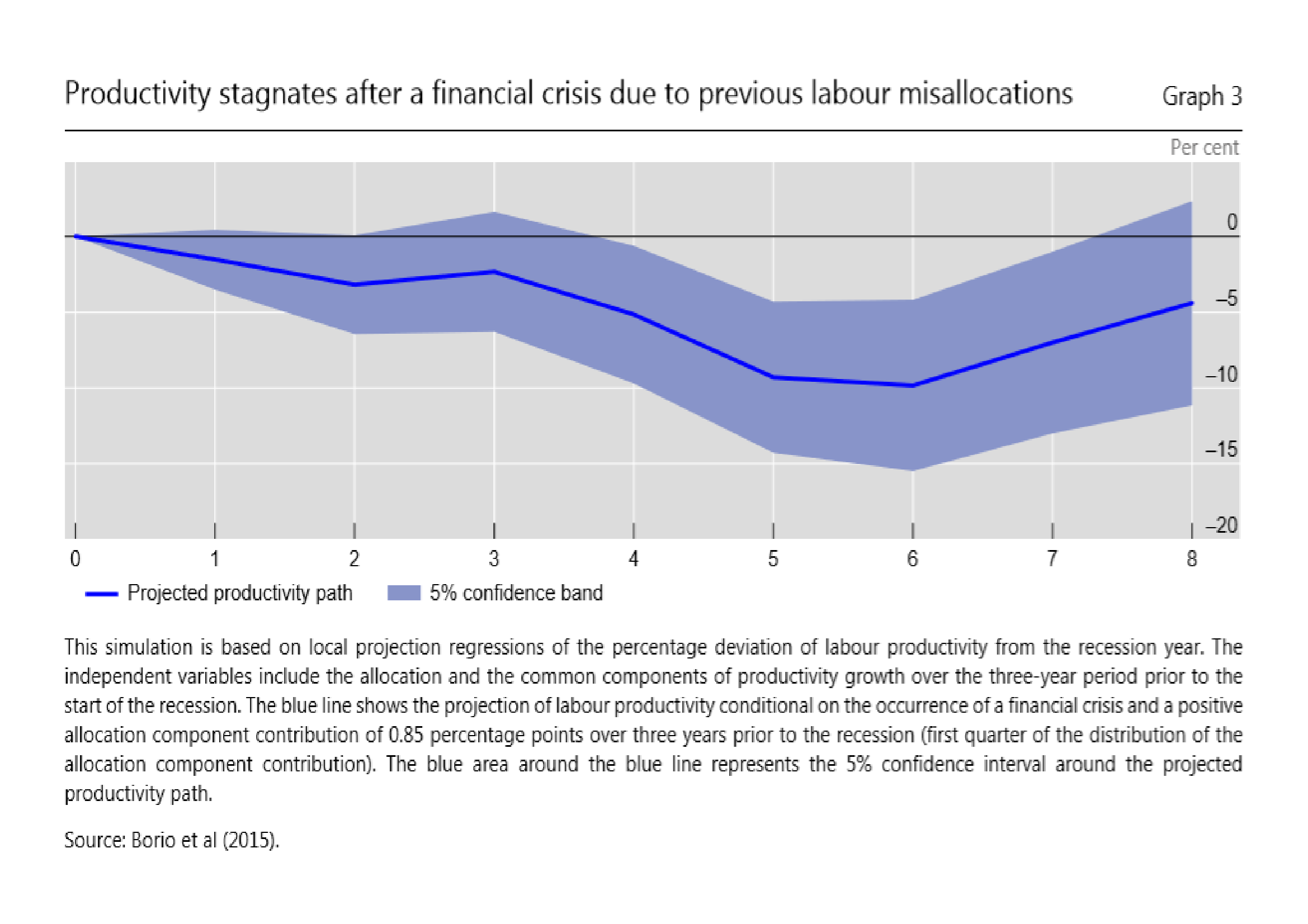 Borio’s conclusion is that different sectors of the economy expand and the contract with greater and lesser momentum, suggesting the need for more research in this area.

He then moves to investigate the interest rate productivity nexus, believing the theory that, over long enough periods, the real economy evolves independently of monetary policy and therefore that market interest rates converge to an equilibrium real interest rates, may be overly simplistic. Instead, Borio suggests that causality runs from interest rates to productivity; in other words, that interest rates during a cyclical boom may have pro-cyclical consequences for certain sectors, property in particular:-

During the expansion phase, low interest rates, especially if persistent, are likely to increase the cycle’s amplitude and length. After all, one way in which monetary policy operates is precisely by boosting credit, asset prices and risk-taking. Indeed, there is plenty of evidence to this effect. Moreover, the impact of low interest rates is unlikely to be uniform across the economy. Sectors naturally differ in their interest rate sensitivity. And so do firms within a given sector, depending on their need for external funds and ability to tap markets. For instance, the firms’ age, size and collateral availability matter. To the extent that low interest rates boost financial booms and induce resource shifts into sectors such as construction or finance, they will also influence the evolution of productivity, especially if a banking crisis follows. Since financial cycles can be quite long – up to 16 to 20 years – and their impact on productivity growth quite persistent, thinking of changes in interest rates (monetary policy) as “neutral” is not helpful over relevant policy horizons.

During the financial contraction, persistently low interest rates can contribute to this outcome (Borio (2014)). To be absolutely clear: low rates following a financial bust are welcome and necessary to stabilise the economy and prevent a downward spiral between the financial system and output. This is what the crisis management phase is all about. The question concerns the possible collateral damage of persistently and unusually low rates thereafter, when the priority is to repair balance sheets in the crisis resolution phase. Granted, low rates lighten borrowers’ heavy debt burden, especially when that debt is at variable rates or can be refinanced at no cost. But they may also slow down the necessary balance sheet repair.

Finally, Borio returns to the impact on zombie companies, whose number has risen as interest rates have fallen. Not only are these companies reducing productivity and economic growth in their own right, they are draining resources from the more productive new economy. If interest rates were set by market forces, zombies would fail and investment would flow to those companies that were inherently more profitable. Inevitably the author qualifies this observation:-

Now, the relationship could be purely coincidental. Possible factors, unrelated to interest rates as such, might help explain the observed relationship. One other possibility is reverse causality: weaker profitability, as productivity and economic activity decline in the aggregate, would tend to induce central banks to ease policy and reduce interest rates. 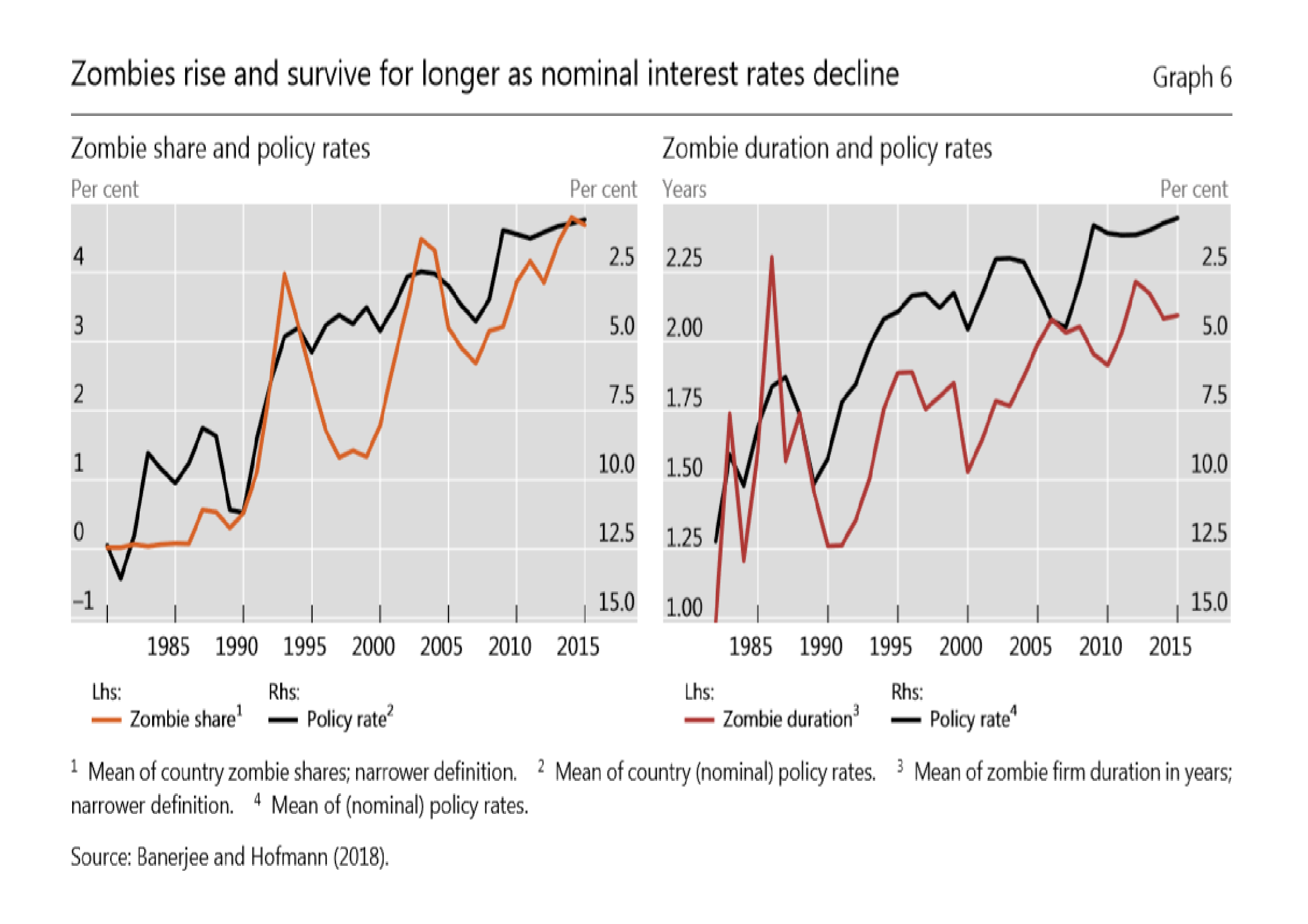 Among the conclusions reached by the Central Bankers bank, is that the full impact and repercussions of persistently low rates may not have been entirely anticipated. An admission that QE has been an experiment, the outcome of which remains unclear.

These two articles give some indication of the thinking of Central Bankers globally. They suggest that the rise in bond yields and subsequent fall in equity markets was anticipated and will be tolerated, perhaps for longer than the market anticipate. It also suggests that Central Banks will attempt to use macro-prudential policies more extensively in future, to insure that speculative investment in the less productive areas of the economy do not crowd out investment in the more productive and productivity enhancing sectors. I see this policy shift taking the shape of credit controls and increases in capital requirements for certain forms of collateralised lending.

Whether notionally independent Central Banks will be able to achieve these aims in the face of pro-cyclical political pressure remains to be seen. A protracted period of readjustment is likely. A stock market crash will be met with liquidity and short term respite but the world’s leading Central Banks need to shrink their balance sheets and normalise interest rates. We have a long way to go. Well managed profitable companies, especially if they are not saddled with debt, will still provide opportunities, but stock indices may be on a sideways trajectory for several years while bond yields follow the direction of their respective Central Banks official rates.

0 replies on “What to expect from Central Bankers”