The euro banking sector is huge: In April 2018, its total balance sheet amounted to 30.9 trillion euro, accounting for 268 per cent of gross domestic product (GDP) in the euro area. Unfortunately, however, many euro banks are in lousy shape. They suffer from low profitability and carry an estimated total bad loan exposure of around 759 billion euro, which accounts for roughly 30 per cent of their equity capital.

Share price developments suggest that investors have lost quite some confidence in the viability of euro banks’ businesses: While US bank stocks are up 24 per cent since the beginning of 2006, the index for euro-area bank stocks is still down by around 70 per cent. Perhaps most notably, ’Germany’s two largest banks, Deutsche Bank and Commerzbank, have lost 85 and 94 per cent, respectively, of their market capitalization. 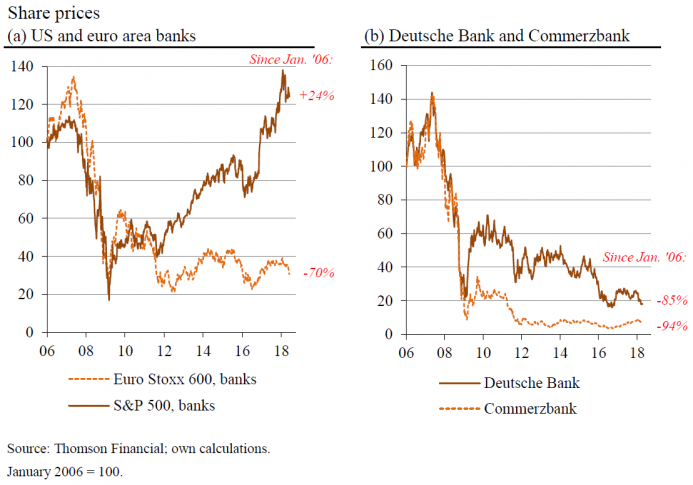 With a balance sheet of close to 1.5 trillion euro in March 2018, Deutsche Bank accounted for around 45 per cent of German GDP. In international comparison, this an enormous, downright frightening dimension. It is mostly the result of the bank still having an extensive (though not profitable) footprint in the international investment banking business. The bank has already started reducing its balance sheet, though. 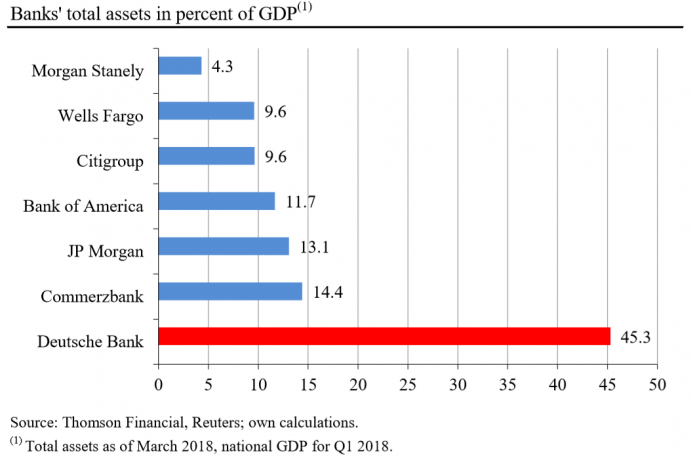 Beware of big banks — this is what we could learn from the latest financial and economic crises 2008/2009. Big banks have the potential to take an entire economy hostage: When they get into trouble, they can drag everything down with them, especially the innocent bystanders – taxpayers and, if and when the central banks decide to bail them out, those holding fiat money and fixed income securities denominated in fiat money.

For this reason, it makes sense to remind ourselves of the fundamental risks of banking – namely liquidity riskand solvency risk –, for if and when these risks materialise, monetary policy-makers can be expected to resort to inflationary actions. In fact, to fend off these risks from materialising, central banks have committed themselves to pursuing chronically inflationary policies.

Liquidity risk describes the risk that a bank might fail to meet its credit obligations in full. This is an inherent risk as most banks extend long-term loans and refinance themselves with short-term funds. As a result, they have to succeed in rolling-over maturing debt. In a situation in which investors are no longer willing to lend their money, the banks may not be able to obtain new funds and become illiquid.

However, in today’s fiat money system, central banks are in a position to print up any amount of base money at any given time, and they can lend this newly created money to ailing banks at their discretion. As a result, the liquidity risk can be, and actually is taken care of by central banks. A single bank may go under due to a lack of liquidity. But not the banking system as a whole, as in a liquidity crisis, central banks can, and do, decide to prop up the system.

Solvency risk means the risk that banks’ assets are not worth enough to service banks’ debts. It can strike if and when losses on loans make a bank’s incoming cash flow drop below its cash outflows. A bank may well continue to operate for quite a while despite being insolvent: It meets its daily payment requirements because cash outflows remain below the total that will become due at some point in time.

If and when insolvency makes liabilities exceed its assets, however, a bank’s equity capital is wiped out, and the bank may even default on its debt, and savers and investors lose their funds. While it is relatively easy for a central bank to prevent a liquidity crisis in the banking sector, it is quite another matter when it comes to an insolvency crisis: Once asset values start falling and losses are getting realized, problems reach a new dimension.

If banks in such a situation fail to raise new equity capital, the government – fearing a collapse of the banking system – typically steps in. It either uses taxpayers’ money to provide banks with new equity capital, or it can issue new debt, which is bought by the central bank against issuing newly created base money, with the latter being paid in as new bank equity capital – and the affected banks being taken over by the government.

In reality, central banks and governments have put a ‘safety net’ under the banking industry. Smaller banks may well go under, but a scenario in which the entire banking system goes belly up will be prevented for a simple reason: Politically speaking, the costs of a fiat money system collapse is simply too high and has to be prevented; no price is viewed as too costly to keep the fiat money system going.

This is what sets a truly vicious circle into motion. For today’s fiat money causes booms which sooner or later must turn into a bust. The liquidity risk and especially the insolvency risk can be expected to hit the banking industry at some point. To prevent it from materializing, the central bank must keep expanding the quantity of (base) money and keep interest rates at artificially low levels, keeping the inflationary scheme going.

Central banks sow the seeds of crisis, and once the crisis unfolds, especially when it affects banks negatively, central banks run bailouts by injecting new money provided at artificially low interest rates, and the vicious cycle starts all over again. Needless to say that such a cycle causes economic and social problems on a grand scale. It makes the purchasing power of money drop. Only a few benefit, while the majority of the people is taken advantage of.

Given the problems of the euro area banking industry, we should indeed wonder what might happen next. The scenario that the euro area economies might grow out of their banking problems would undoubtedly be a rather convenient one, but it is fairly unlikely. Bailing out ailing banks with taxpayers’ money and an inflation-financed recapitalization of banks’ equity capital might be a much less pleasant scenario, but it appears to be more likely.

For one thing is indisputable: If an oversized banking apparatus starts to shrink, the outstanding stock of credit and money will decline. And as the quantity of money goes down, prices across the board trend downwards causing deflation. Needless to say that deflation is a nightmare for highly indebted economies: Falling prices increase the real debt burden, sending the financial and economic system into a cataclysmic downward spiral.

The current president of the European Central Bank (ECB), Mario Draghi, said in July 2012: “[T]he ECB is ready to do whatever it takes to preserve the euro. And believe me, it will be enough.” Taken at face value, these words suggest what the ECB is ready to do: to print up ever greater quantities of euro balances to prevent the euro currency from falling apart. Ironically, however, this is precisely what the ECB’s money printing scheme will bring about.

Ludwig von Mises (1881 – 1973) noted in this context wisely: “All governments are firmly committed to the policy of low interest rates, credit expansion, and inflation. When the unavoidable aftermath of these short-term policies comes to pass, they know only of one remedy — to continue their inflationary ventures.”1 These words capture pretty well what has been going on in the euro area.

Without the ECB’s overly generous issuing of fresh fiat money, the euro banking apparatus could not have reached its current size, its bloated dimension. And with its attempt to rectify its inflationary policies of the past – namely preventing the euro banking sector from collapsing, the ECB is about to pursue even more extensive inflationary policies. This doesn’t bode well for the euro’s purchasing power going forward.

The euro area provides a textbook example of a rather unholy alliance between the central bank and commercial banks: It has not only caused an inflationary boom and bust cycle that has resulted in a severe financial and economic crisis. The unholy alliance has also made possible an oversized (and poorly performing) banking industry, and the policy to keep it going will result in a rip off of the majority of the people on a truly grand scale.

Following the ideas of Keynes and Friedman, most mainstream economists associate economic growth with increases in the demand for goods and services. Both Keynes…