“The United States has an $800 Billion Dollar Yearly Trade Deficit because of our ‘very stupid’ trade deals and policies,” tweeted President Trump in March. As result, he said, “our jobs and wealth are being given to other countries.”

On the basis of this belief, that trade deficits amount to giving away jobs and wealth, Mr. Trump has launched an unprecedented simultaneous attack on all of America’s major trading partners. From the EU to Mexico, from Canada to China, the president is imposing tariffs and quotas on imports of steel, aluminum, autos, and other products. Given the angry and uncompromising response of the affected governments, and the prospect of an escalating global trade war, it is imperative that—at the very least—Mr. Trump get his facts straight.

But let us begin with basic trade logic. The president’s commerce secretary, Wilbur Ross, famously asserted that imports reduce gross domestic product (GDP), and that trade deficits therefore “weaken our economy.” This was, he said, “Economics 101.” Yet both of us have taken Economics 101 (and then some), and neither of us learned any such thing.

That is because it is nonsensical. Ross is correct in stating that GDP is calculated by summing domestic economic activity and exports, and then subtracting imports, but wrong in interpreting this to mean that GDP is higher without imports. When you buy a product in the United States, the value of the imported content must be stripped out in order to capture the value of the purely domestic content. The foreign content does not itself reduce GDP; it is simply not part of it. Imports have no determinate effect on GDP, positive or negative.

The importance of global supply chains, however, means that attempts to reduce imports by government fiat are more likely to lower than to increase GDP. If the American company that sold you its product had not had access to foreign components, you might well have wound up buying an alternative product made, say, entirely in China.

We suspect that neither Mr. Trump nor Mr. Ross will be entirely convinced by logic. So let us move on to facts. Facts are the only other thing available, beyond gut instinct or misrepresentation, upon which to base trade policy.

To test Mr. Trump’s assertions historically, we have examined how changes in GDP and the trade (or current-account) balance, and changes in employment and the trade balance, have correlated since 1990 across a broad sample of developed countries—the United States, Australia, Canada, France, Germany, Italy, Japan, and the United Kingdom.

Here is what we found. Look first at the top figure below. If Mr. Trump is right, then a positive movement in the current-account balance (away from deficit and towards surplus) should go hand in hand with rising GDP growth. That is, the line should slope upward. Yet it does not. It slopes downward, meaning that greater deficits are more likely to go together with higher growth. This relationship is even more pronounced when we look only at the United States. 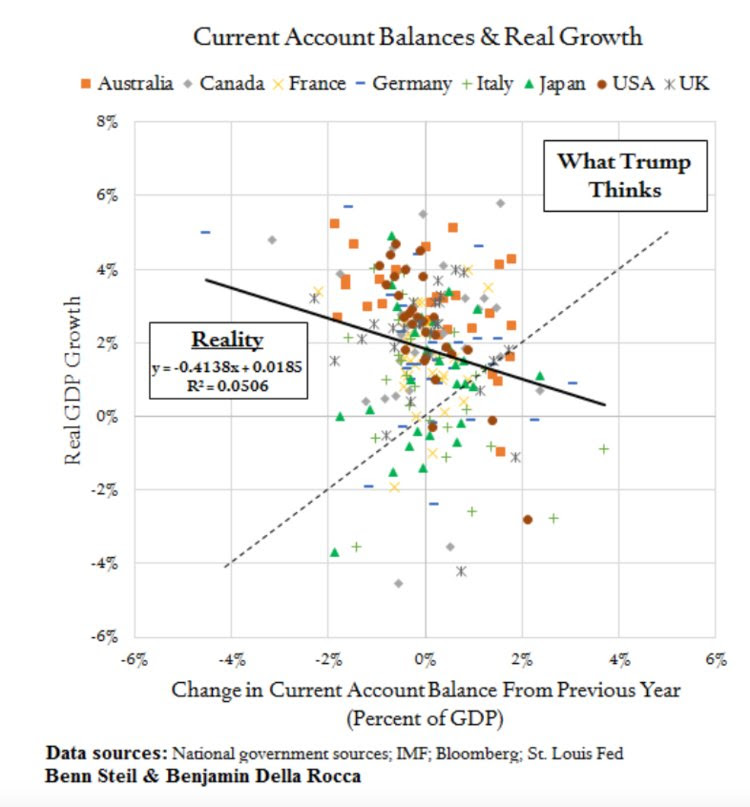 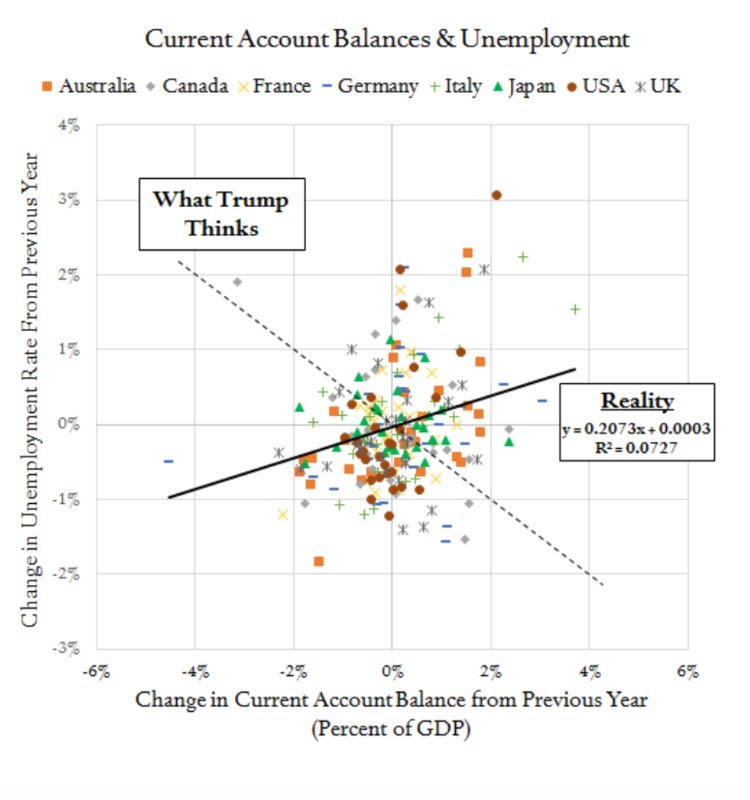 What explains this relationship? Rising growth typically means rising consumption and falling savings, which pushes up foreign borrowing and imports. Better growth can therefore produce a larger trade deficit. Look now at the bottom figure above. Again, if Mr. Trump is right, then a positive movement in the current-account balance should go hand in hand with falling unemployment.

That is, the line should slope downward. Yet it does not. It slopes upward, meaning that greater deficits are more likely to go together with lower unemployment. And again, this relationship is even more pronounced when we look only at the United States. The lesson for Mr. Trump is clear: trade deficits do not mean that American wealth or jobs are “being given to other countries.” Far from it. His claim that it does is logically vacuous and empirically false.

The good news is that there is still time for the president to begin one of his classic climb-downs before major damage is done to the U.S. and global economy. Indeed, the relative calm in global equity markets suggests that investors believe such a climb-down is likely. We are less confident, but still hopeful that an appeal to facts might wake up the few internationalists left in the White House.

Written By
Other Writer
More from Other Writer
Friedrich August von Hayek’s speech at the Nobel Banquet, December 10, 1974...
Read More

0 replies on “Benn Steil: Trump said the trade deficit hands jobs and wealth to other countries — here’s why that’s wrong”