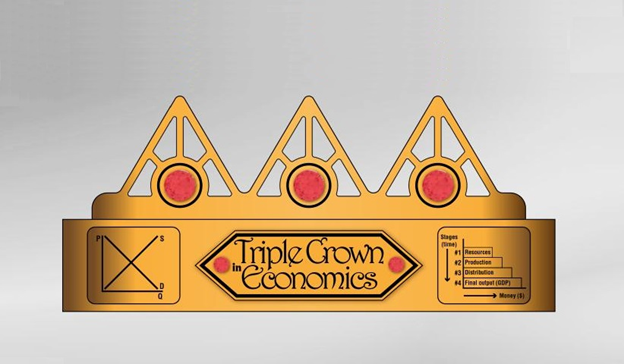 The presentation took place on July 11, 2018, at the Paris Resort in Las Vegas in a session titled “Who’s Winning the Battle of Ideas?” as part of the global economic summit at FreedomFest. 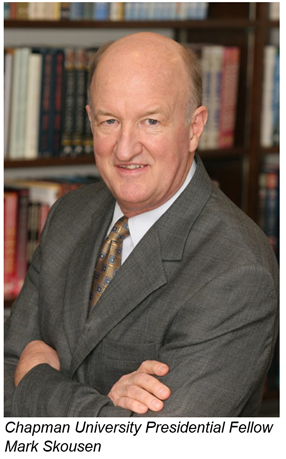 “Mark is a superb and highly original scholar,” Forbes said. “He’s a highly accomplished economist and in a normal, non-political environment, he and a handful of others would have already won the Nobel Prize for economics. He brings history to life.  And he is a pioneering thinker, especially with his gross output (GO) statistic.”

President Daniele Struppa echoed those sentiments and added that the University is privileged to have such a scholar among its faculty.

“We are proud to see our Presidential Fellow Mark Skousen recognized for his contributions to economics. Our students are lucky to be able to take his classes,” Struppa said.

Fellow economist and President Emeritus Jim Doti said the prize was well-deserved recognition of profound contributions to the discipline of economics.

“As a colleague of Mark Skousen, I have come to know that he is not only a productive and significant scholar, but he is also a gifted and inspiring teacher.  He is richly deserving of the Triple Crown in Economics,” Doti said.

Making the Case for Gross Output

Skousen has long advocated that the GO statistic be released in companion with the traditional Gross Domestic Product (GDP) reports. GO measures total sales at all steps in the production process, capturing a picture of how money circulates through the economy from raw resources to final products. GO is a better measure of what is happening in the economy and a useful barometer for economic forecasters. 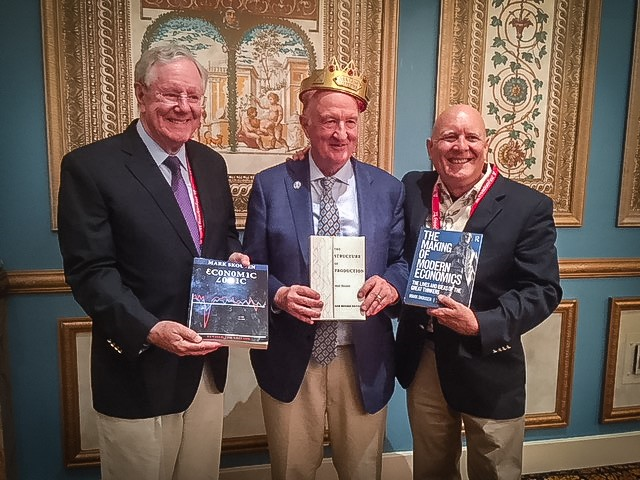 “Of all my contributions, the adoption of my gross output (GO) statistic by the federal government is undoubtedly my biggest success. GO is being added to many economics textbooks and is gaining adherence on Wall Street. It won’t be long before it becomes an essential part of every economist’s and financial analyst’s tool box as the top line in national income accounting,” Skousen says.

Skousen is also a prolific author, with 25 books on economics, personal finance and investing to his name.

Among those are three in particular that have shaped the scholarship and teaching of economics.

“The Structure of Production” offers a supply-side, Austrian alternative to John Maynard Keynes’s macro model; “Economic Logic”  provides a market-friendly substitute for Paul Samuelson’s popular textbook; and “The Making of Modern Economics”  replaces Robert Heilbroner’s “Worldly Philosophers” with a history wherein every major economic thinker is evaluated according to whether they built upon Adam Smith’s “system of natural liberty” or seek to tear it down,” he says.

In addition, Skousen has authored “A Viennese Waltz Down Wall Street,” “The Maxims of Wall Street,” and “The Completed Autobiography by Benjamin Franklin.” He writes an award-winning financial newsletter, Forecasts & Strategies and produces the annual “FreedomFest” conference in Las Vegas. He has been a contributor to the Wall Street Journal and Forbes magazine, as well as a regular contributor to “The Santelli Exchange” on CNBC-TV and “The Nightly Business Report” on PBS.

To read the full text of Mr. Forbes remarks, go to http://mskousen.com/2018/07/steve-forbes-remarks-on-economics-triple-crown-to-mark-skousen/

The award was arranged by Ken Schoolland, professor of economics at Hawaii Pacific University, who has written a tribute, “Mark Skousen’s Contributions to Economics,” published by the Cobden Centre in London.

In the pamphlet he stated that Skousen’s three major achievements in economic theory, education, and history constitute a “triple crown in economics” such as in horse racing, baseball, and surfing.

For a list of Dr. Mark Skousen’s books and articles on economics and finance, go to www.mskousen.com.

For more information on his investment newsletter and services, go to www.markskousen.com.

For details about gross output (GO), go to www.grossoutput.com.

To interview Dr. Mark Skousen on this press release, contact him at mskousen@chapman.edu, or Ned Piplovic, Media Relations at skousenpub@gmail.com.

Written By
Mark Skousen
More from Mark Skousen
(This paper is an expanded version of the first Adam Smith Lecture...
Read More