So How Does the UK and Other Socialist Health Systems Keep Costs Down?

The answer is rationing. Given that healthcare is completely free for UK citizens, the assertion that third parties lead to higher costs should be much more relevant in the UK. While that is true, the UK and other socialized systems like Canada, keep costs down through rationing, thereby dampening the effects of distorted incentives that arise from third parties.

My overall conclusion is that single payer health systems do not produce better health outcomes and worse quality care. As a result, to improve this position, the UK and Canada would have to increase funding significantly, which would not make single payer health cost effective as its supporters claim. 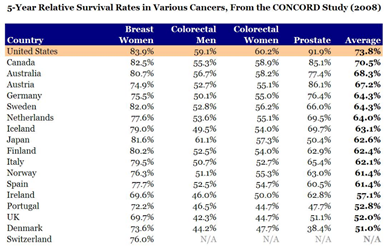 While the World Health Organization ranks the UK higher than the U.S overall, the U.S is no 1 in the world in “responsiveness to patients’ needs in choice of provider, dignity, autonomy, timely care, and confidentiality.” As a result, the U.S healthcare system is able to respond to patients’ illnesses much faster than the UK, because consumers pay something out of pocket and the price is not zero. Because the UK charges £0 out of pocket for patients and charges £0 for a procedure, the demand for healthcare is high. As a result, the UK suffers from more rationing than the U.S in some cases.

As shown on the left, according to the CONCORD programme, U.S cancer survival rates are far higher than the UK. Nevertheless, the US still spends too much. Not only are cancer survival rates lower in the UK, but the waiting times for major procedures like hip replacement are much longer. For example, waiting times in Canada are far longer. Reported by the Health Council of Canada and a study done by the 2010 Commonwealth Fund study found that 43% of Canadians waited more than 4 weeks to see a specialist, compared with only 10% of Americans. As a result, the Socialist healthcare systems have not only seen increasing costs, but they are less able to provide healthcare at a reasonable pace. If Canada wanted to maintain quick waiting times like it used to, the Canadian government would have had to increase spending at a much faster rate, putting pressure on the budget and casting doubts on the cost savings of a socialist healthcare system.

Also, there are many cases of people from countries with socialist healthcare systems that come to the U.S. According to the Fraser Institute, 63,000 Canadians received non-emergency outside Canada. It is likely because the government rationed care to the point that people needed to find an alternative. Does this mean the U. S’s system better than Canada? No, the U.S while providing care quicker still spends too much on healthcare. As explained before and later, the U.S healthcare system is very much like the other health systems- Americans also don’t pay for healthcare at the point of use.

In fact, for Americans that have medical conditions, a greater proportion receive the treatment they need than in Canada. 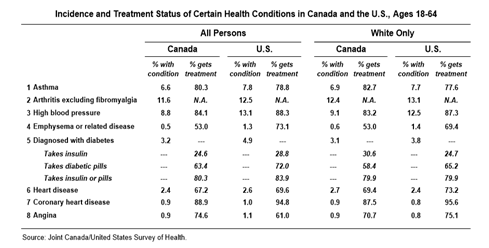 Furthermore, Americans are likely to receive more preventative care, which once again demonstrates much less rationing. 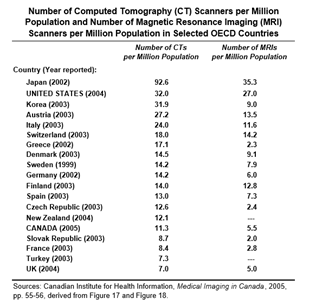 As shown by the table above, the U.S ranks second when looking at the number of MRI and CT scans per million and considerably higher than the UK and Canada. It implies that resources are more readily available and that the U.S health system is more responsive to patients’ needs. However, it is worth noting that this large consumption of medical equipment does not improve health outcomes. The large over-utilisation of MRIs is a consequence of the third-party racket discussed earlier.

Waiting times are also a useful indicator. Again, the U.S is overwhelmingly better at delivering healthcare quickly, confirming once again that government sponsored/provided healthcare is not better. When the government pays for healthcare at the point of use and through taxes, demand is unlimited as consumers aren’t paying anything. This inevitably leads to shortages as consumers demand more and doctors are less willing to supply healthcare. So, demand massively exceeds supply, thereby leading to queues and longer waiting times. These longer waiting times save money as those who are unwilling to wait may get their treatment privately/abroad or patients die while on the waiting list. For example, 63,000 Canadians went to the U.S to get treatment.

Part of the reason why America spends more than Europe and Canada is because Americans also deliver better healthcare and much more quickly. Americans are more likely to get care in private or semi-private rooms and Americans get major surgery much quicker than Britons and Canadians.

Believe it or not, America does have universal, socialist healthcare. It’s called Medicare and the VA Hospital system. In summary, single payer healthcare will not save money for the U.S. Canada spends less on its single payer healthcare because it rations care for new-born babies (but manipulates the data), has longer waiting times than the U.S. Assuming the U.S wanted to maintain its responsive health system, spending would not be lower. Single payer healthcare, free at the point of use is exactly how the U.S health system works right now! As mentioned earlier, out of pocket spending only accounts for 11% of health spending and we also found that this rise in third parties explained the rising costs. Simply shifting that burden entirely on government would not save money as the third-party dynamic still exists. Instead, the U.S would begin to ration more and be less responsive to patients’ needs.

Medicare is a programme for seniors and Medicare is almost like a single payer system; the government does pay for most procedures, but seniors do have to cover the remaining procedures with supplemental insurance. However, the government still pays most of seniors’ medical bills. One can now compare costs, health outcomes and waiting times. To start off, the life expectancy at age 65 for American women was 20.6 years, compared with 20.8 years for British women aged 65. As a result, there is almost no gap between American seniors and British seniors. Also keep in mind, a greater % of American seniors are obese, increasing their likelihood of death before age 75. This implies that thanks to Medicare, seniors get the care they need and better health outcomes than UK seniors (once one accounts for differences in obesity, diet etc.) and hence America should consider ‘Medicare for all’. However, the reason why American seniors have in some cases, better care than British and Canadian seniors is because Medicare spends more. Medicare spending (excluding prescription drug benefit) was $570 billion. There were 55 million beneficiaries (source: Kaiser Foundation), meaning spending per beneficiary exceeded $10,000. This is significantly higher than Canadian and UK spending. Furthermore, to provide care almost at the point of use, Medicare costs have escalated. Between 2016-2026, it is projected that Medicare per capita spending will increase 4.5% per year (source: Kaiser Foundation). This is a heavy price to pay for single payer system. As a result, it is doubtful that the U.S will save money if it transitioned into full single payer, assuming Americans want to maintain their high cancer survival and quicker waiting times. According to the liberal-leaning Urban Institute, Bernie Sanders’ Medicare for All would cost $32 trillion over the next 10 years. As a result, this is not much higher than the current amount of health spending in the U.S.

Inferiority of Canada and UK Healthcare

To prove that Single Payer healthcare does not save money, the Canadian health system needs closer attention. The Fraser Institute study in 2015 found that Canadians waited a median of 18.3 weeks. This time represents the gap between patients who got a referral from their general practitioner and the receipt of treatment. In 1993, the median wait time was just 9.3 weeks! According to the Canadian Institute for Health Information, the proportion of Canadians that waited within 6 months for knee replacement fell from 82% to 69% between 2015 and 2017. Between 2015 and 2017, the proportion of Canadian patients that received hip replacement within 6 months, fell from 81% to 76%. This implies that while the Canada’s public health spending grew slowly, the result was that quality of care has not been maintained. If Canada wanted to maintain the impressive 1993 figures, public health spending would have had to increase much faster. This would have cast doubts on whether public healthcare reduces costs. Evidence of waiting times can be seen below. Below shows waiting times in 1993 and 2015 in the Canadian provinces. In every province, waiting times increased for appointments with physicians, in many cases, doubled. The only conclusion one can draw from this graph is that single payer healthcare costs money and costs escalate because the patient is paying the bill. As a result, governments will make cuts to slow down costs. The effect is that patients pay for it through rationing. Graph 2 again confirms longer waiting times as waiting times for surgeries have doubled. 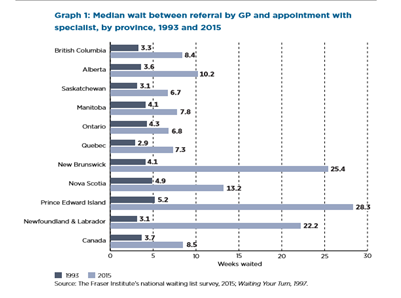 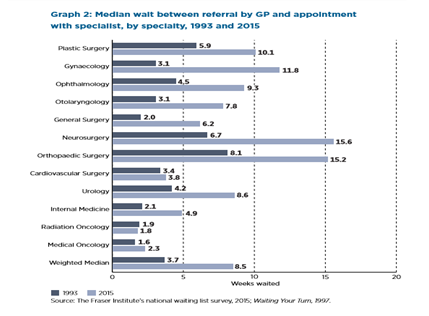 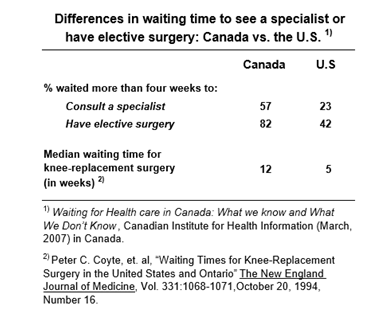 Another consequence of rationing is that self-reported health is worse. In other words, what proportion of respondents say they are in excellent health? A 2003 Canada and US joint study found that seniors in the U.S reported excellent health more than Canadian seniors. 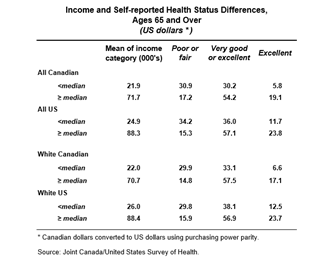 The effect of all this rationing is not only that self-reported health is higher in the U.S, but Americans are less dissatisfied. 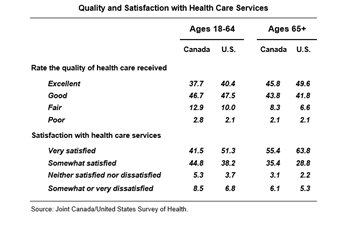 The same premise applies to the UK. UK waiting times have gotten worse and critics of the Conservative government claim that waiting times are worse than under Blair. In 2014, 51,000 Britons waited more than 18 weeks, but this number had increased to 93,000 by 2015. 18 weeks was a target set by the Blair government- it was used to measure how quickly the NHS can respond to patients’ needs as quickly as possible.

Having looked at these waiting times, we can only conclude that if the UK wanted to reach U.S waiting times, public health spending would have to be much higher than £140 billion, thereby weakening the argument that single payer healthcare saves money. Given that us Britons have unquestioning allegiance to free healthcare, this fact would certainly hurt our pride.

Under the Blair government, it’s true that waiting times for appointments, for elective surgeries and other procedures were much quicker- but Blair also increased spending dramatically. According to the Royal College of Surgeons, there were 190,000 Britons every month waiting more than 18 weeks in 2015.

The VA system has also had its fair share of problems. According to the National Center for Veterans Analysis and Statistics, the Department of Veterans’ Affairs came up with expenditure tables for 2016. The Department of Veterans’ Affairs spent $63.4 billion. While there are 21 million Veterans in the U.S, most do not get medical care from VA hospitals. The Department of VA found that there were only 6 million unique patients; patients who received their care from the VA hospitals. This implies that health spending per Veteran is slightly over $10,000. $10,000 is not very high given that Veterans have all sorts of medical problems. However, the quality of care that Veterans is appalling. In 2014, there was a scandal. The scandal involved the VA attempting to cover up failures. The first cover up was manufacturing the waiting times for Veterans’ appointments. Then the VA only informed of legionnaires disease outbreak after a 1 year it happened.

Written By
Other Writer
More from Other Writer
President Donald Trump has repeatedly told the American people his trade war...
Read More

0 replies on “Myth That Health Outcomes and Costs Are Better In Socialized Healthcare Systems: Part 1- Rationing”