As we have seen earlier, single payer costs more than people think and health outcomes in the U.S are not worse than the UK and Canada.

A Closer Look at Healthcare Costs 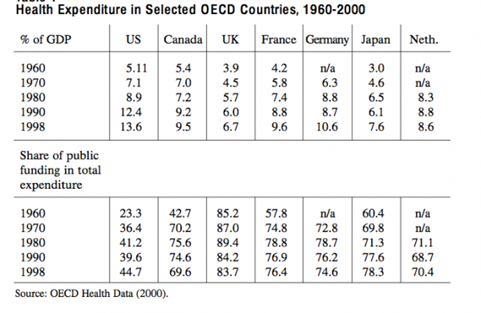 Above shows health expenditures in OECD countries between 1960 and 2000. Focusing specifically on health expenditure in 1960, we see that Canada spent slightly more than the U.S, while France and the UK spent less. In addition, public spending as a share of health expenditure is the lowest in the U.S at 23%. France and the UK spent less on healthcare and also had very high public expenditure (share of total spending). However, these countries spent less because their income per head were much lower than U.S incomes in 1960. In 1960, U.S GDP per capita was $2,881, French per capita income was just $1,320 and UK per capita income was $1,381. Therefore, the reason why the UK and France spent very little on healthcare was because they were much poorer than the U.S, not because they had a public healthcare system.

A more effective comparison is the U.S and Canada. As shown by the table, Canada spent 5.4% of GDP on healthcare, with 42% of healthcare spending coming from public spending. The U.S spent 5.1% of GDP, with only 23% of expenditures coming from government. Keep in mind that Canada’s income per capita in 1960 was $2,295, so not far behind U.S income. Therefore, the only other explanation for Canada’s higher healthcare spending is the fact that it had significantly higher public spending, therefore more spending come from third parties. As a result, Canada spent more on healthcare because individuals were paying less out of pocket.

Do Other OECD Nations Have Better Health Outcomes Than The U.S?

Breaking it down further, the UK and other European countries exclude children that are born as ‘severely underweight’. In other words, a new born that weighs less than 1,500 grams (1.5 kilograms) are not considered to be ‘live births’. Furthermore, most babies that die before the age of 1 are pre-mature, underweight babies that die in their first 28 days of life. As a result, the babies that are most likely to die are not even counted in European countries! This significantly deflates the overall number of infant deaths. Even Japan abuses the data. In Japan, if a baby dies within its first 24 hours of life, it is considered a miscarriage and not infant mortality. Once again, this skews the data because most babies die within the first 28 days of birth. Another category for babies is ‘very low weight babies’. This is when the baby’s weight is less than 1500 grams. Again, the U.S includes babies under 1500 grams as people, unlike the UK. In addition, babies that weigh less than 1,500 grams are extremely likely to die in their first month (28 days). The death rate for babies in the ‘very low weight’ category is 869 per 1000 in the first month alone. On the other hand, the U.S does not discriminate against any child. As a result, the U.S inflates the infant mortality figures. In addition, in many cases, babies that die in the first 28 days are usually unhealthy from the start. Therefore, there is nothing the U.S healthcare system or any healthcare system can do to remedy these defects.

Since the U.S includes these deaths as part of infant mortality and European countries do not, it is no surprise that the U.S has higher infant mortality. According to the Physicians’ Foundation in the U.S, 42 out of 52 babies that weighed 400 grams (0.9 lbs) that survived in 2015 (worldwide), were born in the U.S. This implies that not only are infant mortality figures skewed, but the U.S treats severely underweight/unhealthy babies better than Europeans. 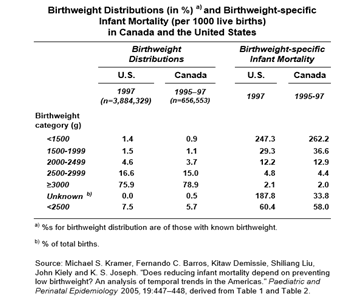 As shown by the table above, mortality rates are the same when you compare babies of the same weight class (right column). In fact, for new-born babies that are less than 2,000 grams, Canadians have higher infant mortality rates! This implies that Americans treat babies that are born underweight better than Canada. It therefore implies that the U.S healthcare system treats those who desperately need healthcare better.

In short, comparing infant mortality is like comparing apples and oranges. In fact, according to OECD infant mortality data for 2016, Slovenia had the lowest IMR at just 1.6 per 100,000. Given that Slovenia is significantly poorer than the U.S and U.K (in terms of GDP per capita), citizens cannot afford high quality healthcare nor does the government have the revenue to do so. Therefore, it implies the extent to which OECD nations are skewing and manipulating their infant mortality data.

Another comparison that proponents of socialized medicine point to, is the difference in life expectancy. According to the World Health Organization, in 2015, the UK had a life expectancy of 81.2 and the U.S had a life expectancy of 79.3 years. In fact, the U.S ranked among the worst in the OECD club of nations. However, this is not necessarily an indictment of its healthcare system. To start off, the U.S has a higher obesity rate than the UK. According to the Office for National Statistics, 27% of British adults were obese or severely overweight. In the U.S, according to the Centre for Disease Control, 36.5% of American adults were obese in 2014. The Centre for Disease control has also listed the effects of obesity. There are several health problems associated with obesity. This includes stroke, high blood pressure, heart disease and much more. These health problems all translate into premature death. According to the Centre for Disease Control, a 2014 report on pre-mature deaths found that there are 900,000 premature deaths (death before age 75) in the U.S out of a total 2.4 million deaths (source: United Nations). 34% of all premature death was heart disease. Given that obesity and heart disease are closely linked, countries with the highest obesity rates are likely to be affected more by premature death. As a result, countries with more premature death will reduce their life expectancy. Hence, this is not an indictment of the quality of care. If people have heart disease, type 2 diabetes because of poor diets/lifestyle, then there is little that doctors can do to remedy their health. One way to reduce the prevalence of heart disease, stroke, diabetes etc. is to increase the out of pocket spending in the healthcare system. This is because out of pocket spending means that consumers have an incentive to not consume so much healthcare. Improving diets and lifestyle would certainly reduce the need to go to the doctor (therefore reducing healthcare consumption), whilst also reducing risk of premature death. As a result, out of pocket spending and paying for your healthcare at the point of use could potentially prolong your life.

Written By
Other Writer
More from Other Writer
As we reported first thing this morning, one of the burning questions...
Read More

0 replies on “Myth That Health Outcomes and Costs Are Better In Socialized Healthcare Systems Part 2: Are You Sure Single Payer Saves Money and Lives?”