For many an age, a principal element of Britain’s strategy in its frequent wars with its Continental rivals was that of the naval blockade.

Throughout the long years of increasing mastery of the High Seas, the nation’s fleet admirals, frigate captains and often forcibly-impressed jack tars were frequently to be found, hovering just beyond the enemy’s horizon in order to deny their French, Dutch, or Spanish adversaries any freedom of navigation, whether for commercial or military purposes. Thus they aimed to limit their foes’ operational reach and slowly to bleed their economies dry.

Indeed, the one great defeat suffered by the British in a quarter of a millennium of oceanic predominance was partly the result of the fleet’s rare inability to secure its grip on the coastline of the Crown’s rebellious subjects in the American colonies – a failure partly due to sheer logistical difficulties and partly to the confusion of purpose which the simultaneous defence of the then more highly-prized Caribbean sugar islands entailed.

Nor was the lesson left unheeded by the newly-independent Americans whose Union forces employed the same approach to great effect during the bloody strife loosed by Southern attempts at secession, two generations after. Likewise, later still, Britain’s controversial ‘Hunger Blockade’ of Imperial Germany fostered – through its awful effects on a starving and disease-prone civilian populace – much of the latent ill-feeling which would erupt so horribly into a second, even less humane conflict, twenty-one years after the cessation of the first.

Indeed, such was the potency of this practice, that the very declaration of intent to apply it was to be taken as an overt act of war, a status which it retains to this day, even as the denial of international access has moved far beyond the merely physical and into the realms of the financial (and possibly the informational), as with present-day America’s aggression towards the likes of Russia and Iran.

Given all this, how is it then that that same America which is so quick to deny its designated ‘pariah states’ the fruits of open exchange is also so ready to blockade its own harbours and to sink (metaphorically, at least) not ships heading for, but coming from, a foreign port? For this is exactly what is implied by the current effort to exclude – or at least to seriously disadvantage – the import of those goods whose purchase its 328 million consumers and 34 million businesses had otherwise freely decided were advantageous to them to make, often on a daily basis.

Here, the parallel is perhaps best drawn with the truculent little Corsican whose spectacular series of battlefield triumphs, three centuries ago, had made him temporary master of all Europe. Frustrated that he could not come directly to grips with his inveterate British enemy, he thought to harm the interests of what he dismissed as ‘a nation of shopkeepers’ by interdicting their trade from the landward side, by means of the universal embargo he named his ‘Continental System’.

It is only a slight exaggeration to say that this monumental act of folly was a major contributor to his eventual overthrow, for the commercial classes who most keenly felt its thrust were both his own and those of the subject nations who were already rankling beneath the local misrule of Bonaparte’s sprawling, corrupt, and largely undistinguished kin and cronies.

Whole industries failed; time-honoured trading houses were ruined; ancient entrepots fell into windswept decay. Smuggling was rife and so suppression became ever more severe. Corruption was endemic and so respect for authority quickly evaporated. Already unpopular, economic contractions made requisitions and tax burdens even more insupportable while many an entrepreneur, banker and industrialist simply upped sticks and moved to the flourishing City of London. It has been calculated that French trade fell from its peak in 1806 – one attained just before the notorious Berlin Decrees promulgated the ‘System’ – to such a nadir that it was 1825 before it again reached the levels first seen in the last years of the Ancien Régime, way back in the late 1780s.

Worse yet, domestic discontent led the Russian Tsar to shake off his former personal infatuation with Napoleon and so take the first steps down the road to Borodino and beyond, a Via Dolorosa which would see the Corsican’s grandest of Grande Armées left shattered amid the icy blasts of the pitiless steppe winter – and all of Bonaparte’s vaulting ambitions along with it.

Setting aside the sweeping historical parallels, there seems little to be said in favour of the Trump Administration’s policies in this regard, in marked contrast to the positive, if tentative, steps it has taken toward deregulation and to the major lightening of the burden of taxation recently enacted.

Given that there can be no credible economist anywhere in the world who is in favour of the tariffs, there can only be two real motivations for what one might best greet – in a further nod to Imperial France – with the dismissal, ‘C’est pire qu’un crime: c’est une faute’ (‘It is worse than a crime: it is a blunder.’)

The first of these – by some way the more alarming of them – is that this is a manifestation of what the Chinese themselves have taken as referring to the ‘Thucydides Trap’: the concept that the existing hegemon will not in any way tolerate the emergence of a potential rival for its supremacy but will rather seek to eradicate it at the earliest juncture.

With China now in a position to pose just such a threat (as Beijing likes to flatter itself it does, to the avid endorsement of the Neocon armchair Attila’s who infest the Beltway), the US – some imagine – has therefore embarked upon the first phases of a prolonged attempt at containing, if not actually humbling, the Middle Kingdom.

For all our sakes – whether in terms of material prosperity or physical security – we must pray that those with their hands on the levers of powers (and their fingers on the Button) do not indulge in such rabid, think-tank paranoia or, just as bad, do not succumb to the temptation to harness it for short-term political ends. 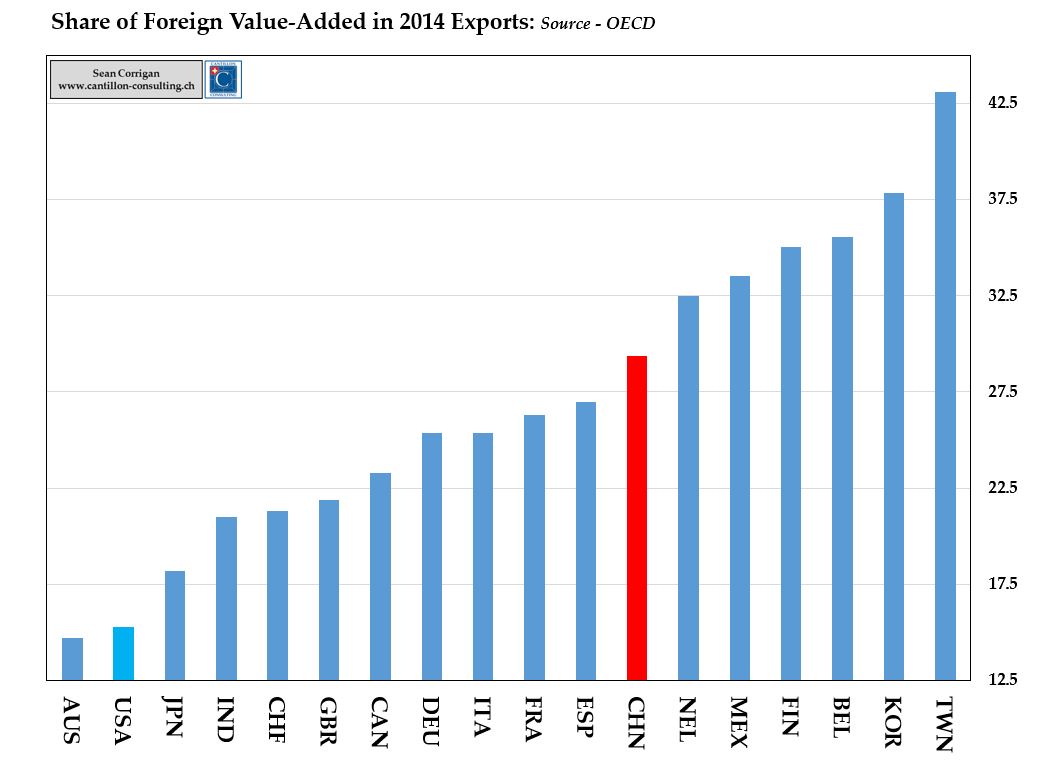 WHOSE EXPORTS ARE THEY, ANYWAY?    Ironically, a relatively high proportion of “China’s” exports derive their value elsewhere: 29% of the total and 37% of manufactures. The US, by contrast, only includes components amounting to 15% overall and to 22% of its domestic manufactures.

The second possibility – one which we can perhaps too readily persuade ourselves carries a small kernel of sense within it – is that all Trump is doing is drawing attention to the iniquities of the present system of ‘managed trade’ in the hope of provoking a bonfire of the rule-books and thus – somewhere in the not too distant future – to lower tariffs and lessened non-tariff impediments to trade in general.

Indeed, a sentiment of the sort was offered to us by the President himself at the beginning of his spat with those running that Continental System Mark II which is the European Union – a body whose hypocritical lip-service to the concept of ‘free trade’ is readily given the lie by the dire consequences which it and its many British hirelings warn will ensue for Perfidious Albion should she finally reject its smothering embrace and actually consummate the process of ‘Brexit’ after two long years of naked manoeuvring and determined obfuscation.

Here, however, we must be careful not to let the wish become father to the thought. Mr. Trump – as we have come to know – is not a statesman to whom we should look for much consistency of expression. His modus operandi is provocation and the off-the-cuff pronouncements through which he prosecutes it may sometimes be highly pertinent but are just as readily rejected in full, mere moments later, with his own self-contradiction being lost amid that thorny tangle of accusations of ‘Fake News’ which he has been so careful to construct as a cover for himself.

Is this, then, all merely a gambit? Is it just an attempt to call a spade a spade; to point out the cant and deceptive practices of the current order and hence to begin a move towards ameliorating some of its greater failings? Some small hint of that came when Secretary Mnuchin proposed a general abolition of all manner of barriers at the Buenos Aires G20, an offer reinforced in his superior’s later meeting with the European Commission’s bibulous president, if only to the most lukewarm of receptions.

One would dearly love to think this is indicative of the underlying aim, but long years of vindicated scepticism about politicians’ perceptions and priorities, both, make us hesitant to espouse such a view. And even if one were to suspend disbelief and temporarily to give the Devil his due in this context, the problem remains that such a policy of confrontation can all too easily escalate into something irretrievably counter-productive.

With paint-brushes everywhere moving firmly in the direction of corners, one must recall the feted aphorism of that most world-weary of political philosophers, Thucydides himself. The principle motives for conflict he says, in the kind of stark Realpolitik later expressed in the infamous Melian dialogue, are ‘times kai deous kai ophelias’ – ‘Fear, Honour and Self-interest’.

In the modern world, the first term we can allow to stand unaltered. For the second – not a word one might find wholly consonant with the holding of public office – we can substitute the loose synonym, ‘face-saving’. The third we can render as, ‘self-preservation’ – a skill at which such holders are usually most adept – or, worse, ‘self-advancement’, even ‘self-enrichment’ – also attributes not entirely foreign to those frequenting the corridors of power.

Given such observations, we can argue that President Trump’s approach risks triggering all three of these emotions among the targets of his attack, as well as aggravating the entrenched vested interests whom they affect to represent. Even if they have been launched with the best of intentions, therefore, his rockets’ red glare could all too easily set a spark in the powder-room and so ignite a conflagration it will prove very hard indeed to extinguish, once started in this way.

Written By
Sean Corrigan
More from Sean Corrigan
Continued from Part 1 … To recap the lesson we have drawn here:...
Read More

0 replies on “Trade Wars: Those damn’d torpedoes are OURS!”