“In 1961, at the height of the Cold War, a B-52 bomber carrying two Mark 39 thermonuclear bombs accidentally crashed in rural North Carolina. A low technology voltage switch was the only thing that prevented a 4-megaton nuclear bomb with 250 times the yield of the bomb dropped on Hiroshima from detonating on American soil. In addition to killing everyone within the vicinity of the blast, the winds would have carried radioactive fallout over Washington D.C., Baltimore, Philadelphia, and New York City. It is not inconceivable to imagine that, at the height of cold war, a weapon of that magnitude exploding randomly on the eastern seaboard would have triggered immediate accidental retaliation against the Soviets resulting in full scale Armageddon and the end of humankind as we know it. This is just one of many nuclear accidents during the cold war. Peace has a dark side.”

Say what ? Here are more details:

The date was 24 January 1961. The plane was a United States B-52 Stratofortress carrying two nuclear bombs, which lost altitude over Goldsboro, in rural North Carolina. With the plane having sustained a fuel leak in its right wing, the crew were advised to maintain a holding pattern along the coast while they burnt off as much fuel as possible. On reaching their assigned position it transpired that the leak had worsened and they were now running out of fuel. The crew were advised to return immediately to Seymour Johnson Air Force Base.

They never made it. They lost control of the plane at 10,000 feet as they began their descent. Five of the crew ejected and landed safely. One crew member ejected but was killed on landing. Two crew members died in the crash.

As the aircraft spun out of control, between 1,000 and 2,000 feet it parted company with its two 4-Megaton nuclear bombs. Arming mechanisms on one of the bombs activated, including charging its firing capacitors and deployment of a 100-foot-diameter parachute.

In all, of six of the bomb’s arming mechanisms, five of them triggered. Only a low technology voltage switch prevented a 4-Megaton bomb accidentally detonating on US soil.

Lt. Jack Revelle, the bomb disposal expert sent in to disarm the bomb, commented in 2011,

“As far as I’m concerned we came damn close to having a Bay of North Carolina. The nuclear explosion would have completely changed the Eastern seaboard if it had gone off.”

The bomb would have destroyed everything within a 17-mile radius. A declassified document written by Parker F. Jones of Sandia National Laboratories somewhat understatedly concluded that “The MK 39 Mod 2 bomb did not possess adequate safety for the airborne alert role in the B-52.”

The Goldsboro incident is one which features in Michael Lewis’ new book, The Fifth Risk, which amounts to a paean of praise for enlightened government, and which will likely drive most libertarians a little mad. Any new Michael Lewis book is admittedly a cause for celebration, even one as diaphanous as this one. (Two of its three parts are rewarmed pieces from Vanity Fair and the third was originally an audiobook.) Though as pleasing to read as ever, it is a light confection, and can easily be consumed in its entirety at one sitting.

The problem is highlighted by Lewis’ take on Goldsboro:

“The reason it’s worth thinking about this.. is the reason that bomb didn’t go off was because of all the safety devices on the bombs, designed by what is now [the Department of Energy].”

Well, two can play at this game. The US government built the damn bomb in the first place, and it built the six arming mechanisms on it, five of which failed. Being ‘glass half full’ about the benign role of Big Government and Uncle Sam hardly does the anecdote full, nuanced justice.

The Fifth Risk in question is described as ‘project management’. We would define it, only somewhat differently, as ‘mission creep’. It was a revelation, for example, to learn that a single sub-division of the USDA had spent nearly a trillion dollars feeding Americans. The attitude of ‘the right’ to this development in social affairs can perhaps best be summarised in the US bumper sticker below: 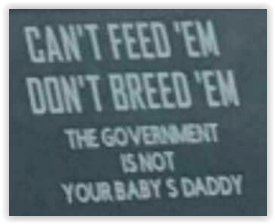 A man who is holding down a menial job and thereby supporting a wife and children is doing something authentically important with his life. He should take deep satisfaction from that, and be praised by his community for doing so. If that same man lives under a system that says the children of the woman he sleeps with will be taken care of whether or not he contributes, then that status goes away. I am not describing a theoretical outcome, but American neighbourhoods where, once, working at a menial job to provide for his family made a man proud and gave him status in his community, and where now it doesn’t. Taking the trouble out of life strips people of major ways in which human beings look back on their lives and say, “I made a difference.”

We come, not to bury Michael Lewis, but to praise him. The apparent journey just seems a little odd – from Salomon Brothers’ bond salesman to idol of the liberal left. Especially given the role that out of control government spending and consequent debt accumulation has had, and will have, on global financial markets for the foreseeable future.

As this interview with the economist John Hearn reminds us, and as Michael Lewis takes pains to reaffirm, there are certain services that government provides because the private sector can’t or won’t. They include street lighting, the military, air traffic control, national highways and food safety guidelines. But there’s a monumental gap between the cost of these “essentials” and what government burns through every year. It’s difficult to run up a gross national debt of over $21 trillion on street lights alone, especially given that there’s a tax take on the other side of this equation.

What’s our point ? A very simple one, really. The West is suffering from a crisis of confidence in government. In the UK we can put that down, in part, to Brexit. The people have voted for something that Parliament doesn’t support. That represents something of a democratic problem. In the US, Americans have somehow managed to install a wrecking ball as President. For all that President Trump can be appreciated on the basis of those he most thoroughly aggravates, these are not healthy bodies politic. Let’s not even get started on the EU.

Yes, ‘mission creep’ comes close to defining the problem. Most of us surely just want to get on with our lives with the minimum of fuss and the minimum of footling regulation – all of which comes at a price. Instead we are being collectively suffocated under a supposed comfort blanket of regulatory interference and oppression. Britain’s Conservative government gives every sign of having been mysteriously severed from its ‘small State’ source code and now seems determined to prescribe the size of pizzas and what qualifies as non-criminal hate crime and how much taxpayers’ money can be hosed at the NHS in a futile attempt to compete with an unashamedly Marxist Labour Party.

It has been well said that a democracy cannot exist as a permanent form of government. It can only exist until the majority discovers it can vote itself largesse out of the public treasury. After that, the majority always votes for the candidate promising the most benefits with the result that the democracy collapses because of the loose fiscal policy that ensues, always to be followed by a dictatorship.

All going according to plan, then.