The US debt ceiling suspension, signed on February 2018, expires in March this year. According to some experts, the US Treasury will have to carry out special measures because of possible delays in raising this ceiling. Treasury would need to draw down its deposits with the Fed and deposit the money in various banks for future use to pay government expenses. As a result, this would boost monetary liquidity and therefore would have beneficial effects on financial markets.

The meaning of monetary liquidity

Whilst many people talk about money and liquidity interchangeably, the reality is these are both very different concepts. Whilst the term money simply refers to the supply of money, the term liquidity relates to the interplay between the supply of and the demand for money.

People demand money primarily in order to facilitate trade. By means of money, a product of one specialist is exchanged for the product of another specialist. The nub of what makes a particular thing money (i.e. a medium of exchange) is that it offers to its holder a greater purchasing power than any other good. Money (being the most marketable entity) enables an individual to secure a greater variety of goods than any other good could do i.e. it has a much greater purchasing power. Therefore, when people seek more money they do not want more money in their pockets but, rather, more purchasing power.

Note that liquidity is the difference between the growth rates of the supply of money versus the demand for money.

The most common components that drive changes in the demand for money are changes in output and price inflation.

Changes in liquidity affect markets with a time lag

Given that fluctuations in liquidity exert their effect on markets for goods and assets with a time lag, we should expect that changes in the prices of various goods and financial assets would follow changes in liquidity.

Monetary growth and liquidity – are they positively correlated?

For instance, if the money supply fell by 10% and were accompanied by a decline in economic activity by 10% and a decline in price inflation by 5%, this would then result in an increase in liquidity by 5%, calculated as follows:

Historically there have been notable occasions when money supply and liquidity have not moved in tandem. Between October 1929 and July 1932, for example, the yearly growth rate of money supply plunged from 8.3% to minus 14.5% whilst during the same period liquidity increased from 0.2% to 26.5%. In addition, during the period October 1970 to August 1972 the yearly growth rate of money supply increased from 5.5% to 6.1%. During that period, liquidity fell from 6.3% to minus 7.9%.

Assessing prospects for the S&P500 from a liquidity perspective

Even if various commentators are correct and the US economy faces massive increases in money supply growth during Q1 because of government expenditure, we suggest that this may not have a strong impact on financial markets.  Because changes in money supply and liquidity affect markets with a lag the trajectory of financial markets in the current (March) quarter is already largely determined by previous changes in liquidity. 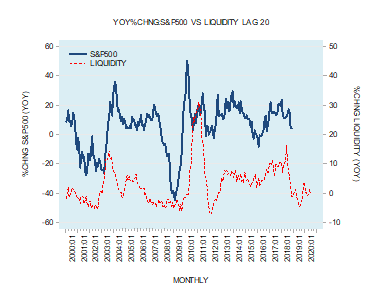 0 replies on “The Difference between Money Supply & Liquidity”