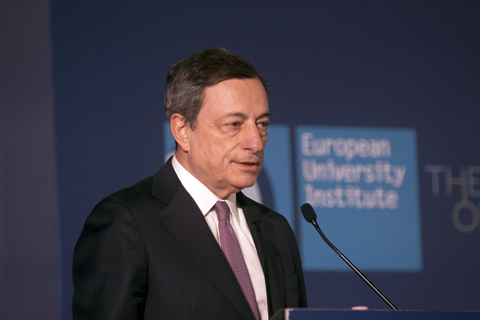 On March 25, 2020, with the world economy paralyzed, Mario Draghi emerged into the spotlight for the first time since stepping down as president of the European Central Bank (ECB). In an article for the Financial Times, he shared his views on how the devastating global slowdown, provoked by measures to contain the COVID-19 pandemic, should best be handled by governments and central banks.

Between 2011 and 2019, Mr. Draghi boldly navigated the eurozone through a cascade of systemic crises, each one scarier than the last. During his mandate at the helm of the ECB, he proved time and again that leaders and financial markets put tremendous stock in his words. In the summer of 2012, at the peak of the Greek debt crisis, Mr. Draghi famously committed to doing “whatever it takes” to stabilize government bond markets in turmoil.

Still bound by the strict “cooling-off” rules imposed by the ECB on its former top executives, he could not speak as freely as he might have wished. Nonetheless, without specifically mentioning either current ECB head Christine Lagarde, the eurozone or the ECB itself, Mr. Draghi gave some powerful and potentially far-reaching advice to the bank’s current president.

Many of Mr. Draghi’s recommendations address the ECB’s response to the coronavirus crisis, which boils down to calibrating a cocktail of mutually reinforcing monetary policy measures. Some of these tools have been created specifically to combat the economic fallout of the crisis. These include the Pandemic Emergency Purchase Program(PEPP), which has 750 billion euros at its disposal.

Others are drawn from the ECB’s impressive, previously tested, toolkit. For example, an extra 120 billion euros has been added to the bank’s ongoing net Asset Purchase Program (APP). Current weekly purchase volumes already exceed the levels the ECB had implemented at any time during the Draghi presidency, including the heyday of quantitative easing (QE) when purchases were running at a monthly pace of up to 80 billion euros.

Mr. Draghi implies that the ECB is doing the right things, but may need to do more. In addition to providing extraordinary liquidity support to hibernating economies, he recommends a fiscal “whatever it takes” adapted to circumstances he likens to a “war”: billions of people fearing for their lives, tens of thousands or more dying from the virus. This is a “human tragedy of potentially biblical proportions,” he writes.

Following the war motto that extraordinary times call for extraordinary measures, Mr. Draghi urges states to act with strength and speed. They have a duty to “protect citizens and the economy,” he says. “The key question is not whether but how” governments should use their balance sheets to absorb the losses incurred by the private sector. He implores them to deliver direct, substantial aid to businesses and households by, for example, providing a basic income for those who lose their jobs, postponing taxes and reducing bureaucratic hurdles.

Consequently, Mr. Draghi predicts exorbitant public debt levels to become a “permanent feature of our economies.” That should not bother us, according to him. If central banks operate as lenders and liquidity providers of last resort, fiscal unsustainability is a misplaced concept, he implies. All that matters now is that governments spend, spend, spend.

‘Whatever it takes’ part two

This “change of mindset” advocated by the former ECB president (who, we should not forget, was part of the Troika that imposed years of harsh fiscal austerity on bailed-out countries during the European sovereign-debt crisis) places his successor in a nearly impossible position. He expects Ms. Lagarde to act as a wartime president, ready to suspend everything the ECB stands for – even its own political independence.

Yet as he himself recalled in a speech in June 2019, the Treaty on the Functioning of the European Union defines the ECB’s mandate as “to maintain price stability.” This narrow definition does not include conducting fiscal policy.

On March 12, 2020, the day after the World Health Organization declared COVID-19 a pandemic, Ms. Lagarde insisted that it is the responsibility of governments, not the central bank, to protect highly indebted eurozone countries. Her words stood in stark contrast to those of her charismatic predecessor. Ms. Lagarde refused to send a signal like the one Mr. Draghi sent in 2012, saying she did not seek to do “whatever it takes, number two.”

Within minutes, what she said – or, rather, failed to say – triggered a panic sell-off of Italian bonds, sparking fears of a new euro crisis at the height of a health catastrophe. “We are not here to close spreads,” she stated, adding that “there are other tools for that and other actors to deal with those issues.”

From a formal and legal perspective, she was right. But, from a communications standpoint, many considered her statement a terrible faux pas. Some accused her of grossly underestimating the gravity of the situation.

She eventually backtracked a few hours later, declaring that she was “fully committed to avoid any fragmentation in a difficult moment for the euro area.” Her reassuring words (and, more importantly, the generous stimulus packages, including PEPP, which were announced on March 18), calmed bond markets, avoiding a crash. But the threat to the eurozone is far from over.

Consequently, on April 22, the ECB changed its rules so that it could accept bonds downgraded to junk status as collateral. The idea was to limit the financial chaos likely to occur when investors start sanctioning sovereigns that appear indebted beyond any possibility of repayment.

It may be very well for the retired ECB president to plead for ever more stimulus, but the question is how Ms. Lagarde could further ease monetary policy after almost a decade of extraordinary QE. There is not much ammunition left.

Shortly before retiring, Mr. Draghi had reopened the cheap-money tap once more. He made sure that, as of November 1, 2019 (the day Ms. Lagarde took over as president of the ECB), the net APP restarted at a monthly pace of 20 billion euros for an indeterminate period of time. Deposit rates were cut further into negative territory, to -0.5 percent.

Mr. Draghi’s farewell gift to the eurozone was heavily criticized inside and outside the ECB. Even his closest supporters said there was no need for more stimulus at a time when the economy had largely recovered. Critics further warned that ultra-accommodative monetary policy, if conducted over so many years, seriously limits the central bank’s room for maneuver if a major recession strikes – precisely the situation we find ourselves in now.

Another problem with perpetually extraordinary monetary policy is that more and more needs to be done to achieve increasingly little. During the eight-year Draghi era, the ECB pumped tremendous volumes of liquidity into the eurozone economy, without much effect. Inflation consistently came in under the 2 percent target and growth rates remained mediocre.

Why should QE work now? How much more cheap credit needs to be pushed into an economy already flooded with liquidity for the stratagem to finally work?

Still, with the coronavirus crisis reaching acute levels, Ms. Lagarde did not have much of a choice. Immediate and enormous liquidity support was necessary to keep what had started as a health and economic crisis from mutating into a “full-blown financial crisis, with self-fulfilling and destabilizing price spirals and fire sales,” as ECB Executive Board Member Isabel Schnabel explained.

Indeed, within a few days, the pandemic had dangerously reversed the previous easing in financial conditions. The situation “threatened to unleash a perilous macro-financial feedback loop” that, if left unaddressed, would have “endangered financial stability” in the eurozone, Ms. Schnabel said.

In Mr. Draghi’s post-pandemic scenario, the commercial banking sector has a key role to play as a “vehicle for public policy.” Banks can create money instantly by granting new loans or allowing overdrafts of existing loans. Therefore, they must be able to lend without delay and “at zero cost” to firms struggling to maintain their workforce. Borrowers’ credit risk should not be a concern. Governments need to stand ready to provide all the capital banks need to perform their task, notably “in the form of state guarantees.”

What Mr. Draghi does not address is the issue of “zombification” and overheating of the European economy, phenomena that would worsen due to his recommendations. “Zombies” – over-indebted firms that have just enough revenue to continue operating but are unable to ever pay off their debt – constitute a considerable risk for private investors, global asset markets and the economy in general. A large-scale “zombie infestation” could precipitate a serial implosion of the bubbles central bankers have been inflating over the past decade.

In his article, Mr. Draghi offers an interesting proposition: the “cancellation of private debt.” Were the lockdowns to last much longer, he writes, entrepreneurs could keep their businesses alive only if the debts they raised to deal with the crisis were wiped out. The problem is how to distinguish the healthy firms made unstable by the lockdowns from the unproductive zombies.

Back to the future

Another priority for Mr. Draghi is that banks should be allowed to use “all the space needed” in their balance sheets. “Neither banking regulation nor collateral rules” should stand in the way of banks in the corona-crisis world, he writes.

Allowing banks to use their capital and liquidity buffers would, however, be a serious concession. Such capital requirements and other banking regulations have become central pillars of the post-global financial crisis world, aimed at strengthening the banking sector.

Is Mr. Draghi throwing away the baby with the bathwater? He was the one who built a huge supervisory edifice at the ECB (the Single Supervisory Mechanism, or SSM). He played a key role in drafting a myriad of far-reaching EU banking regulations, such as the Capital Requirement Directives (CRDs), as well as the Bank Recovery and Resolution Directive (BRRD), which prohibits bailing out failing banks with taxpayer money.

Furthermore, he was the Chair of the Group of Governors and Heads of Supervision (GHOS) that in December 2017 finalized the Basel III regulations, so far the most demanding global regulatory framework on bank capital adequacy, stress testing and market liquidity risk.

Would he now be ready to sacrifice the hard-won safety of the banking sector? Would he risk compromising the SSM’s unrelenting efforts to force banks to clean up their balance sheets and get rid of billions of nonperforming loans – their dangerous legacy of the 2008 crash?

On March 12, the ECB relaxed existing banking regulations by lowering banks’ capital requirements for the first time since the SSM’s creation in 2014. Also, the ECB recently expanded its targeted longer-term refinancing operations (TLTROs) to heavily subsidize lenders. To make lending even more attractive for banks, it will lend money to them at a rate of -0.75 percent and, as of June, -1 percent. Eventually, the ECB might also consider buying banks’ short-term debt – something unthinkable so far.

Will the tremendous government and corporate debt amassed during the lockdown ever be paid back? This is the final critical issue that Mr. Draghi slyly avoids. He seems confident that, once the coronavirus crisis is over, a form of normality might eventually return, and with it, fiscal consolidation.

It is nonetheless difficult to imagine that, without a significant rise in inflation, governments could take on these huge debts and reemerge unscathed. Mr. Draghi does not use the word “inflation,” but hints that interest rates might not rise anytime soon – which could well mean that inflation, or rather, stagflation, is a possibility.

Elisabeth Krecké is a Professor of Economics at Aix Marseille University, France.