Much has been written about the economic consequences of Covid-19, yet, just as in many of the analyses of the Great Depression and the 2008 crisis, the years of accumulating debt preceding the event do not attract the attention they deserve. Covid-19—or to be more precise, the lockdown—has initiated a cascading liquidation of the debt bubble which has been building for a generation. From the early 1980s, each recession has been responded to with iteratively lower interest rates. Following the bursting of the late-1980s credit bubble, Greenspan inaugurated the loosest monetary policy for a generation, creating the Dot Com Bubble. When this burst in 2000, it was responded to with even lower interest rates, reaching 1% from 2003-4, generating the Housing Bubble. When this burst in 2007/8, the response was zero percent interest rates, turning a $150 trillion global debt bubble as it was then—already the largest In history—into a $250 trillion global debt bubble.

At the Cobden Centre we have organised many talks around the world on the nature of the debt bubble, including in the European Parliament, the Bank of England and the OECD headquarters. When central banks set interest rates it fundamentally distorts the pricing mechanisms of credit markets, just like price setting in other parts of the economy. Friedrich von Hayek won the Nobel Prize in 1974 for articulating that interest rates, like other prices, should be set by the market rather than central planning committees. We are not surprised when the government setting the price of food in Venezuela leads to food shortages so we should not be surprised that zero percent interest rates have led to a $250 trillion global debt bubble. Below is a speech I gave in the European Parliament in 2018 in which I adumbrated these points for a political audience:

With each wave of artificially low interest rates, generating ever more distortionary monetary effects, bond quality has fallen concomitantly, as shown by OECD research in 2019.  We are now at the stage where low-quality debt, rather than being the exception, has metastasised through much of the economy.

Figure 1: Effective Federal Funds Rate. Source: Board of Governors of the Federal Reserve System (US)

Figure 2: Bond quality from data compiled by the OECD (2019)

While debt quality has fallen, we have seen a proliferation of so-called “zombie companies”. Research at the Bank for International Settlements showed a cyclical growth in zombie companies from 2% of companies in the late 1980s to 12% in 2016, corresponding empirically to the waves of artificially low interest rates. The BIS, in its well-written 2018 paper, noted that:

“Lower rates boost aggregate demand and raise employment and investment in the short run. But the higher prevalence of zombies they leave behind misallocate resources and weigh on productivity growth….Our study cannot answer this question. We leave the exploration of this trade-off to future research.”

The “boost” to the economy is the very same poison that makes it worse. Artificially low interest rates send false price signals to markets: debt goes up, savings go down and resources are directed from productive uses to more interest rate-sensitive, debt-fuelled sectors (including, of course, financial speculation). 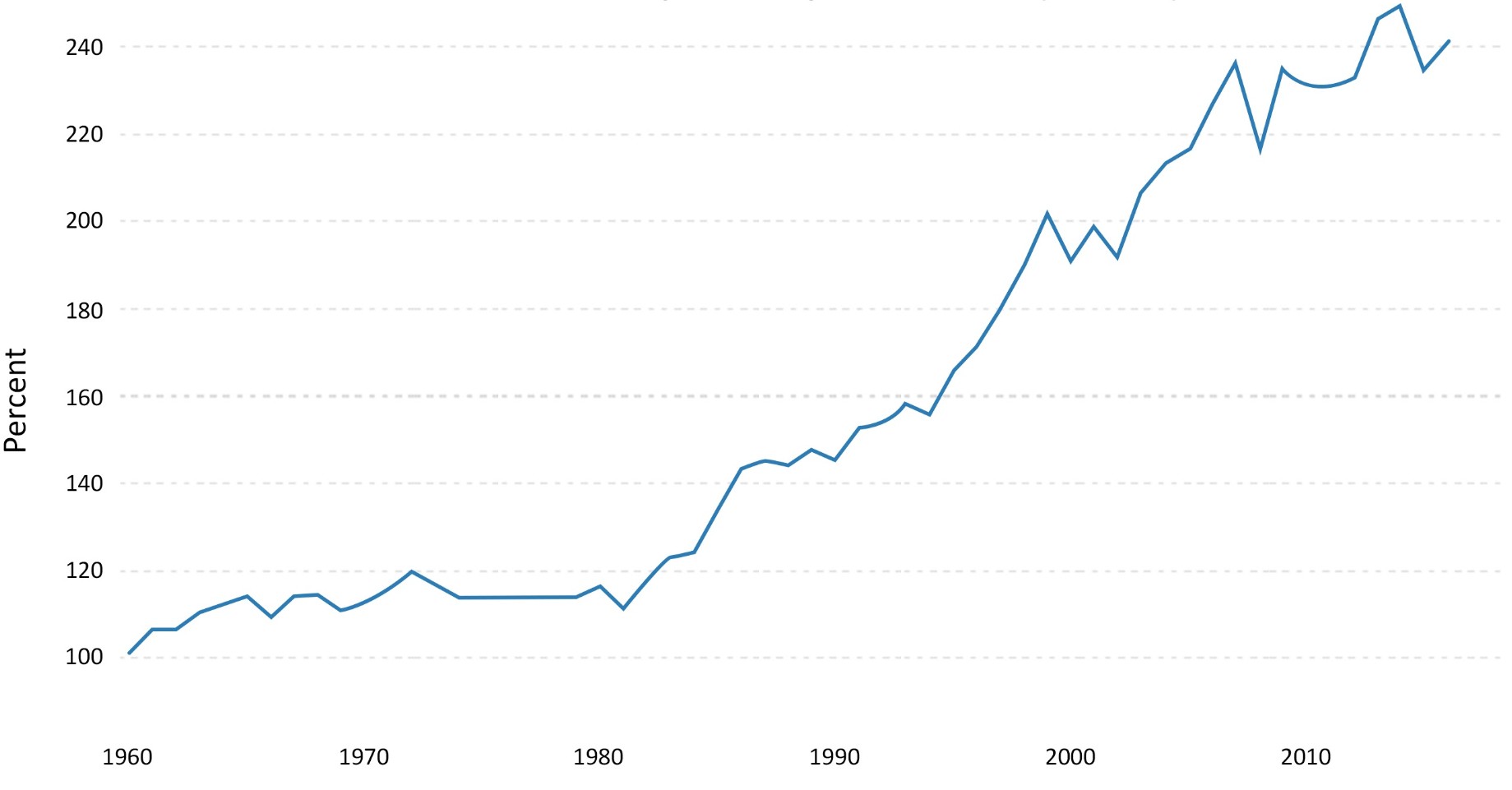 A lot of attention has been paid to stock market bubbles and housing bubbles during this period, yet the bubble is in fact an aggregate asset bubble which has had a series of different instantiations. Young people cannot buy houses, P/E ratios are at similar levels to 1929, but almost all assets have been inflated by artificially cheap credit in a series of waves corresponding to the waves of lower interest rates. 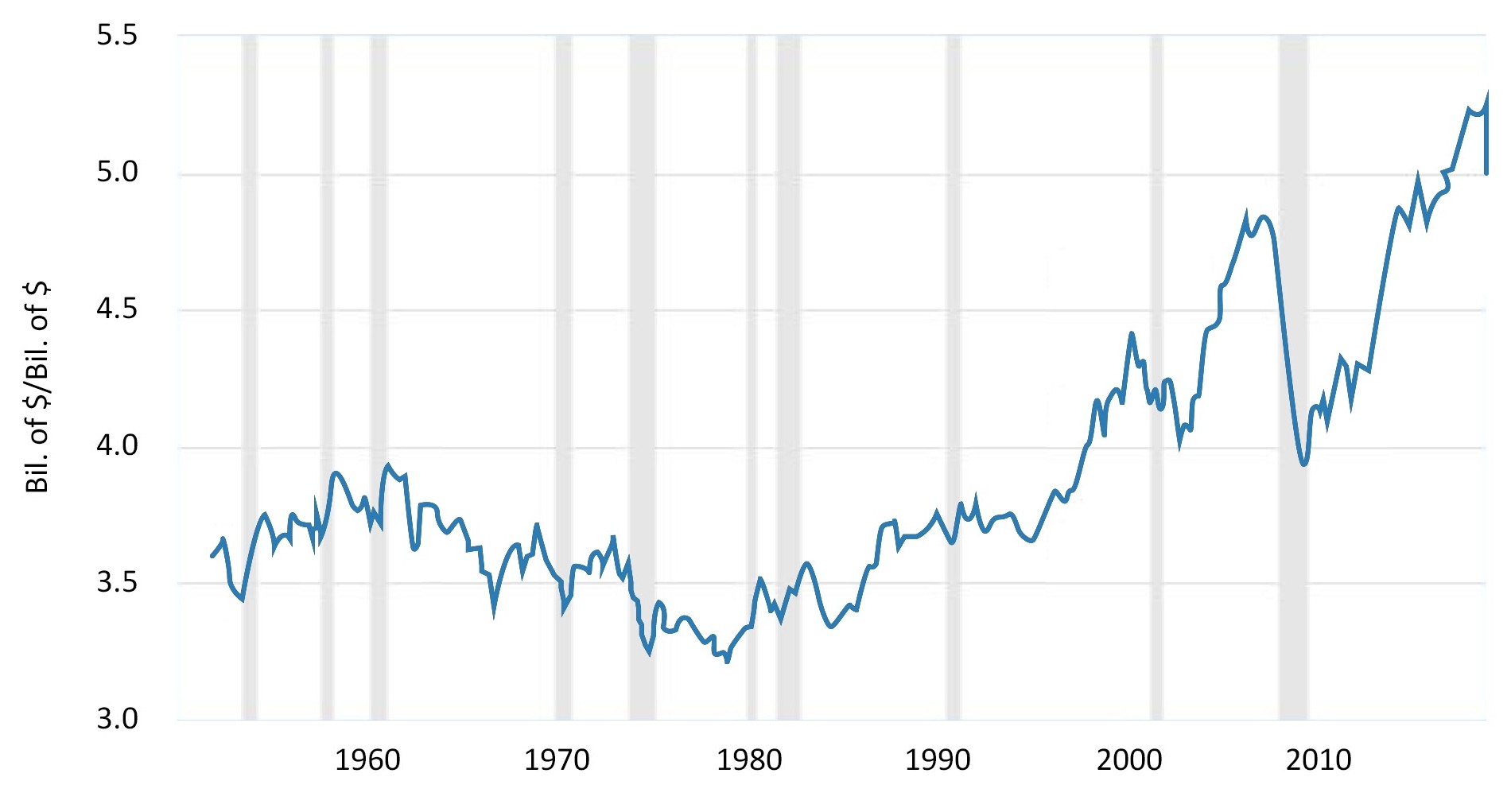 Figure 4: Households and nonprofit organisations’ net worth, Level/GDP. Sources: BEA, Board of Governors of the Federal Reserve System

The virus was not predictable, but what is happening to the economy is entirely predictable. Sooner or later something was going to burst the bubble. To appropriate Rumsfeld’s famous monologue, what is happening now is a “known unknown” rather than an “unknown unknown”. It could also have been a war or terrorist attack that brought about the bursting of the bubble; indeed, it would have burst at some point by itself, just as it began to burst in 2008.

Most of the policies pushed by the establishment over the preceding decade have made things worse. Zero percent interest rates, bailouts, preserving zombie companies, quantitative easing and encouraging debt-fuelled consumer spending as a path to economic growth.

At the Economic Freedom Summit in the European Parliament in 2018 I had a debate with the head of IMF Europe on policies following the economic crisis. The position of the establishment is clear: central banks saved the day. I made the case that most of the metrics were worse 10 years after the crisis than they were in 2008—debt levels, zombie companies, financial speculation and transfers of wealth from hard-working, productive people to spivs who know how to play the game created by an extractive system.

What Is To Be Done?

When we give seminars at central banks, the OECD and elsewhere we make the case that interest rates should be set by the market rather than central banks and that zero percent interest rates have made things worse since 2008. One of the responses was interesting: “what would you expect us to do, just let the whole thing collapse?” We are now entering Act V of the bubble — negative interest rates. Negative interest rate mortgages have already been given in Denmark. Once interest rates go negative—a complete aberration for the principles of market economics—the nature of debt will fundamentally change. But it will collapse. Covid-19 has seen to it that the bubble inflated by zero per cent interest rates will collapse shortly, but the level of accumulated malinvestment means that negative interest rates will not have the steroidal effect that is hoped for. It will deliver another few years of sub-par debt-fuelled economic activity—I hesitate to call it “growth”—before an even larger debt liquidation becomes necessary.

Just two generations ago governments in Britain, the US and elsewhere engaged in widespread price-fixing including fuel, wages and consumer goods. The abject failure of those policies was a painful lesson to learn, but the most important lesson of all will soon be delivered—interest rates, like other prices in a capitalist economy, should be set by the market rather than by central planning committees.

Written By
Max Rangeley
More from Max Rangeley
[Editor’s Note: this is from the World Dollar Foundation, and can be...
Read More

0 replies on “The Chain Reaction Is Now In Process”