Three short primers for readers of any level of prior expertise:

Longer books follow below for those who may be expert in the present economic and financial system but who wish to rethink money, economics and the business cycle from a fresh perspective.
Booms and busts are not endemic to the free market, argues the Austrian theory of the business cycle, but come about through manipulation of money and credit by central banks. In this monograph, Austrian giants explain and defend the theory against alternatives. Includes essays by Mises, Rothbard, Haberler, and Hayek. In his later years, Professor Haberler distributed many of these monographs to friends and associates.The Austrian Theory of the Trade Cycle and Other Essays, a slim volume of just 120 pages. The first, 10-page essay is vital reading:

Prices and Production and Other Works — The essential exposition of a robust capital theory:

Hayek was not only a leading champion of liberty in the 20th century. As this massive book reveals, he was also a great economist whose elaboration on monetary theory and the business cycle made him the leading foe of Keynesian theory and policy in the English-speaking world. Here are collected his most important works on these topics: re-typeset, indexed for the first time, and beautifully bound in a 536-page hardbound book for the ages.

These works have been tragically out of print for many years. Together they constitute a complete presentation of Hayekian money and business cycle theory. Even more, they work together as an excellent elucidation of Austrian macroeconomic theory, which is why this book has already been adopted in some classrooms.

The timing could not be better. The entire world economy is now suffering from the effects of bad monetary policy, and with results that Hayek explains in great detail. With “counter-cyclical” policy again revealed as unworkable, and while the politicians plot to make matters worse, the contents of this book has direct bearing on present and future of monetary policy.

In The Causes of the Economic Crisis, Mises forecasts and explains the breakdown of the German mark and the market crash of 1929:

In the world before and after the Great Depression, there was a lone voice for sanity and freedom: Ludwig von Mises. He speaks in The Causes of the Economic Crisis, a collection of newly in print essays by Mises that have been very hard to come by, and are published for the first time in this format.

Here we have the evidence that the master economist foresaw and warned against the breakdown of the German mark, as well as the market crash of 1929 and the depression that followed.

He presents his business cycle theory in its most elaborate form, applies it to the prevailing conditions, and discusses the policies that governments undertake that make recessions worse. He recommends a path for monetary reform that would eliminate business cycles and provide the basis for a sustainable prosperity.

In foreseeing the interwar economic breakdown, Mises was nearly alone among his contemporaries. In 1923, he warned that central banks will not “stabilize” money; they will distort credit markets and generate booms and busts. In 1928, he departed dramatically from the judgment of his contemporaries and sounded an alarm: “every boom must one day come to an end.”

Then after the Great Depression hit, he wrote again in 1931. His essay was called: “The Causes of the Economic Crisis.” And the essays kept coming, in 1933 and 1946, each explaining that the business cycle results from central-bank generated loose money and cheap credit, and that the cycle can only be made worse by intervention.

Did the world listen? The German-speaking world knew his essays well, and he was considered a prophet, until the Nazis came to power and wiped out his legacy. In England, his student F.A. Hayek made the Austrian theory a presence in academic life.

In the popular mind, the media, and politics, however, it was Keynes who held sway, with his claim that the depression was the fault of the market, and that it can only be solved through government planning.

Just at the time he wanted to be fighting, Mises had to leave Austria, forced out by political events and the rising of the Nazis. He wrote from Geneva, his writings accessible to too few people. They were never translated into English until after his death. Even then, they were not circulated widely.

The sad result is that Mises is not given the credit he deserves for having warned about the coming depression, and having seen the solution. His writings were prolific and profound, but they were swallowed up in the rise of the total state and total war.

But today, we hear him speak again in this book.

Money, Bank Credit, & Economic Cycles — A comprehensive treatment of the root causes of economic crisis and how to improve matters through a return to sound legal principle:

A complete comprehensive treatise on economic theory, the book is sweeping, revolutionary, and devastating – not only the most extended elucidation of Austrian business cycle theory to ever appear in print but also a decisive vindication of the Misesian-Rothbardian perspective on money, banking, and the law.

De Soto provides also a defense of the Austrian perspective on business cycles against every other theory, defends the 100% reserve perspective from the point of view of Roman and British law, takes on the most important objections to full reserve theory, and presents a full policy program for radical reform.

Buy from the IEA or read online here. 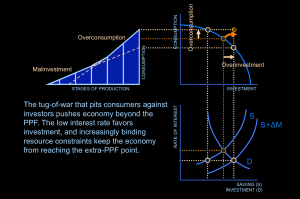 For convenience, this page can be referenced as tr.im/ccprimer or bit.ly/ccprimer.