This blog thread has been very rewarding. There are over 70 useful contributions. Most say, “yes we know the government is debasing us, but as they need to do that to survive, and no one can explain it in simple terms to the people, there will not be the political will or the will of the people to change it.” Considering the fact that the majority of the economy (52%) is now the state, and that turkeys do not vote of Christmas, they reckon we will be stuck with the current system.

I do not believe that will be the case. In this report, the Bank for International Settlements lay out their predictions concerning the UK debt. By 2040, they are reckoning on a national debt being 500% of GDP. Even on the optimistic Treasury forecasts, it will be £1.5 trillion by the end of the next parliament which will still be 7% of GDP. This is the Elephant in the room.

Liam Halligan has picked up on this too. In his article he refers to a graph from the BIS report, which the Telegraph website fails to produce: 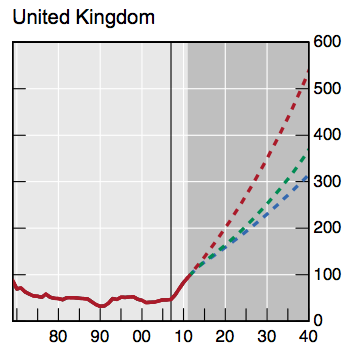 The only solution, as no political party yet is prepared to grasp the nettle and deal with both the deficit AND the national debt itself, will be to debase our money on such a scale that would make Gideon Gono, Mugabe’s Central Bank governor, very happy!

So I think this will happen sooner rather than later. What I am saying is that there will be a Sterling crisis, and a system wide default on the debt obligations of the nation. The current course is simply unsustainable.

This is when all who are interested in Honest Money should be ready with solutions that have already been worked out and debated with the political class.

A Note on the Morality of a Government Bond

A bond issued by the government is a promise to pay the purchaser a coupon and the capital back at a predetermined term(s) in the future. Thus the government, whose only source of revenue is its subjects can wilfully extract more of our wealth on an ongoing basis to pay for these obligations. Is this slavery? Would we shed a tear if slave owners did not get compensated upon abolition? I would not.  Monetising the debt is dishonest as slavery is dishonest.

However, I do accept that the majority of people buying fixed income from the state have no idea what they are getting involved with, and thus they should have their obligations met wherever possible. Following a Sterling crisis, we should advocate constitutional amendments to stop this practise recurring in the future.

One reply on “More Posted to the ASI Blog”