In its September 21 meeting Fed officials expressed concern that the US rate of inflation is far too low. Also, on Friday the Fed chairman hinted that the US central bank is ready to push more money to reverse the slide in the growth momentum of the CPI in order to revive the economy. We suggest that if the pool of real savings is declining then even if the Fed were to be successful in dramatically increasing the price level the economy will follow the declining pool of real savings. In this situation the more money the Fed pushes the worse the economic conditions become. In the meantime, the yearly rate of growth of our US monetary measure increased visibly in early October. We suggest this bodes well for the stock market in the months ahead. A strong liquidity build-up also remains bullish for the US Treasury bonds market. A fall in the growth momentum of monetary liquidity in the Euro-zone, the UK and China poses a threat to stock markets there. The price of gold continues to push ahead. Our model raises the likelihood that for the time being the up-trend in the price of gold is likely to stay intact. 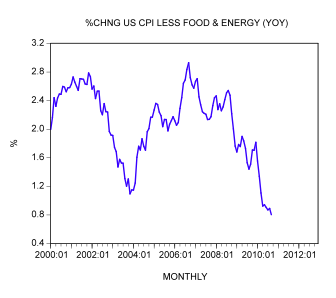 In its September 21 meeting the Federal Reserve Open Market Committee expressed concern that the rate of inflation is far too low. According to the minutes some members of the FOMC have said,

That unless the pace of economic recovery strengthened or underlying inflation moved back toward a level consistent with the Committee’s mandate, they would consider it appropriate to take action soon. With respect to the statement to be released following the meeting, members agreed that it was appropriate to adjust the statement to make it clear that underlying inflation had been running below levels that the Committee judged to be consistent with its mandate for maximum employment and price stability, in part to help anchor inflation expectations…….the Committee was prepared to provide additional accommodation if needed to support the economic recovery and to return inflation, over time, to levels consistent with its mandate.

Meanwhile on Friday October 15 Federal Reserve Chairman Ben Bernanke hinted that the US central bank is ready to push more money into the economy in order to reverse the present slide in the growth momentum of the consumer price index. He said that the low level of inflation presented a risk of deflation. “There would appear, all else being equal, to be a case for further action”, Bernanke said at a conference sponsored by the Boston Federal Reserve Bank.
The yearly rate of growth of the consumer price index (CPI) stood at 1.1% in September against 1.1% in the month before and 2.6% in January. The yearly rate of growth of the CPI less food and energy – the core CPI – stood at 0.8% last month versus 0.9% in August and 1.6% in January. – well below the 2% level the unofficial Fed target, which is considered to be consistent with price stability. 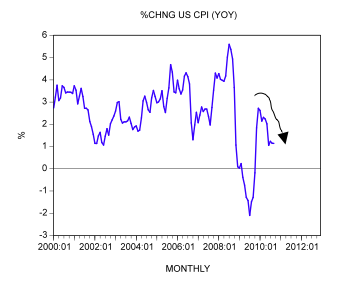 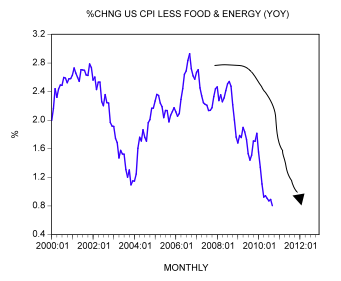 The popular way of thinking maintains that a policy of price stability doesn’t always imply that the central bank must fight inflation. It is also the role of the central bank to prevent large falls in the rate of inflation, or an outright decline in the general price level. Why is that so?

Because it is held that a fall in the price level, labeled price deflation, postpones consumer and business expenditure and thereby paralyzes economic activity. Moreover, a fall in price inflation raises real interest rates and thereby further weakens the economy. Additionally, as expenditure weakens this further raises un-utilized capacity and puts further downward pressure on the price level. Most economists are of the view that it is much harder for the central bank to handle deflation than inflation. When inflation rises it is argued the central bank has no limit as such on how much it can raise interest rates to “cool off” the economy. This is, however, not so with regard to deflation. The lowest level that the central bank can go to is a zero interest rate level.

For instance, let us assume that Fed policy makers have reached the conclusion that in order to revive the economy real interest rates must be lowered to a negative figure. This, however, may not always be possible to accomplish, so the argument goes.

When nominal, or market interest rates, are at a zero level it is not possible to make real interest rates negative when the price level is falling. Here is why.

From the popular definition that

Similarly as the economy weakens further and inflation falls to 0.5% this will not allow the central bank to target real interest rates to below –0.5%. In short deflation, or low inflation, reduces a central bank’s flexibility in reviving the economy. Hence, it is argued, the policy of price stability must aim at a certain level of inflation which will give the central bank the flexibility to keep the economy on the growth path of economic prosperity. So what should this level of inflation be? Some experts are of the view that 2% to 3% is the best range. (Fed officials are of the view that 2% is the right figure). The essence of all this is that a little bit of inflation is a must in order to have economic prosperity and stability. According to this way of thinking the inflationary buffer must be big enough to enable the Fed to maneuver the economy away from the danger of deflation, or so it is held.

Elsewhere we have shown that as a rule a general increase in prices comes on account of the increase in money out of “thin air”. We have also seen that an increase in money out of “thin air” leads to an exchange of nothing for something, or to the economic impoverishment of wealth generators. So how in the world can price inflation of 2% to 3%, which is called buffer inflation, promote economic growth and prosperity? It is absurd to regard a price inflation of 2% as some kind optimum. Contrary to popular thinking it is not a fall in prices as such that weakens real economic growth but the declining pool of real savings. (The declining pool weakens the process of real wealth generation). Also, it is not increases in real interest rates, but a shrinking pool of real savings that undermine real economic growth. On the contrary, increases in real interest rates put things in proper perspective and arrests the wastage of scarce real savings thereby helping the real economy.

Now if the pool of real savings is falling then even if the Fed were to be successful in dramatically increasing the price level the economy will follow the declining pool of real savings. In this situation the more money the Fed pushes to the economy the worse the economic conditions become. More money only weakens the wealth generating process by stimulating non-productive consumption (consumption that is not preceded by the production of real wealth). In the meantime, the yearly rate of growth of the Fed’s balance sheet stood at 6.2% in early October versus 8.5% in the month before. The yearly rate of growth of our monetary measure AMS stood at 6.1% in early October against 4.8% in September and 3.3% in August. 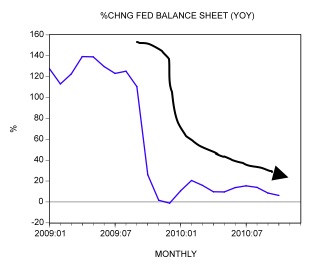 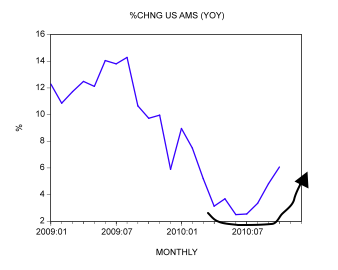 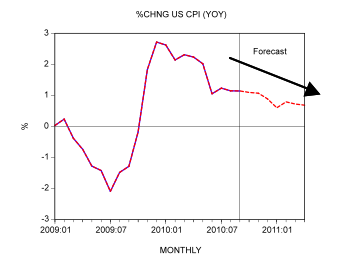