Last Wednesday (20th April) The Cobden Centre organised an exhibition on digital currencies and blockchain technology in the European Parliament, the first of its kind in any parliament worldwide. Attendees at the exhibition included the World Bank, IMF, OECD, Bank for International Settlements, United Nations (UNICRI) and Europol; it was the first time these organisations have come together for a blockchain event. Other attendees included Microsoft, Nasdaq, Barclays, academics from Harvard, UCL and Imperial and some of the most exciting startups in the blockchain space.

Blockchain technology underpins digital currencies like Bitcoin. It will enable a wider transition to a peer-to-peer economy; just as people can send Bitcoins to each other peer-to-peer without the need for a central bank, blockchain provides the technological substrate for similar systems for stocks, bonds, property and even diamonds and intellectual property. It will transform global commerce and trade – Silicon Valley pioneer Marc Andreessen called it the most revolutionary technology since the birth of the internet. Legislators are now looking at how to regulate both digital currencies and blockchain more broadly, it is essential that legislators and policy makers are aware of the potential benefits so that they can promote measured and sensible policies. The Cobden Centre is currently doing a lot to promote this dialogue and views the technology as a way of promoting Richard Cobden’s ideals of free trade and honest money.

Blockchain technology will be of fundamental importance to the philosophy of economics over the coming years. Just as the internet shaped economics, trade and political discourse over the last 20 years, so blockchain will shape the development of these areas over the next generation; it also has applications beyond finance and trade, including building communications systems which are beyond the control of third parties.

There were three roundtable discussions – virtual currencies, blockchain, and approaches to regulation. Each of the roundtables was preceded by four presentations from companies, academics and institutions. There were presentations from the IMF, Bank for International Settlements, OECD, Europol, Nasdaq and Guardtime as well as Patrick Murck from the Berkman Center at Harvard and Marco Santori from Blockchain.info among others. The discussions were under Chatham House rules and a summary will be published in due course.

The three roundtables were each chaired by an MEP – virtual currencies was chaired by Dr Syed Kamall MEP, blockchain was chaired by Eva Kaili MEP, and approaches to regulation was chaired by Ashley Fox MEP. Cobden Centre editor Max Rangeley gave the closing address to the event. Max had an op-ed published in City AM last month on how blockchain is the new intellectual battleground within economics. In the closing address to the event Max warned about how global debt levels of more than $200tn mean that blockchain technology and digital currencies may well become necessary in a shorter time-frame than many people are planning for – in the event of a systemic banking crisis blockchain technology would allow people to trade without the need for banking institutions to intermediate.

The closing address given by Cobden Centre editor Max Rangeley: attendees at the roundtables included the World Bank, United Nations, European Commission, IMF, OECD, Bank for International Settlements, ESMA and Europol (it was the first time these institutions have come together for a blockchain event).

Cobden Centre co-founder Steve Baker MP commented “At a time when the destructive effects of worldwide, sustained, extraordinary if not emergency monetary policy are becoming evident, this conference on virtual currencies and the blockchain could not be more timely. Market societies need free-market money and at last, as Hayek foresaw in the 1970s, technology is enabling that essential development.” 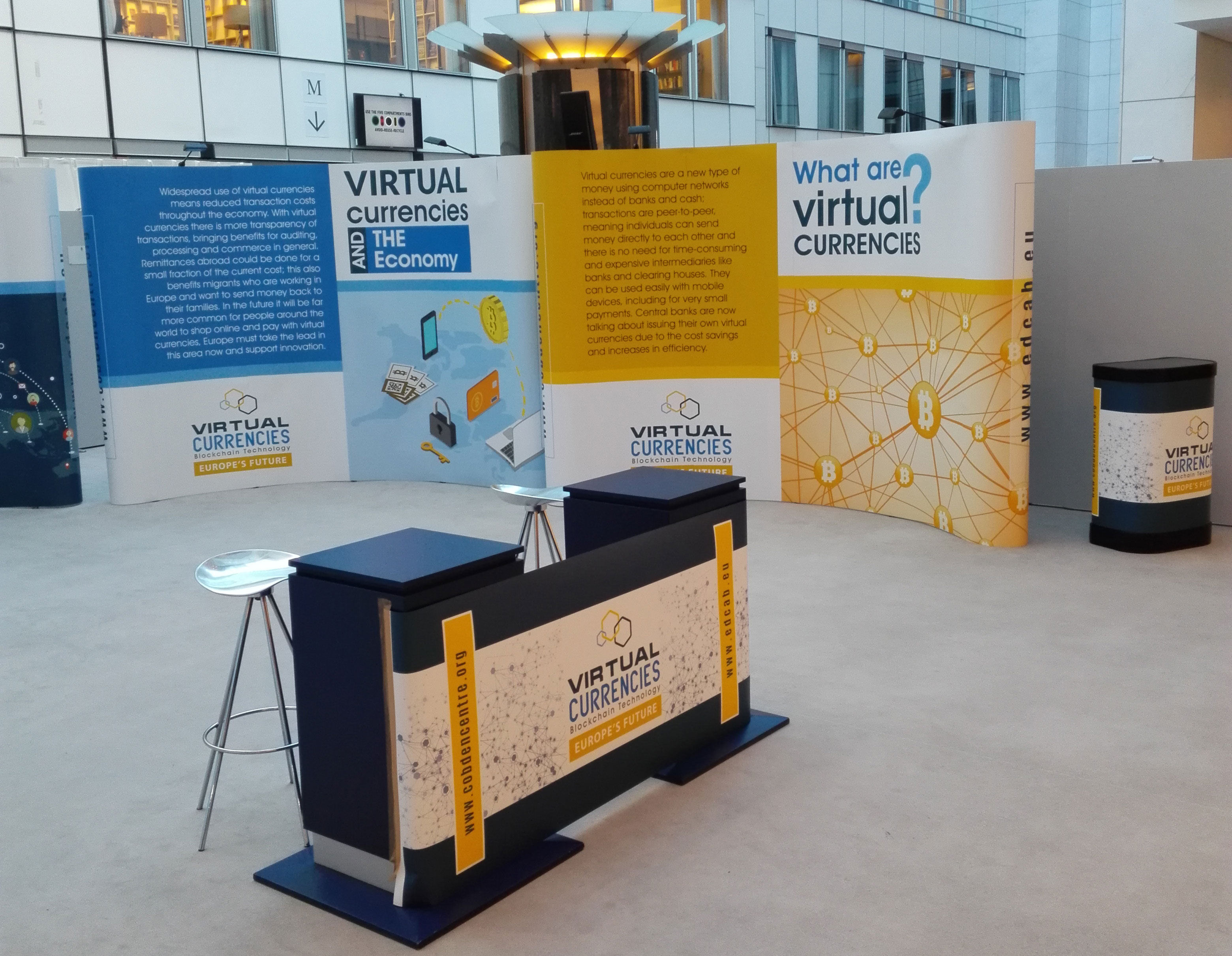 The exhibition area provided information for MEPs and other policy makers

“Blockchain technology makes not only private currencies but entire monetary and financial ecosystems possible without the need for central bank management” said Max Rangeley. “The global economy is about to take a large shift in the direction of decentralisation and disintermediation.”

The Cobden Centre is at the forefront of think tanks when it comes to looking at how new technologies will affect economies in the twenty first century. The event was organised in association with EDCAB, which moderated the roundtables.

Thank you very much to Dr Syed Kamall MEP for giving The Cobden Centre the opportunity to organise the blockchain event within the European Parliament; months of hard work paid off and resulted in one of the most important blockchain events that has taken place so far anywhere.