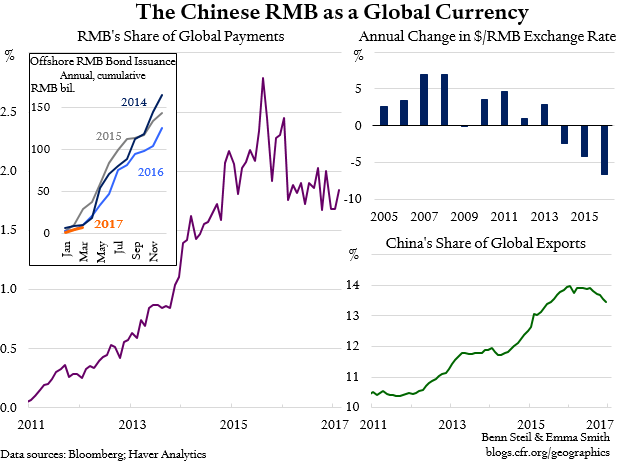 “The globalisation of the [Chinese RMB] seems remorseless and unstoppable,” the Economist pronounced in April 2014.  A year later, a research-grant foundation asked me (Benn) to review a proposal to investigate three scenarios for RMB globalization: more, much more, and way more.  I suggested the authors needed to add a fourth one: de-globalization.  I suspect they thought I was nuts.

As the year went on, it looked like I was.  From 2014 to August 2015, use of the Chinese currency in global payments doubled, to 2.8 percent of the total. But, as the main left-hand graphic above shows, most of this rise has now been reversed.  Furthermore, as the small left inset graphic shows, in 2016 use of the RMB in global bond markets was 23.6 percent lower than its 2014 peak, and is on track to fall further this year.

What has happened?  Three things in particular.

First, the dollar-value of the RMB has been falling steadily.  As shown in the top right-hand graphic, it rose nearly every year from 2005 to 2013, in total by 36.7 percent.  Since 2014, however, it has declined by an increasing amount every year—by 12.8 percent in total through the end of 2016.  With the People’s Bank of China now intervening to curb the currency’s decline (not to cause it, as President Trump seems to believe), investors have abandoned the notion that RMB appreciation is a one-way bet.  Capital inflows driven by currency speculation are over.  In its place, Chinese residents and companies are seeking new ways to move money out of the country.  In response, the Chinese government, which had previously supported Chinese investment abroad, is now steadily tightening restrictions on capital outflows. And as it makes capital repatriation for foreigners more difficult, foreigners have less reason to want to hold RMB.

Second, China has tapped out its export potential. Its share of global exports grew from 1 percent in 1980 to 14 percent in 2015, but, as shown in the bottom right-hand graphic, it has since turned down.  Those who saw China as the national equivalent of Amazon.com, selling more of everything to everyone year on year, have been rudely disappointed.

Finally, globalization broadly has headed into reverse.  Capital flows in the form of equity and bond purchases, foreign direct investment, and lending fell by over two-thirds, from $11.9 trillion to $3.3 trillion, between 2007 and 2015.  Trade barriers are up.  Discriminatory policies are spreading faster than liberalizing ones.  Merchandise trade is falling: it contracted 10 percent between 2011 and 2015, the largest drop over any four-year period since World War II.  China is therefore not only losing export-market share, but is doing so in a shrinking global market.  In consequence, the dollar-value of China’s exports has fallen by 10.7 percent since its peak in early 2015.

The net result is that the world has little if any reason to continue accumulating RMB, as it did a few years back.  The globalization of the RMB is, therefore, no longer “remorseless and unstoppable.” To the contrary, it appears to be well and truly over.

Written By
Other Writer
More from Other Writer
Never mind that the US Treasury’s indictment late last year of Switzerland...
Read More