Is the global economic recovery over?

That is the question investors are grappling with just as Q1 earnings season – the best since 2011 with its 18% Y/Y expected EPS growth – enters its busiest week yet. Meanwhile, as discussed here extensively in recent weeks, over the past two  months economic data from around the globe, but especially Europe and the US, has come in unexpectedly soft resulting in the first negative print in Citi’s Global Eco Surprise Index, and now the most negative since early 2016… 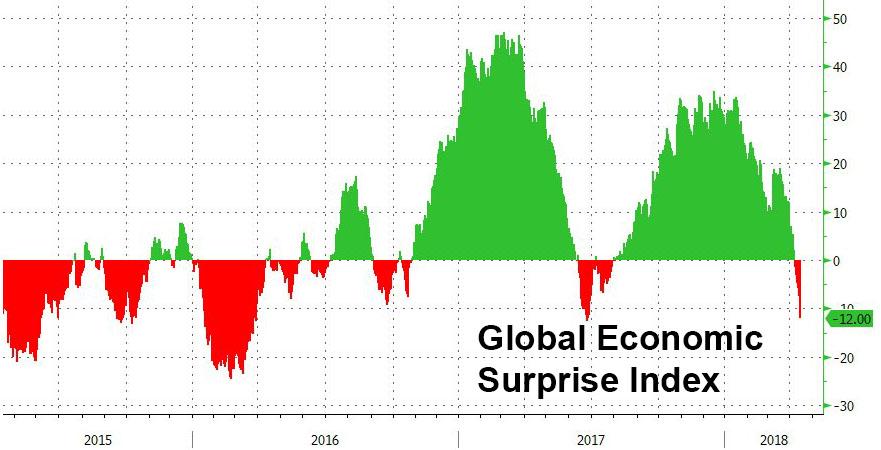 … and, more notably, an inversion in the forward OIS curve – the first in 13 years – which as JPMorgan noted was the clearest confirmation that the US economy is very “late cycle”, and that a conventional yield curve inversion (2s10s), a harbinger of recession, is not far behind. 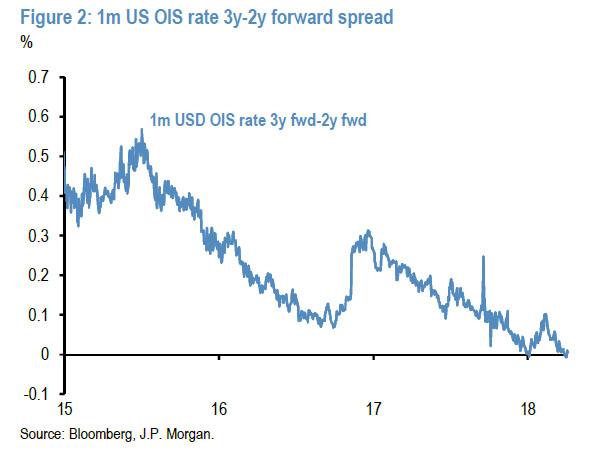 Incidentally, the topic of an economic slowdown gripping the global economy was the topic of Citi’s entire macro weekly notes one week ago; curiously, the bank went so far as to “calculate that the Fed has already moved into slightly restrictive territory vs. equilibrium rates and that further tightening from here will be a growth and risk asset negative.” 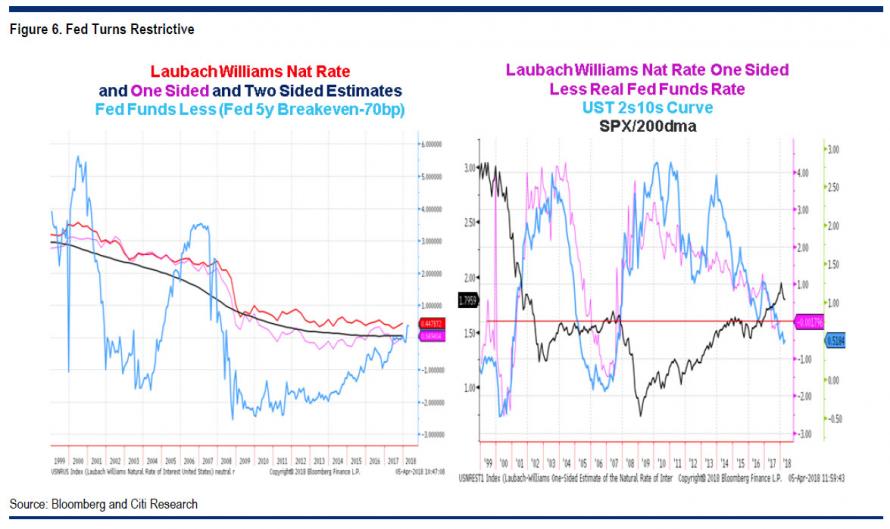 In other words, all else equal, the Fed should end its tightening cycle.

Economic slowdown worries – and indicators – aside, another critical discussion taking place in parallel is whether the market can keep rising even as yields push higher; this has become especially topical as a result of resent speculation that inflation is rising even as growth is slowing, a warning flag that stagflation may be just around the corner.

And, as Citi’s global macro strategy team writes in its latest weekly report, “one of the more contentious issues in the market at the moment surrounds the debate as to whether both equities and long term yields can move higher simultaneously. This is an interesting debate, particularly due to the fact that equity markets have failed to gain significant momentum to the upside, whilst equity market volatility has seemed to re-price back to ‘normalcy’.”

To Citi, the equity part of the debate is relatively clear: there won’t be a resolution for a while, as much of the recent pent up euphoria has fizzled and will need months to be rebuilt:

With regard to stocks, we believe the market needs time. If we take a look at relatively recent previous equity corrections that have occurred in this cycle, it seems that it can take several months of indeterminate price action until the rally continues.

An explanation for this is that when the ‘going is good’, there are lower VaR constraints, lower margin requirements and generally increasing leverage. This is until a small shock causes these constraints to tighten, forcing investors to liquidate, increasing volatility and tightening these constraints further. Perhaps Hyman Minsky was right when he said that stability leads to instability. Unfortunately, it may take a while for risk limits to reset, particularly for those that bought when the RSI flashed +80 (RIP FOMO?). 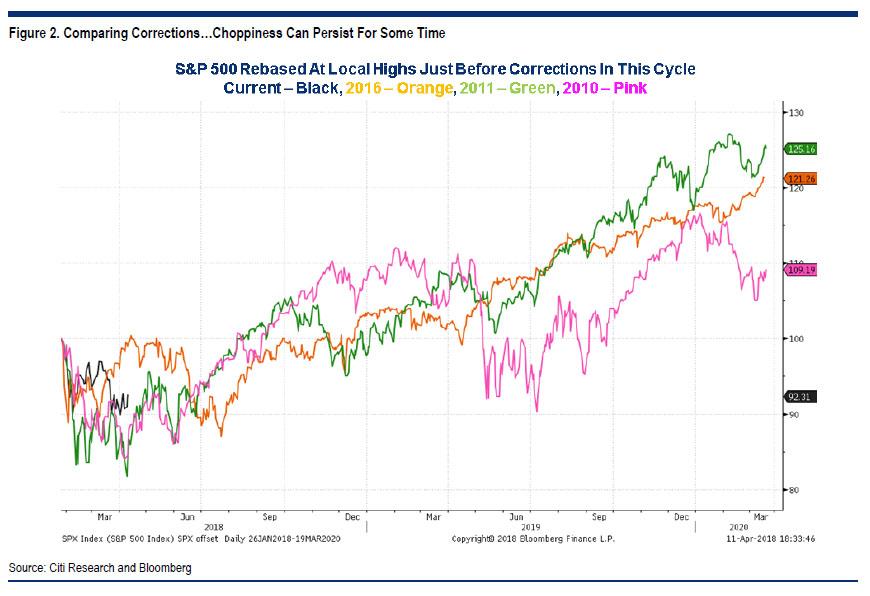 Citi also notes that the lack of upside momentum can also be explained by the “increased probability that we are now entering into a growth slowdown/ plateau phase of the cycle.” And while the bank adds that it can “certainly sympathize with this” as “currently data is indeed cooling but from extraordinarily high levels”, Citi still thinks that stocks have at least one more hurrah higher, before the rally crumbles:

we are of the belief that given the current earnings backdrop coupled with the fact some key technical levels (200dma) have held, that the market can rally back to the highs eventually (Figure 3). We continue to hold a tactical long SPX position with a relatively tight stop at 2530. For us, this is something worth risking but not with everything you’ve got. 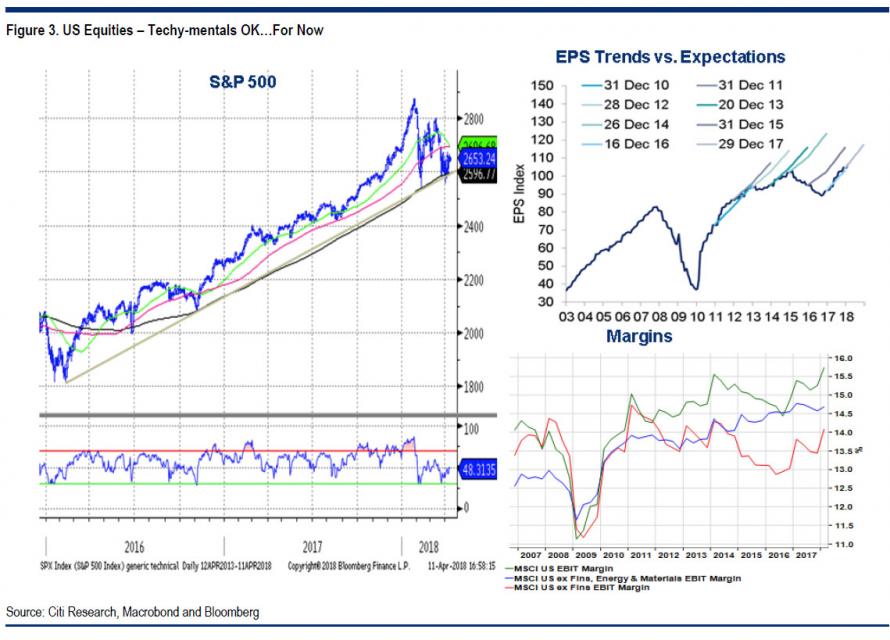 What about the far more important bond market? Here too, there have been drastic changes. First, recall Citi’s assessment from last week:

In February markets seemed to fear a shift from goldilocks to reflation i.e. higher inflation with strong real growth. However the second leg lower in equities seems to have morphed more into a growth scare led by a leg lower in base metals, an asset class that normally does well if inflation concerns are prevalent… With nominal yields, real yields and breakevens falling, money market curves flattening to price less tightening and oil also off, it’s hard to escape the conclusion that markets are suddenly less confident about the growth outlook.

Fast forward to today when the same Citi strategists double down on this incipient deflation threat, as manifested by the long-end and flattening yield curve – now at just 47bps – by pointing out that “macro enthusiasts that we speak to have been disappointed at the lack upwards momentum from 10y UST yields, particularly following the break of 2.60%. Perhaps akin to equity markets, data looks to have contributed to the consolidation in yields.” 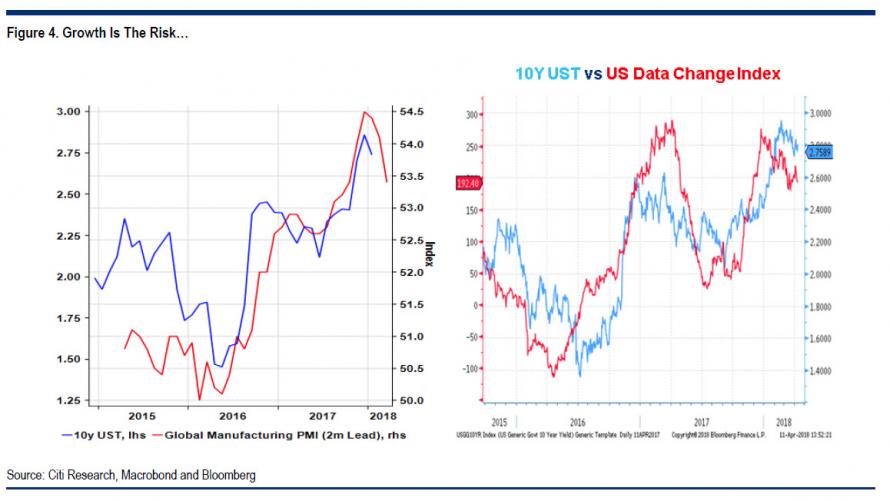 To be sure, the technicals are still somewhat supportive of the bear case, and bond bears can be encouraged by the fact that a medium term trendline has held even in the face of this growth scare. What’s more, Citi adds, as many market participants are well aware, “we are approaching a key technical level to the topside, but what’s probably more important (from a psychological perspective) is the multi-year downtrend resistance in yields that comes in around 3% (chart below, right-hand side).”

Will this key level be broken? In order to do so, Citi believes that we need to see a combination of acceleration in inflation and a Fed that is willing to let the economy run a little hot.

With regard to the former, there are gradual signs that wage growth and consumer price inflation is creeping up – i.e., small businesses are struggling to fill vacant positions right now, and paired with the subdued headline payrolls number this month, imply to Citi that there is perhaps very little slack remaining in the US labour market – although there has yet to be another similar surprise in inflation to the upside as we saw in the February AHE print; in fact, according to the latest decline in rent and shelter CPI – the biggest component of the basket – inflation pressures may now be subsiding fast.

As for the Fed “variable”, Citi repeats what it noted last week, namely “the real Fed Funds rate is probably already crossing above measures of natural real interest rates for the first time since 2007“, and yet despite this, “it’s likely that the majority of the committee will opt for continued ‘gradual’ hikes, particularly with equity markets on edge and more and more market participants questioning cyclical growth. There are plenty of risks that could ruin the party, not least the dreaded trade war.”

Still, even the Fed is now resigned that tightening will only go so far, and looking five years ahead, even the Fed’s own kinked dots show that easing will be underway:

And if not term premia are too low at the long end for such a resilient implied business cycle. For now we are opting to stick with our 5y1y – 5y10y forward steepeners3 (Figure 8). The curve can’t stay this flat, this long can it? Therefore at these levels it’s worth risking a forward steepener, in our view. 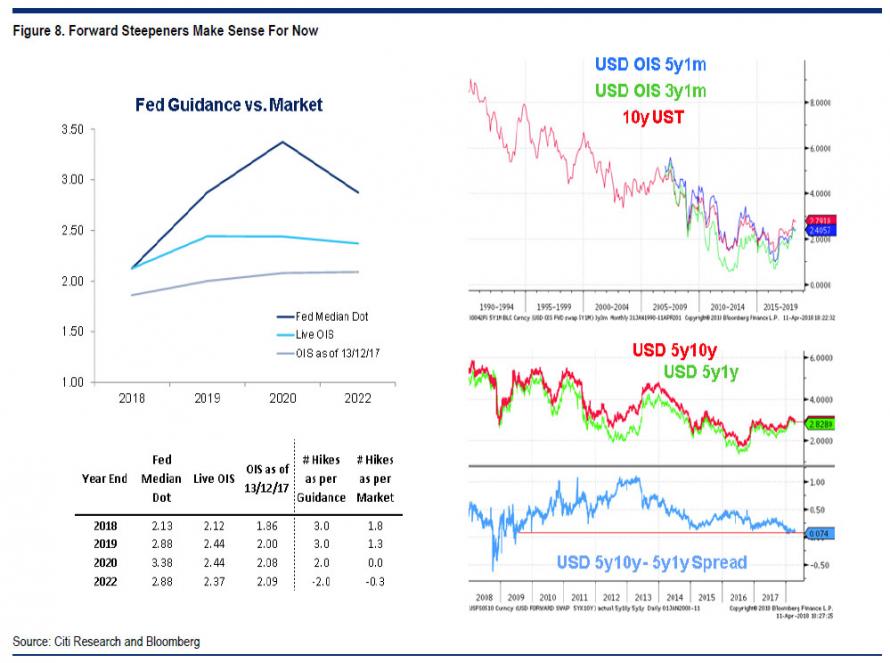 Finally, what about the broader credit market in terms of duration/overall direction? Here, as the CBO reminded us last week, net treasury supply is set to double to just shy of $1 trillion, a transition which – all else equal – should send yields sharply higher (of course, all else will not be equal if a global deflationary scare is unleashed). This to Citi represents “a massive problem” as the market has already priced in all of this, and any moves from this point out will be extremely violent, to wit:

Treasury supply (net) is set to double from circa $400bn to $800bn. At the top of the cycle, this is going to push real yields higher (Figure 9). Especially with reduced flows from the EA and Japan. But there is a massive problem. The market knows this and holds a massive duration short. 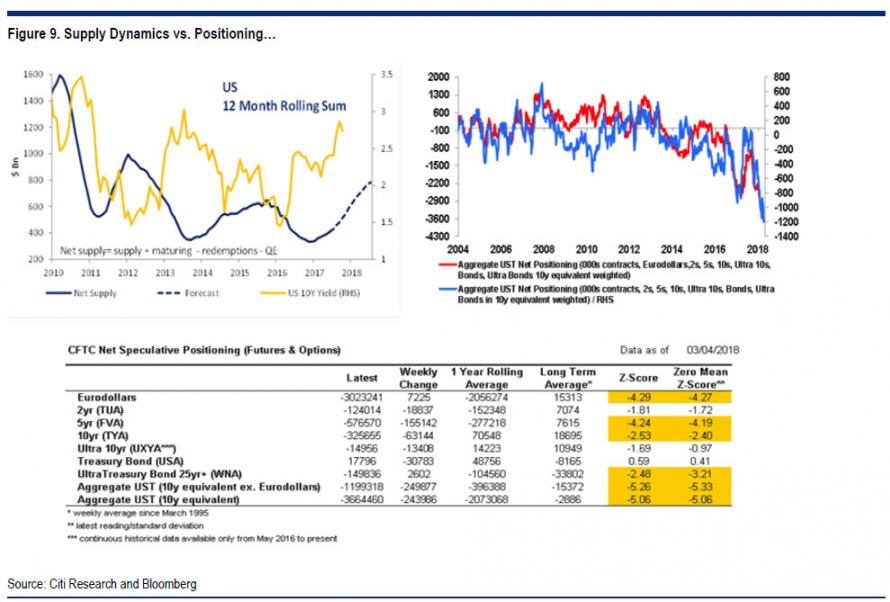 In other words, the market is poised at a very precarious (dis)equilibrium: on one hand bond traders are certain that yields will keep rising; on the other the recent sharp reversal in economic conditions threatens to flush the record short overhang, resulting in a plunge in yields, potentially as low as 2% and massive P&L losses for the spec community.  This is something Bank of America noted two weeks ago, when observing the recent dramatic inflows into Treasury funds, which suggest that a move in yields back to 2% is just a matter of time, or as BofA’s Michael Hartnett said, these Treasury inflows “are the most visible expression of positioning for risk-off to date.” 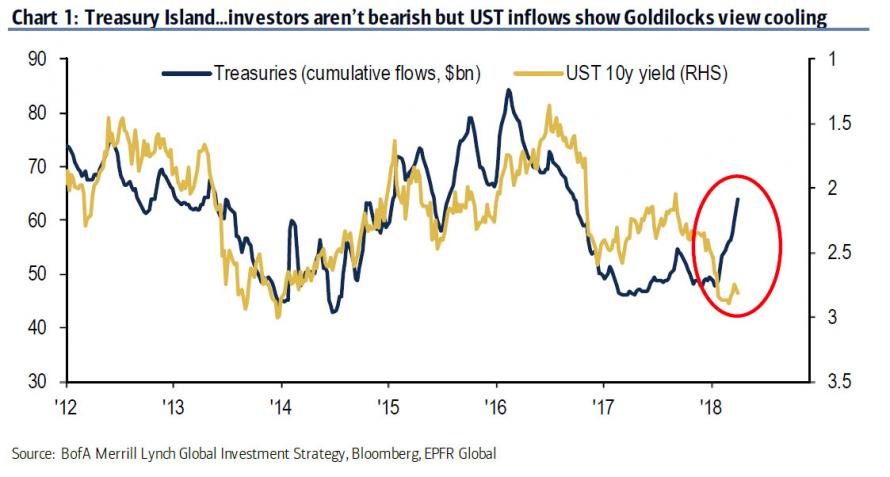 So until either fundamentals change (reversal of fiscal policy, Fed etc) or the duration short reduces, it is unlikely that anything material will change in this tense but escalating stand off between fears of economic slowdown and rising inflation. Who blinks first? According to Citi, “positions will likely give way first.”

Written By
Other Writer
More from Other Writer
by Jeffrey P. Snider The parallels between the last few years and those...
Read More

0 replies on “Zero Hedge — Citi: “There Is A Massive Problem” With The Bond Market”