In the U.S, millions of Americans live in poverty despite $22 trillion of spending on the War on Poverty since 1965. That is more than the entire national debt of the U.S.

Marriage the Best Way Out of Poverty

The most fundamental reason why the war on poverty has failed is because it has encouraged the breakdown of the 2-parent family. Marriage and the 2-parent family is the best ticket out of poverty. I shall begin by proving that marriage is in fact the greatest weapon against poverty. While there are other reasons against the welfare state, marriage is the most important factor. Marriage alone could significantly reduce poverty rates, let alone other factors.

The U.S census bureau has conducted several studies on this issue. We can first begin by comparing poverty rates between married and non-married households with children. As shown below, the poverty rate for married families is a small fraction of single parent households. 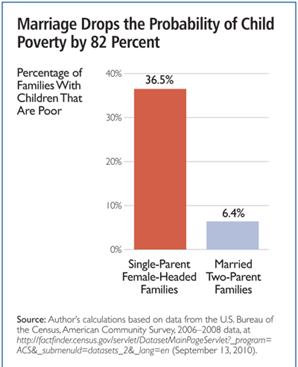 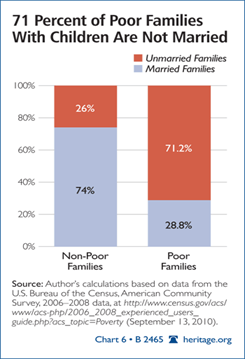 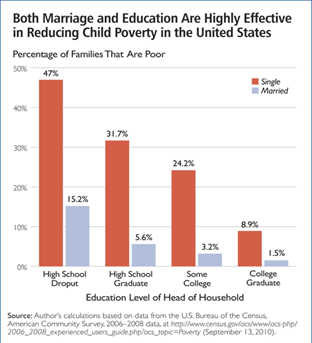 As shown above, when we adjust for education, we still find that poverty rates are much lower. For example, the poverty rate for single parent families where the parent is university educated, is 6 times higher for 2 parent families in the same position. As a result, poverty is 75% less likely when comparing single and married families where parents have the same educational attainment. 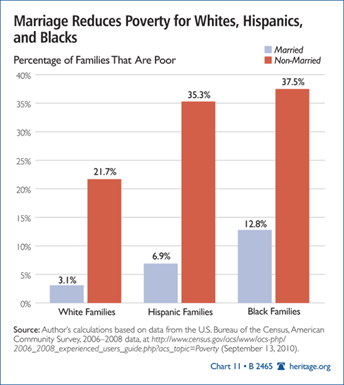 As shown, when race and level education is accounted for, marriage significantly reduces the level of poverty. In addition, married men usually have higher incomes than unmarried men of the same race and education. Hence a 29-year-old married, college educated Hispanic male makes more than an unmarried, 29-year-old college educated Hispanic male. This is validated by the US department of labour. The department of labour found that married men between the ages of 28 and 30 worked 440 more hours per year than 28-30-year-old men who were unmarried. The US department of labour overall found that 28-30-year-old married men make $15,929 more per year than their unmarried counterparts, even when controlling for education and race. The effect is a greater contribution to family income, thereby reducing the probability of poverty.

Not only does the lack of marriage result in more poverty in the present, it also increases the risk of poverty for future generations. Children living in single parent homes are 50% more likely to end up in poverty as adults. This intergenerational poverty effect persists even after adjusting for the original differences in family income and poverty during childhood (source: Mary Corcoran and Terry Adams, “Race, Sex, and the Intergenerational Transmission of Poverty).  Furthermore, the cycle of continued poverty is perpetuated by the fact that females that are raised in single parent homes are twice as likely to have a child out of wedlock.

The Fragile Families Survey conducted by Princeton and Columbia university found that there were differences in poverty rates for unwed mothers years after their child’s birth. 50% of all unwed mothers will be poor 5 years after their child’s birth. However, if single mothers married the biological father of her child, only 18% would remain poor. As a result, the probability of remaining in poverty falls by more than 60%.

In conclusion, marriage alone could potentially reduce the poverty rate in the U.S and European countries by over 60%.

How Does Welfare Tie into Marriage? 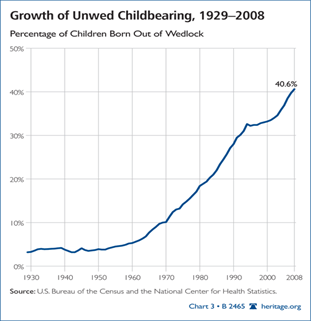 In FY2010, the federal and state government spent $400 billion on low income households with children. 75% of that money was spent on single parent homes. This implies that eligibility for welfare programmes deteriorates as a second parent’s income is added. Take a single mother with 2 children earning $20,090. This is exactly 100% of the federal poverty line (using DHHS figures for 2015). If she then gets married to a man earning $22,500, the family now composes of a married couple with 2 children earning $42,590/year. This consequently puts the family at 137% of the federal poverty line, leading to the loss of eligibility for federal welfare programs such as food stamps and Medicaid (healthcare for the poor). As a result, the welfare state discourages married households and encourages single parent households. The effect is persistent poverty and continued increases in government transfers, which costs taxpayers more every year.

The solution based on these findings is either to end the welfare state entirely or to replace the current safety net with a negative income tax. The advantage of ending the welfare state would firstly allow substantial cuts to government spending. Last year, state and federal government spent $1 trillion on the War on Poverty. These cuts could then in turn allow taxes to be cut across the board and allow the tax code to be simplified. A negative income tax on the other hand, does not guarantee that the marriage ‘penalty’ will be eliminated.

However, before the welfare state can be eliminated, barriers for the poor must be removed. The barriers include the following:

Written By
Other Writer
More from Other Writer
By Daniel Lacalle The main reason why the ECB quantitative easing program has...
Read More

0 replies on “The Welfare State Has Failed”