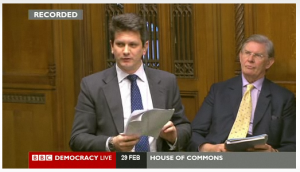 Earlier today Conservative Steve Baker MP put forward a Private Member’s Bill, the Financial Institutions (Reform) Bill, which outlines a programme of radical reforms to the banking system and calls for an end to state meddling in banking. Steve is co-founder of the Cobden Centre, and has been MP for Wycombe since May 2010.

The underlying principle of his Bill is to minimize moral hazards within banking, by making those who make or preside over risk-taking as liable as possible for the consequences of that risk-taking. Since financial institutions often circumvent rules, the Bill also includes mutually reinforcing measures that minimize scope for evasion.

Within this framework, bankers would be free to do as they wished, but they would bear the consequences of their own actions.

Thus, Steve’s Bill addresses the rampant moral hazard problems within the modern banking system, and this is the central issue in putting the banking system back on its feet and restoring its integrity. Indeed, his proposals provide nothing less than a free-market solution to the current banking crisis

I would therefore ask all supporters of free markets to promote this Bill and to push for similar measures in other countries.

One key provision of the Bill is to make bank directors strictly liable for bank losses and require them to post personal bonds as additional bank capital. These measures reaffirm unlimited personal liability for bank directors, and will rule out all-too-familiar “It wasn’t my fault” excuses on their part.

The Bill also calls for bonus payments to be deferred for five years, and for the bonus pool to be first in line to cover any reported bank losses. Any reported losses would be covered first out of the bonus pool and then out of directors’ personal bonds before hitting shareholders.

These measures would provide strong incentives for key bank decision-makers to ensure responsible risk-taking, as their own wealth would now be very much at risk.

Amongst other measures, the Bill:

Further details of the Bill can be found on Steve’s website:

4 replies on “The 2012 Baker Bill: a programme to end financial crises”