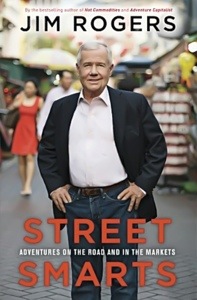 In China, eight is the lucky number. The Mandarin symbol for eight is a pictogram representing a side of meat being sliced in two, in infinite progression. This forms the symbolism of multiplication and increase, in the same mythological way that the biblical story of Noah represents multiplication and increase, two by two by two, giving us this same powerful, capitalistic, and mystical number of eight.

For where chapters one to seven of Jim Rogers’s new book, Street Smarts, are a wonderful how-to-get-rich and rags-to-riches story of his life so far – including a description of his wedding in Henley-on-Thames, a town where I also got married – he really pulls out the economic meat cleaver in Chapter Eight. He begins to lay it, at first, into Alan Greenspan, and then rolls up his sleeves before setting to work with Ben Bernanke, Timothy Geithner, and Uncle Tom Cobley and all, with a fiendish delight which had your author calling for more Pinot Noir to appreciate the greater subtleties of the author’s carefully-crafted words.

Chapter Eight is thus a joyous chapter to read as this maestro of real-world global investment lifts the withered fools-gold slab of Keynesianism and exposes the insectoid Krugmanite creatures below to a well-deserved blow-torch of common sense, slaking them in a coruscating fire of simple concise words, well chosen, and written in the flowing liquid style of a master wordsmith craftsman.

For Jim Rogers is far more than than meets the eye on financial news interviews. Wherever he’s been, in whichever geological strata of life he has found himself, he has risen inexorably, like a molten volcanic stream of gold, improbably filled with diamonds, to the very surface of that strata. And that includes the rare earth mineral layer of superlative writers and teachers.

Fortunately, even by the close of his pivotal Chapter Eight, Rogers is far from finished. For the wonderful and refreshing pummeling continues apace in Chapter Nine, which ends with the Frank Borman quote, “Capitalism without bankruptcy is like Christianity without hell,” a hearty tagline I’m sure the illustrious Joseph Schumpeter would have appreciated.

And so the unwinding story of Jim Rogers and the entertaining dance of his thoughts continues onward towards distant future prospects, until the unwanted end of the book in which I was left pleading with the author for more. Alas, for the world’s hard-core band of dedicated Misesians, the horse-frightening words of ’Rothbard’ and ’Mises’ fail to show up in any part of the book. However, you can still feel their willing paired ghosts standing in the shadows throughout the entire manuscript, urging Rogers forwards in his clinical evisceration of America’s supine political class, which has sleepwalked Paine’s and Jefferson’s America into the socialised, regimented, and bureaucratised United States of George Walker Bush and Barack Hussein Obama.

One especially feels this Misesian support with Rothbard’s bow-tied ghost, willing on the bow-tied Rogers to land yet another skewering blow into the heart of the Washingtonian beast, which is strong-arming the United States into the same destructive chasm as the draconian Athenian empire, whose hated and once-almighty Delian league was eventually wiped from the ancient classical map by the lowly and simplistic Sparta (metaphorically, read China).

Bring the troops home, let bankrupt companies fail, shrink the state, bring back liberty. These are the heartfelt messages of Rogers. Truth, wealth, and freedom thus abound in the pages of this wonderful book.

And these are messages Austrians everywhere can believe in and subscribe to, as we march on the eternal road towards knowledge, harmony, and peace.

And if you’d like some excellent investment tips too, then this really is the book for you.

This article was previously published at The Euro Vigilante.

I have just stumbled across this excellent article in the day before yesterday’s Wall Street Journal. It is not only a good read but,…